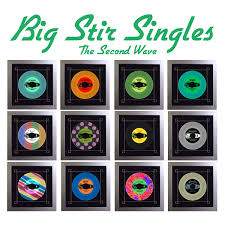 New compilation bringing together tracks from Big Stir’s Digital Singles Series and follows up the recent The First Wave collection….Even LTW’s Ian Canty can sense something is happening here…..

The single will always be the ultimate Rock & Roll format whatever happens (Albums? They’re for Jazz!). So many attempts have been made to kill it off, lessen its the impact and sideline it, but the tough little blighter keeps on bouncing back. The smart brains at Big Stir HQ realise this and are giving the classic 7″ inch format a new spin in their Digital Singles Series, which this excellent new collection expertly compiles. Let’s make no bones about it, something is definitely happening here, something special indeed. A real community of different artists coming together in a true DIY spirit to achieve their mostly noisy, sometimes more serene, but always stylish Pop goals.

In a way it is ironic this is the next thing I’ve written about since the Optimism/Reject boxset (reviewed here), as Big Stir in effect remodel that ethos for 2019, producing their own fanzine as another line of communication alongside their record label’s output. Though like-minded in their pursuit of Pop nirvana, the groups that are represented here have a variety of different approaches in achieving that aim. The singles are all true double A-sides, featuring two prime tracks with no real throwaway efforts included. On the CD they run with the top sides 1-12 and flips 13-24, but it makes sense to review each artists’ offerings together as we go.

Opening up The Second Wave we have some fine jangly Pop/Rock courtesy of Spygenius on If You Are Roving. Not wanting to repeat themselves, their second offering is the cool and Funk-tinged Let Me In, which would be a floor-filler at any Indie Disco. Joe Normal And The Anytown’rs give us the tough ’79 New Wave of Don’t You Hurt Me and pure guitar rush on their theme Anytown, then Clifford Ulrich slows the pace a tad, touching on acoustic Folk Pop with a twist of Greg Kihn on I’m Going To Miss Her and Like A River Glorious.

Sweden’s In Deed weld the classic 60s sound to a Punk attitude on Don’t Need, Don’t Care and the humourous and attractive Marry Myself is a goodie too. Their album Everest has also been reissued by Big Stir recently. All female band the Kariannes’ This Song Is A Cure wittily steals a little from In Between Days in its joyful surge and they follow up with Every Word Means No, stuffed full of cool guitar breaks and upbeat drumming. The Living Dolls’ Everything That Happened hits that sweet spot directly between the Only Ones and Jonathan Richman. It really is a peach and Happy Manors’ arch storytelling proves they have a few more strings to their bow too.

Taking things in another direction are Charms Against The Evil Eye, who on Where Are You Living and Oscar sound spooky, inventive and and a little Psychedelic. The Ex Teens, who hail from Los Angeles, provide two brilliant tracks in the form of the pumping and vital Good News (For Shut-Ins) and The New Victorians, the latter a withering put down of the insane times we find ourselves living in. Full of attitude and brash vim, this band is one of many on here I’m itching to find out more about. Popdudes, who include writer John Borack (he also wrote the sleevenotes to The Second Wave), have a neat Country Rock swagger on Chains and do justice to the classic Roy Orbison number Dreams on their other selection here.

Anton Barbeau performs here in two different guises as Kenny and Giacomo & Carolina. Kenny hark back to the Strawberry Alarm Clock on My Adelphi Twin, a enjoyable trippy romp. As Giacomo & Carolina Anton crosses Reggae with Electropop on Jah Rosie, The Dainty Beast. It doesn’t quite come off on, but he’s clearly someone to keep an eye on, a real Pop maverick in the making. The Armoires, who include the founders of Big Stir Christina Bulbenko and Rex Broome, yield the flute-driven (How Did You Make) A Mistake Like Me? and the back and forth between male and female vocals on Not A Good Man works very well. It is left to Amoeba Twin, from Stourbridge UK, to bring things to an end with the riffy youthful abandon of Suit & Tie and Caught In the Middle. An excellent compilation, stuffed to the gills with winning tunes, ideas and variety.

What is a crying shame is that this music isn’t all over the radio, which is its natural home. It is perfectly suited to boost one during a trying day and make your spirits soar on a good one. In the UK we have a load identikit commercial radio stations playing the “best music of the 70s/80s/90s and today” which isn’t even true, just the same old played-out hits every single day. Meanwhile the BBC options are desperately trying to show that they’re “with it man” and failing, like a grandparent trying to be hip at a wedding. So the bulk of the excellent new music being made today has precisely nowhere to go.

Come on, let’s shift these log-jamming oldies to the fringes where they belong and play some of this kicking new stuff, starting with The Second Wave. This is music that truly lifts the soul, makes you feel that life can still be fun, that anything is possible. It even gave this aging bag of bones a shot of fresh vigour. That is something you can’t put a price on, that leap of your heart and a touch of romance that makes it feel so good to be alive, something only quality Pop Music can do. Big Stir on The Second Wave gift you tonnes of the stuff. Like a welcome breeze on a boiling hot day, The Second Wave is a pure burst of cool.