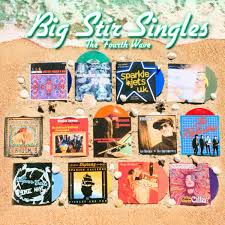 Fourth collection of Big Stir’s coveted Digital Singles series, with 25 tracks released over the final 6 months of 2019…LTW’s Ian Canty hears the now sound of today shoot the damp final knockings of winter with a warm burst of energy

Four volumes in and Big Stir’s collections drawn from their Digital Singles series have proved themselves to be pretty much indispensable. The compilers’ informed ears are primed to pick out the very best exciting and enthralling pop music that is going on in the present day. These new, or at least unfamiliar, bands and artists excel over the single format, it’s a great way to introduce these discoveries in the best possible light. Taking a real DIY approach in all they do, Big Stir have managed to subtly push both the single and the compilation back to the forefront of modern rock & roll – something which is smart work indeed.

The rigorous approach employed helps to ensure that The Fourth Wave doesn’t dip the quality of the previous entries one iota, presenting another completely refreshing and invigorating blast of the sound of today. I myself get a real rush when one of these drops through the letterbox and I hope I can instil a similar enthusiasm in you with the review below dear reader, or at least stir (sic) your interest to investigate further.

There’s a great deal to get our teeth into here, so let us get cracking. The format of the album follows a simple but effective pattern. We first have the a sides of the singles and then the flips, but for the purpose of this review I will group the two cuts by each band/singer together.

Sparkle*jets U.K. start things off with a lovely version of Alex Chilton’s The Ballad Of El Goodo. Given the origins of Big Stir’s name this is an apt way to begin and they’re back later with a Chris Bell song You And Your Sister as its b side. These are both finely crafted and cool takes, with a nice lightness of touch being utilised. Next we have a real thumping monster in Behind The Eight Ball, classic tough pop/rock with cowbell very much on the menu as well as some choice harmonies behind the power. The band Broken Arrows marry clever songwriting to killer tunes here and on their second offering Shroomitized, which also has some neat psych undertones.

Talking of which there is a sliver of Teenage Kicks to the Reflectors’ Teenage Hearts, which I can only think is a deliberately clever bit of referencing. Anyway, the band’s own tuneful talents provide us with a prime piece of new wave pop and the sharp attack of their second piece Desert Crusader is great stuff too. Carol Pacey & The Honey Shakers come across like a US Primitives on their a side Crumb and also impress on their full-throttle version of the Violet Femmes’ Add It Up. Spanish Galleons by the oddly named Shplang is quite wonderful, a beautifully evocative vocal duet with sweeping chords. They follow it on the second side with the enigmatic acoustic strum of Pickles Are Fun.

Dolph Chaney’s new album is out soon and if the perfect pop crunch of It’s Ok and the witty I Am The B-side are anything to go by, it won’t be one to miss. Both tracks are highly enjoyable with real hammer. Sonic Wave by the Vapour Trails is all cool jangles and breathtaking harmonies that build up an excellent head of steam, it’s woozily wonderful. Their flipside is a sunny folk pop number called Drowning As I Fall In. Armstrong’s Love Hate Passion And War is like some long forgotten but beautiful Cherry Red single from the early 80s, mysterious and irresistible. Their other track September Skies is also a pearl and I anticipate their next moves with interest.

If you are a fan of Elvis Costello, Joe Jackson etc The Hangabouts update that new wave sound for 2020 in a brilliant way. Great cutting songs with choice musical settings, their Who Wants Cilla is in turn both classy and punchy. Mrs Green, their b side, reminds me a bit of the Hollies late 60s period. Which seeing as that band were right up there with the best back then, is praise indeed. Blake Jones & The Trike Shop sound truly great and their song Soft Rock Girlfriend full of great lines like “it’s the near-pleasure of Soft Rock” which hit the nail squarely on the head. I’ve certainly had partners who look at my outré musical tastes in total incomprehension and anyone who has experienced similar will really find a lot to love here.

Catnip For Cupid by The Persian Leaps rocks mightily, a great piece modern psychedelia matched by the powerful attack of their other song Sweet Nothings. I’ll be honest and say that The Walker Brigade’s version of I’m Tired from the film Blazing Saddles just shades the cool rush of their own Tower, but that’s because I just love their take of this Mel Brooks number. It’s such a delicious novelty you could eat it. Finally Big Stir favourites Joe Normal & The Anytown’rs gracefully chug with power on their excellent Even Now.

So there it is, loads of cool new names to check out pumping out great material to see us through these last, very damp, days of winter. This is what the radio should be like, songs that will really brighten a day more than any played-out oldies. The Fourth Wave is stuffed with memorable music that just makes you feel good to hear it, good to be alive. Big Stir need your support and in return you get some of the best tunes you’ll hear in many a year – that’s a deal you would be foolish to ignore.