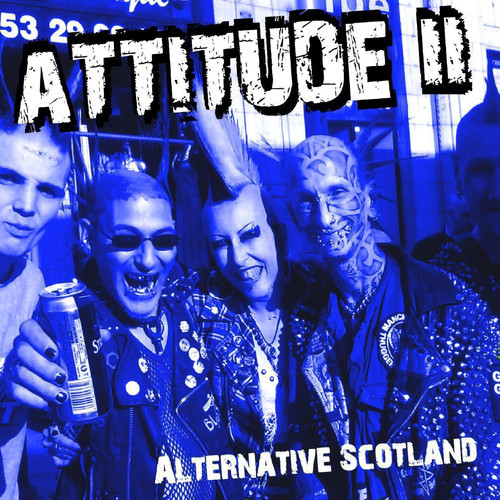 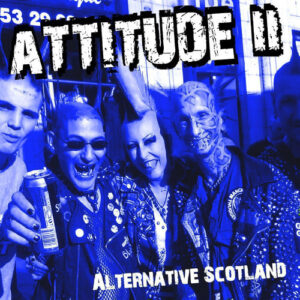 I reviewed “Attitude Vol 1” last year and gave it a ten out of ten write-up. That wasn’t any kind of bias on my part, it genuinely was one of the records of last year and still stands as probably the best Scottish punk compilation in decades if not ever. Following that was always gonna be a bit of a struggle but thankfully, whilst not being quite as immediate as Volume 1, this next instalment has kept the standard high and the energy bursting out of the speakers. The Snipes frontman Shug O’Neill has again helmed and curated this album and once again we doff our metaphorical battered top hat in his direction.

Stars of the show on this ‘un are undoubtably Dundee’s finest, The Eddies. Setting down a fairly daunting marker for the rest with opener “Na Na Na Na Na Na” sees their swerving, speed-thrill gonzoid punk take no prisoners whatsoever. Recalling the best of NYC ’76. they’re clearly destined for bigger things. Their second outing, “Lost Years”, is equally as enthralling and they’ve clearly taken influences from much more than the typical punk rock ghetto, with shades of powerpop, classic rock songwriting and 60’s bubblegum.

Nine Bullets have been making waves with their debut album Nine Lives. Appearing on the new band stage at this years Rebellion Festival will surely see them become a scene staple outside of Scotland.  “Parliament” and “Aw Right Pig” are good markers of their righteous racket. Megan on co-vocals has sheer star quality written all over her, too.

Hateful and 4 Past Midnight are both well-known in Scotland for blistering, kick-ye-in-the-face quality punk rock; Hateful’s “Cool Impossible” has elements of The Clash and is as big an earworm as you’re likely to hear whilst 4PM’s “Punk Rock Noise” is a statement of intent from these stalwarts of the scene.

Buzzbomb contribute “Collateral Murder”, which, while commiting the Joe Whyte critical no-no of being a punk band writing a “song about soldiers getting killed” is forgiven for being a popping, fizzy piece of Ramones-a-go-go and “Train Of Consequence” which reminded me of all the good things about 70’s punk and being a teenager.

Vegetable Truck, who rarely appear live or on record, contribute “Everything” and “Civilisation”; they’re the mystery band of the set and remind me of Motorcycle Boy, the Shop assistants and Sarah Records probably more than is good for me. They are, however, on-the-verge-of-collapse-genius but it’s chaos in a very good way indeed. This seems to be the only video of them but it’s pretty indicative of where they’re coming from…

Subvision are currently the most-improved band of the current breed; I saw them twice this last year and they’ve taken dramatic steps into becoming very much their own thing. With elements of D-Beat and metal, they’re the punk scene band that are as extreme as they are likeable. “Sad Situation” and “Empathetic Void” are paint-stripping behemoths that captures the bands live fury very well.

The Brothel Corpse Trio are psychobilly nutters that have members of Buzzbomb in their ranks and their “Come Die With Me” is as deranged as anything from Klub Foot. The Bucky Skanks are a punk/ska/reggae crossover and contribute two sterling tracks whilst Splinter round off proceedings with some old-school punk rockin’ with “Era Collapse” in fine style.

With many Scottish bands crossing the border for both Nice And Sleazy and Rebellion this year, the tartan punk warriors’ reputation continue to grow apace. Volume three is eagerly awaited.