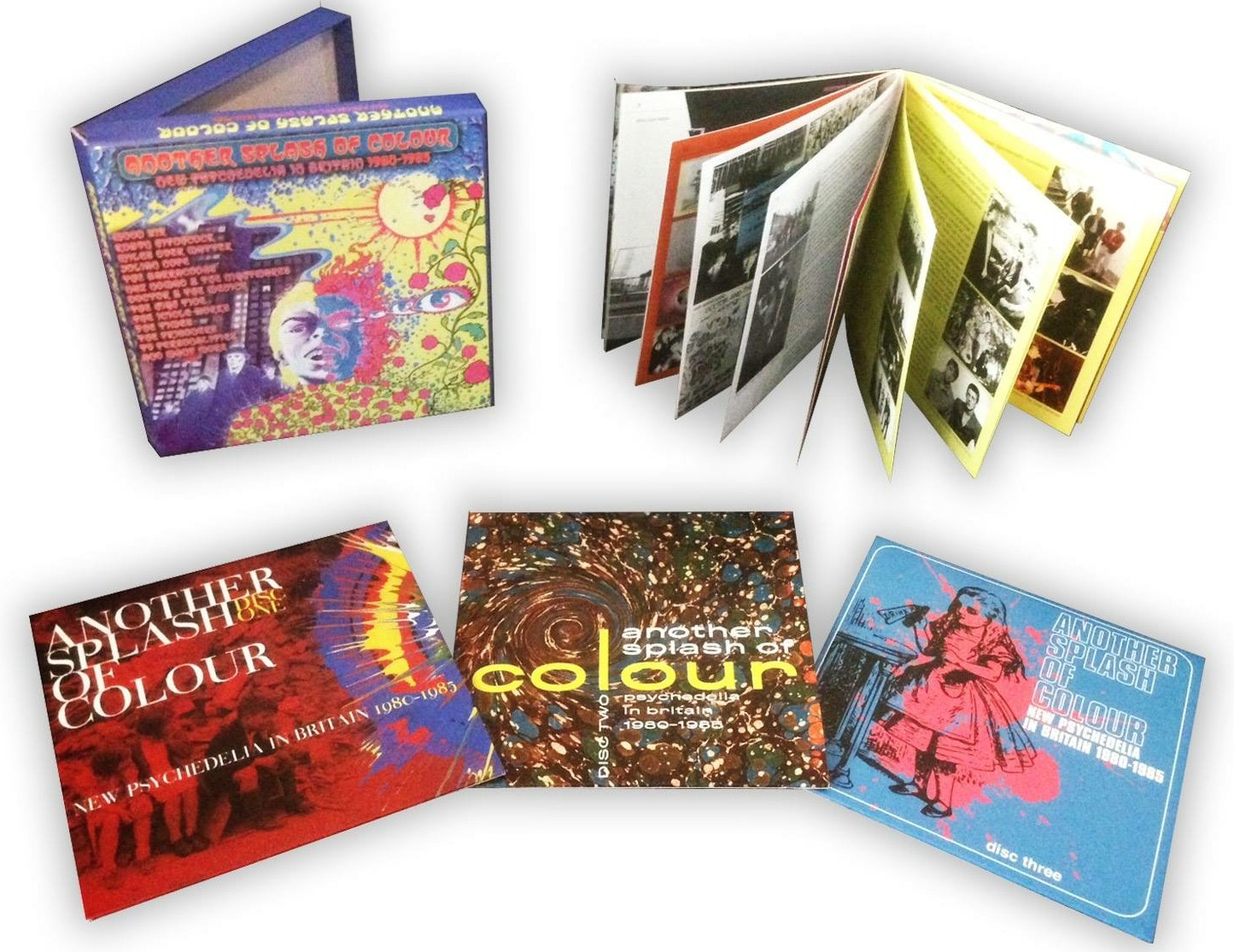 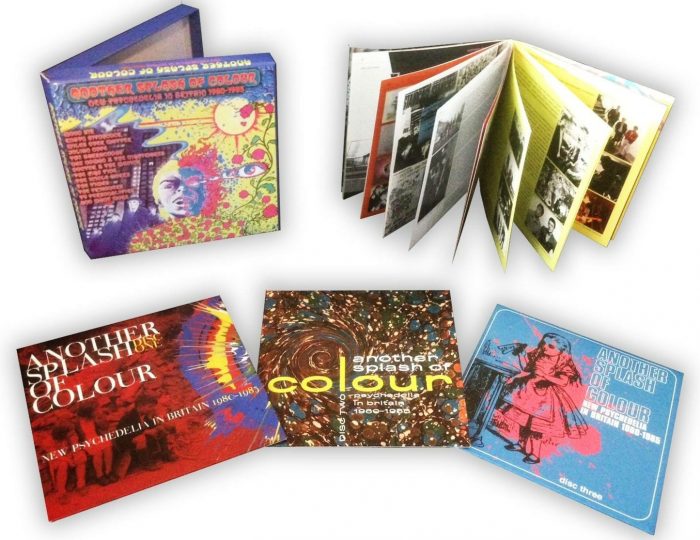 Another Splash of Colour- New Psychedelia in Britain 1980-85

Expanded re-issue of the cult British compilation, featuring over 60 names that include Julian Cope, Nick Nicely, Purple Hearts, Mood Six , The Revolving Paint Dream and The Damned, and lavishly packaged as a box set with great artwork and an in-depth booklet capturing the scene, written by ex NME journalist and King of the Indie Historians, Neil Taylor.

In the early ‘80s an underground psychedelic movement rose from the Mod scene, powered by London clubs The Groovy Cellar and Alice in Wonderland. Without saying too much about its history – because Neil Taylor goes through it with a fine toothcomb in the booklet that comes with this box set- the music itself was incredibly varied and diverse. Sonically speaking, with fashion and lyrical content aside, unlike the current psychedelic revivalists that emulate the sound and production styles of the late ‘60s with meticulous detail, a lot of the music on this compilation is mainly informed by the psychedelic era, rather than trying to be it. Having said that, there are other bands and artists here who really go for the psych prize.

Psychedelia has always been a very broad pallet anyway, but even so, many of the songs here would have fitted just as comfortably on other compilations centring on the ‘80s underground, such as C86 or Cherry Red’s Scared to Get Happy (Some names here actually do feature on those compilations, such as Jasmine Minks, Monochrome Set, Biff Bang Pow! and Blue Orchids, but others wouldn’t have been out of place there either).

Forgetting the dress code entirely, the music on this box set falls roughly under 2 camps. Some of the artists and the songs are obviously influenced by ‘60s psychedelia, probably via Nuggets or Pebbles, or perhaps having taken the nod from The Jam’s Sound Affects. Despite the typically ‘80s production sound that always jumps out, no matter what style of music, these bands have clearly taken some psych trademarks onboard, be it vocally, studio effects, guitar riffs or song-writing. Nick Nicely and The Times are great examples of this. Then there are others, who leave you scratching your head, wondering how they’ve ended up on a compilation that is dubbed “New Psychedelia”. With no prior knowledge of their fondness for paisley shirts or hallucinogenics, listening to some of the music here, for example The Primevals (Where Are You) or Playn Jayn (In Your Eyes), seems like anything but a psychedelic experience, no matter how much you stretch the psych borders, which were pretty wide to start with.

So really, we could either just accept this box set as a collection of great British underground music of the early ‘80s, or it would have been better to keep it down to just 2 discs. I can live without the pub rock cover version of Syd Barrett’s Gigolo Aunt by Knox, for starters. The Damned are also here, under their psychedelic pseudonym, Naz Nomad and The Nightmares, covering The Electric Prunes’ I Had Too Much To Dream Last Night. Love them as I do, bless ‘em, The Damned don’t really add anything to the original version, so perhaps their real contribution was to open the minds of their audience and get them listening to the mid-to-late late ‘60s garage & psych bands that they covered on their Naz Nomad album, Give Daddy The Knife, Cindy.

OK, now for the brilliant stuff I can’t live without. The Revolving Paint Dream was the brainchild of Andrew Innes, who has since been performing guitar and keyboard duties in Primal Scream. The LSD-drenched Flowers in the Sky was one of the first singles released on Creation Records, and that label is also represented here two more times, with the label boss Alan McGee’s own band, Biff Bang Pow! who deliver another obviously psych-influenced belter, A Day Out With Jeremy Chester, and again with the brilliant mod-psych genius of The Jasmine Minks’ Mr Magic.

As well as the above, Robyn Hitchcock’s It’s A Mystic Trip, Julian Cope’s Sunspots and both Nick Nicely songs, Hilly Fields and 49 Cigars are must-haves, and among the highlights of the set.

Edward Ball is sadly one of the most underrated and uncelebrated songwriters of his generation. One of his early singles as The Times, I Helped Patrick McGoohan Escape is yet another highlight, with its cheeky nod to Spencer Davis group, injecting a big syringe full of fun into this set.

Ed’s musical borrowing always stayed on the right side of acceptable, and he always created something new and loveable by wearing his influences on his sleeve. It’s a shame that the Television Personalities (of which Ed was also once a member) track included here is a live version of The Dream Inspires, rather than the original studio recording, which is far superior and entirely different, both melodically and instrumentally.

The Heartbeats’ dreamy Forever and Purple Hearts with their Hazy Darkness are good examples of the way The Jam played a great part in diverting the Mods towards more psychedelic pastures. The Way Out sound like they’ve also been down that road, and their charging bass-driven stomp of Do I Have To Be There suggests that they may have also taken another diversion, to learn a thing or two from The Teardrop Explodes. That’s a good thing, of course.

Another Splash of Colour is a great snapshot of a chapter in British alternative music, and with its rollercoaster ride of varying musical styles, its psychedelic mission statement seems in some cases more of an attitude or a state-of-mind approach. Christian Paris, one of the men behind Alice In Wonderland (the other being the pre-chart topping Clive “Doctor & the Medics” Jackson) best describes it with this quote from the booklet: “Psychedelic is something that happens which is conjured up by the word itself. The colour of the word sums it up. Something could be psychedelic that has nothing to do with the ‘60s, and nothing to do with music.”

Another Splash of Colour on Facebook. Available on Amazon and from Cherry Red