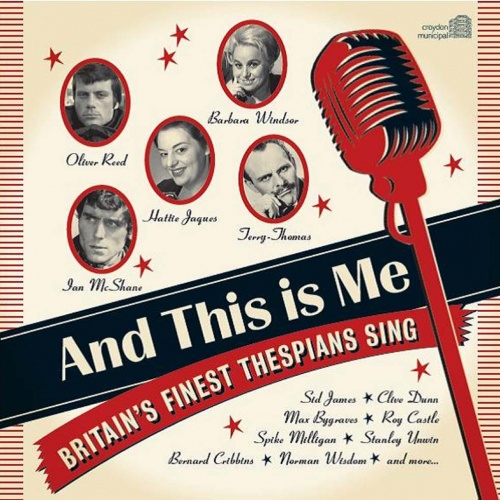 Various Artists – And This Is Me: Britain’s Finest Thespians Sing

Round up of some of the finest actors and comedic talents this country has ever produced attempting to get in the Pre-Beatles Hit Parade with novelty records, themes and other eccentricities….Ian Canty opens up another fascinating selection box from Croydon Municipal…..

Here’s some “Celebrity” vanity recordings projects – Oops perhaps I shouldn’t have said that, the image of Peter Andre and Jordan tunelessly rendering some nonsense called “Insania” probably jumped into your head and I can clearly hear the collective mice of the internet clicking away from this page like death-watch beetles. So I’ll rephrase that: what we have here are some of the best loved talents from the 1950s forward that ever graced the UK TV screen and cinema too with some frequently astounding (and more often than not baffling at the very same time) musical offerings.

I suppose this compilation would be bemusing to people who never experienced the screen roles and various personas taken on by the stars present here. So obviously this release will attract only a fairly slender target group of 50s obsessives, television comedy fans and people who grew up with these wonderful characters enriching their daily lives through the idiot box. But isn’t that the way with most things anyway?

For people who find themselves of that number there is a vast amount to enjoy, whether it be Clive Dunn revealing his inner Benny Hill many years before “Grandad” with “Such A Beauty”, or Hylda Baker worryingly speculating on “Makin’ Love” (but actually having a rather good shot at Rocking and Rolling in between the comedy asides). I’m not too proud to say a tear or more was in my eye listening to Eric Sykes and Hattie Jacques’ “We Go Together” that goes back to witnessing their natural chemistry as brother and sister in the “Sykes” comedy show in the 1970s, perhaps people not privy to that experience would see it as just another MOR Easy Listening song, but we know better eh, um….”kids”?

I have a great deal of love for the other two duets here other than Eric and Hattie’s love in and both feature fellow Carry On veterans. At the present time I can’t think of anything more fun than Sid James and the gorgeous Liz Fraser (and I’m making no attempt to be neutral about Liz, been in love with her for years!) being cheeky with calypso and they get the duke over Barbara Windsor and Harry Fowler with the rather squeaky “It Had Better Be A Wonderful Lie” even though that too has its moments.

For Ian McShane and Oliver Reed, putting down their efforts on wax probably appeared to them the first step towards a crossover career as teenage heartthrobs as they play things with a relatively straight bat. It wasn’t to be, but both put in good enough vocal performances, with Reed’s queasily strung “Lonely For A Girl” being a particular treat. Even Spike Milligan steps away from his manic comedy image to have a go at a ballad on “Wish I Knew” and to be fair he has a pleasant voice. Norman Wisdom lays the Cockney on thick on “Yer Gotta Get Aht” which basically is the story of James Mason’s short film “The London Nobody Knows” set to music.

At the other end of the scale, TV’s Bertie Wooster Ian Carmichael comes over as a slick operator/bounder on “Lemon Twist”. But even he is outgunned by the two smoothest cads that ever drew breath, Terry-Thomas and Leslie Phillips. They are presented side by side with Phillips’ louche “the Disc” battling out a commendable draw with Thomas’ own “bad egg for hire” effort “Send For Me” (Terry does get another shot with “Old Fashioned Boy” later on in the comp). But for me it’s worth the entry fee alone to just to hear set-closer Stanley Unwin tell(?) the story of Golidlocks to a hep Jazz backing, magical.

“And The Is Me” is excellent, nostalgic listening and the skills shown by these real stars (in a format that after all wasn’t even their field of expertise) are on another planet to the horrific “celebrities” of today. They really could entertain and it results in another sure-fie winner from Croydon Municipal. The uninitiated may well feel hornswoggled but for the devotees and those in the know it is surely a boon.