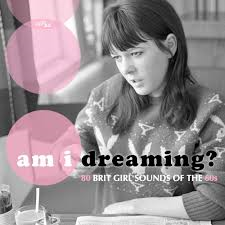 Following on from RPM’s the classic series of 60s female vocals Dream Babes is this 3CD of material new to the series, including five previously unreleased songs. Ian Canty hops in the Tardis to find the hidden sound of the 60s……

The Cherry Red off-shoot RPM Records has breezed a stylish path for a number of years, digging up many lost treasures along the way from the dim and distant past. Coming into existence 26 years ago in 1991, one of the first of their compilation series to establish itself was Dream Babes, running for a number of issues from 1994 to 2007. Focussing on mostly forgotten discs cut during the height of the 1960s, they featured a wide range of female vocalists from well-known to obscure. Each collection was put together with taste and knowledge by aficionados and enthusiasts which included among others Bob Stanley of St Etienne (who provides an essay in the accompanying booklet).

This new boxset Am I Dreaming? seeks to revive the spirit of those collections, but rather than just reissue previously comped gems, they’ve opted to instead put out this all-new 3CD compilation. Again the net is cast wide with established artists like Cilla Black, Sandie Shaw and Petula Clark being mixed in with jobbing actresses, future stars and journeywoman singers. Also you will hear very young talents, grasping their opportunity with both hands like it was both their first and last. Sometimes it was and for most others it seemed like it. So they poured every little piece of energy and emotion they had into their performance. Then perhaps they pretty much forgot about it after the record made little or no impact and went back to the workaday life they absconded from for that precious time, when just for a brief moment, they held the “Swinging Sixties” in the palm of their hands.

There’s a huge amount to get through with 80 tracks to consider, so let us look what is included when we get past the plush clamshell box and sleevenotes….

The discs broadly run from beginning near the start of the 60s running through to the end of the decade towards the end. Early on, the influence of the Ronettes’ huge successes with Phil Spector productions play a large part in supplying a template, along with the Brill Building’s hit factory. Soon the coming of Beat and Motown would also show their hands and their various tics and signatures would show up too, given a UK homespun makeover. Later Folk and Psychedelic Pop would also be blended in, but it is always all about a good song being well sung, with that hint of bittersweet passion and pain.

Disc one features mainly offerings from the early part of the decade with a fair whack of pizzicato strings and more grand orchestration jobs being employed, along with Merseybeat tinges starting to make a mark too (often together on the same record). The Vernon Girls’ Only You Can Do It has some prime girl group vigour and a freaky guitar break which pleased this listener and the early stirrings of Dusty as part of the Springfields add what sounds like a 12 string into their Come On Home, prefiguring Folk Rock a little. Joe Meek’s favoured female Glenda Collins takes us in almost a Garage direction with her hot Thou Shout Not Steal, a young Richie Blackmore providing the 6 string heroics.

It’s a bit of a shock hearing Our Cilla rock out for once on A Shot Of Rhythm Of Blues, an old favourite from the Merseybeat days. It’s pretty good, however her voice tends to split opinion right down the middle. The star of the Soho exploitation flick “Beat Girl” Gillian Halls is in a Folk Pop mode on Look At Them, a step away from her more Francophile recordings (she had great success on the other side of the channel as a singer). Elike Brooks would of course go onto greater success a decade later but her Something’s Got A Hold On Me is a standout – she’s in great voice on this Gospel/Blues track, with a band that really cuts loose. Barbara Ewing ends this disc with the great, couldn’t-give-a-hoot So Long Babe, which put the boy squarely in his place.

Though there’s much fun to be had on this initial disc, for me this compilation really hits top form on disc 2. There’s barely any filler on this platter and with a plethora of excellent offerings, it feels difficult to pick high points. But I’ll have a go anyway. Jan “Scratch My Back” Panter shows up with another goodie, My Two Arms Minus You + Tears. She provides a great vocal and the backing has a neat drum break and good sax and guitar. Kennington born Marilyn Powell pitches in with a snappy but weird bit of UK Soul entitled Please Go Away and Mind How You by Barry St John is a totally beautiful ballad, wonderfully sung and performed.

Adrienne Poster nee Posta was always a talented vocalist, but became better known as an actress in films Up The Junction, Here We Go Round The Mulberry Bush and later on, Carry On Behind. Her very danceable He Doesn’t Love Me was part of a fine run of singles on Decca, but soon she decided to concentrate on stage and screen full-time. A shame as it’s damn good. Truly Smith, another Decca recording artiste before moving onto MGM, proffers a high quality piece of sophisticated 60s Psych Pop in Taking Time Off. Both Norma Lee on Hurt and Maynell Wilson’s self-explanatory Motown Feeling seek to replicate US R&B and in doing so create a couple of real winners. Possibly the only jarring note on this portion of Am I Dreaming is Cilla’s slightly shrill take on Martha And The Vandellas (Love Is Like A) Heatwave. But otherwise it is pretty much full-on bliss throughout.

Moving onto disc 3 we have the wonderful Samantha Jones, who despite recording some fine waxings all the way through the decade, somehow managed to avoid the success afforded to lesser talent. She should be far better known. Her After All (I Live My Life) is dramatic and moving, with gritty guitar playing against the string embellishments, it’s spellbinding. Family favourite Petula Clark provides an archetypal example of her glittering MOR Pop on Love Is A Long Journey and the gentle Beat of Barbara Ruskin’s unreleased until now You Won’t See Me Leaving is a real heartbreaker. Tammy St John’s Concerning Love is like the Faces’ Stay With Me almost a decade early, jerky R&B with attitude and Mellow Candle’s Tea With The Sun verges on Psych/Indie Pop. Sandie Shaw brings things to a typically soulful and moving end with Your Time Is Going To Come – and maybe for the lesser known singers on this compilation, it has.

Am I Dreaming? has been put together with great care, taste and attention to detail. You’re going to have to have a love of female vocals and girl group sounds to get the best out of it, but if any of this floats one’s boat, jump in, the water is lovely! That aside, this collection does sounds like an alternative history of 60s UK Pop, as Stanley alludes to in his writing. One that was full of heart and soul, refreshingly a step away from the boy bands’ sometimes overdone bravado and posturing. Of course there is also an in-depth booklet telling each track’s story as fully as possible (some artists like Tammy St John even remain a mystery in the age of the internet, where everything is meant to be on-line somewhere). The sound of these hopefuls giving their all is a joy to behold. A beautiful dream.