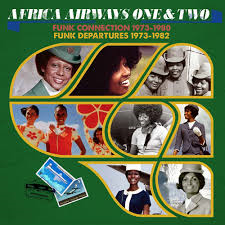 2CD collection which combines both volumes of a series which seeks to bring to prominence the best African Funk from the years 1973 to 1982. The original vinyl editions on Africa Seven released in 2015 were immensely popular and sold out quickly. With tracks coming from South Africa, Cameroon and Nigeria the continent has been scoured in search of the groove! Ian Canty finds the perfect meeting point between Isaac Hayes, Township Jive and squelchy 80s electronics…..

Perhaps, just maybe, there is a case that Funk could be the international language of music. From its beginnings through Soul and R ‘n’ B on the American “chiltlin’ circuit” in early years of the 1960s, to when George Clinton’s Parliament/Funkadelic mothership blasted off with Bootsy Collins, Eddie Hazel and Bernie Worrell on board, to seasoned sessioners in Denmark Street punching the clock between 9 to 5 and laying it down tight after a round of Woodbines, Laurie Johnson’s funktastic theme to the “Professionals”, to the sounds from Africa featured on this compilation, they are all have one thing in common, a fluency in the field of Funk (and that’s setting aside the presence of the Funk downbeat in Post Punk etc). Africa, the Motherland, supplied some top quality Funkers as we can see by copping an earful of this fine anthology.

It is only relatively recently, say in the last 10 to 15 years, that we in the UK have really wised up to the breadth and vision of the popular music coming from Africa. Which is a shame as there was more often than not something amazing going on (the WITCH boxset of a few years back, “We Intend To Create Havoc”, proved the invention going on in Zambia in the 70s for example). Funk African style took the traditional elements of the sound that developed through James Brown, the stoned Psych of Parliament and Sly and the Family Stone, plus adding the contemporaneous obsessions with synthesisers and vocoders, whilst all the while grafting this onto their own regional spin on things. In fact James Brown was clearly a huge influence to bands from all over Africa, with his whoops and hollers, as well as the tight, brassy backing of the JBs, evidentially a template for a lot of what is presented here.

All of the tracks on this compendium pass the test as far as authenticity and the dancefloor is concerned, getting the head nodding, feet on the move and the booty swinging. Some favour an almost totally Americanised approach, while others mixed the US influences with their own indigenous sounds and idiosyncrasies. By putting all this together, they came up with a sound that was wholly Funk and African, perfecting something that both delighted and defied easy description.

Choosing the more traditional route are Jo Tongo’s “Jangolo” where he successfully weaves an insistent hit-hat to a “Shaft” style beat and Pasteur Lappe’s “Na Real Sekele Fo Ya” which is what Ian Dury’s Blockheads would have sounded like if they hailed from Cameroon. Fellow countryman and the big name star of this comp, Manu Dibango, manages to capture the essence of the Philly Soul sound on his “Mimbo” and overlays this with some smooth Jazz Funk sax. As we see demonstrated throughout “Africa Airways”, a red-hot horn section was a pivotal element and sometimes a lone brass instrument fills in for vocals, like the “talking” saxophone on Sookie’s “Choco Date”.

Others paid heed to the huge impact of the Disco boom and fused that to the Funk rhythm. Tala A.M.’s “Black Gold” is as classy as uptown Funk comes and also as smooth as silk. M’Bamina (an Italian based multi-national sextet from Benin, Congo and Cameroon) seem to have a lot of common ground with the Gibson Brothers, their fast paced “Kilowi-Kilowi” has the same kind of forthright vocals married to digitised effects and a slap bass. Jake Sollo produces a real winner with “Father Time, Mother Nature”, joining a “travelling” synth sound and a Prog-ish guitar motif to some archetypal Disco electronic pops and in doing so produced a dancefloor killer.

Some though, mixed things up even more. For instance, Miriam Makeba’s brilliant but completely batty “love song to a Japanese car”, “Toyota Fantasy”, manages to weld a Reggae beat on top of a Talking Heads’ circa “Remain In Light” backing – it brings to mind for me Sly and Robbie’s Nassau recordings for Grace Jones too and works a treat. Eki Brilliant’s brief but beautiful “Africa, Africa” is another great wild card – powered by some great fuzz guitar, has a feel almost akin to PIL’s “Metal Box” days. Kemayo’s “Kag Am” prominently features a twanging Jews’ Harp which arrives unannounced halfway through and from then on dominates the Maceo and the Macks style horn arrangements. This is all somehow loaded onto a traditional pop music structure to woozy but fine effect.

This excellent offering from Cherry Red brings together two compilations that were clearly the work of people with sound ears and a true love for the sounds of Funky 70s Africa. Nicely housed with a booklet that gives you some info on the mostly quite obscure artists, this is one record that will get your feet tapping as well as opening your eyes to many an undiscovered jewel.