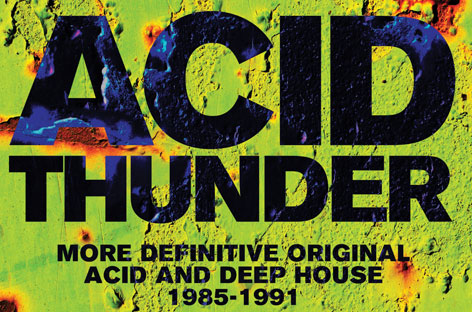 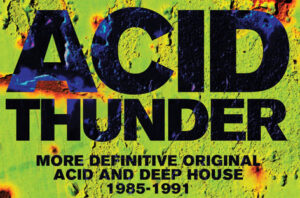 2013’s Acid Rain compilation compiled by House legend Terry Farley was an incredibly diverse and all encompassing release focusing on the myriad of sub-genres that exist under the House banner. With this 2014 follow up, Farley returns and the results are just as exciting.

Over its five discs, Acid Thunder once again eschews the obvious to dig deeper. Expertly remastered and still focusing on the halcyon days of ’85-91, Farley reintroduces us to tracks that have been out of print for many years with only a brief dip into the well known with E.S.P, D.J Rush, and Marshall Jefferson in particular representing the icons.

It is quite a revelation listening to these cuts as to how influential this period was and remains. Tracks like Nitro Deluxe’s “This Brutal House”  (which on here is in all its fourteen-plus minute glory) or Pleasure Pump’s “Fantasize Me” all still sound joyous, raw, and incendiary. The sense of times changing and social revolution is in this compilations DNA and it is easy to see the origins of modern artists such as Caribou, Four Tet, Daft Punk, and SBTRKT  whether purposely or subliminal.

Another point of interest is the discovery and re-release of over two dozen tracks from seminal Chicago label DJ International. Being in this most influential of cities right from the birth of what became known as House music and having the foresight to see what this music could, and WOULD, achieve makes DJ International (and its sub-label Underground) so important to the whole narrative of electronic music and its eventual global dominance. One of, if not the, turning points for the label was witnessing the soon-to-be legend DJ / Producer Frankie Knuckles.  Sadly, Frankie passed away this year and as a tribute Farley has dedicated an entire CD in this set to the Master. This disc is the true heart and soul of the collection, painting glorious pictures of a time gone but never to be forgotten.

Acid Thunder is an essential purchase for anyone who loves, who wants to investigate, or who thinks they know everything about this most gloriously joyous and subversive of musical genres. Like the young who love Green Day get told by older siblings / parents that “you should listen to *insert Punk originators here*”, anyone with an interest in Dance music should dive into this collection for a vital education. You will not for one second be disappointed.

All words by Simon Tucker. More from Simon can be found at his Author’s Archive.