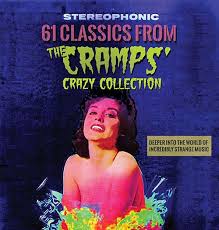 61 Classics From The Cramps’ Crazy Collection

The follow up to the previous Righteous plundering from Ivy and Lux’s legendary record stack, which contained one less classic….LTW’s Ian Canty looks at the Cramps’ seamy flip-side to the American Dream…..

They were an amazing band, the Cramps. In my book they were responsible for one of the best Rock n Roll albums of all time, though it is a bit naff perhaps to pick a compilation as an act’s best effort, there is no arguing that “Off The Bone” remains as exciting, powerful and fresh as when it first came rolling down the tracks like a runaway locomotive from hell. More than that it gets better with time, age adding gravitas, but not diminishing the jittery but cocksure groove. Other great records littered their career but no one did it in the same way and no one came close to doing it better.

Putting aside the music of the Cramps (there is not one note featured here that was played by them, but all of it was held dear by Lux and Ivy), they developed an aesthetic around themselves by constantly referencing music, films and other cultural phenomenon that they loved. There was no half measures as it became clear during interviews and on radio shows they presented, these things were not to be merely liked, they way more important than that and influenced the Cramps entire outlook on life. Also in doing this they thereby exposed this previously buried ephemera to a new and unwitting audience. In a way they were mapping out their own warped version of Americana, where the heroes of twisted rockabilly, lunatic disk jockeys and gory, sex-crazed B-movies counted far more than folk musicians, Levis or white picket fences. And it was this aesthetic that enriched thousands of lives all over the world, including mine.

Which brings us to this excellent compilation, the follow up to “60 Classics…” which also was put out by Righteous, home of many a killer various artists weirdo selection box. Bad taste and style always had more thrills than the “good” version and so it proves here. Not all the names featured are obscure as Carl “Blue Suede Shoes” Perkins and teen idol Fabian duke it out with the more unknown quantities like Betty McQuade and Young Jesse and the Flairs. Plus we get a double dose (oerr) of the king of dirty blues Andre Williams (“Pass The Biscuits Please” and “M M M M Andre Williams Is Moving” with the Five Dollars in tow on disc 2) in whose company time is always well spent. Homer Denison Jr’s manic death waxing “Chickie Run” is full of sirens and sound effects, ending with a very earnest voice-over that only adds to the kitsch appeal and following that lead is the tongue in cheek, sick joke ending of “Slide Her Under The Door” by Moses Longpiece (possibly not his real name). Danny Dell and the Trends’ “Froggy” is as manic a slice of teen-beat you could wish to cop an earful of and the hysterical screaming and crying on “Valerie” by Jackie and the Starlites quite unlike anything you would hear on a pop record in this century.

Moving on to the second disc there’s more blasts from the margins of 50s and 60s low culture, but it’s not all leather jacket wearing sleaze-oids moaning that their baby did them wrong, oh no. Actually after this one starts with the jungle rhythms of the Nite Cats plus a few hard-hitting and raucous hardcore guitar instrumentals (courtesy of Bob Taylor and Ronnie Ray’s Playboys), some pleasant tuneful pop and doo-wop seeps in, with a few quirks like barking backing vocals – until we reach the Clovers incredibly titled and incredibly foul mouthed “Rotten Cocksuckers Ball”. From then on it is a farrago of attitude fueled backwoods bop (for instance “Gang War” by Gene Maltais or Portuguese Joe’s “Teenage Riot”), straight out rockers (Ronnie Dawson’s squeaky “Action Packed”) and voodoo mayhem (the 5 Jones Boys “Mr Ghost Goes To Town”). Pride of place for me goes to the Imps brutal “Uh Oh”. This side of the set concludes in fitting fashion with possibly the archetypal demonstration of outsider American music, the Legendary Stardust Cowboy’s peerless “Paralyzed”.

All of this works on its own perfectly judged inner logic – the Cramps saw the links between mad, mawkish country, novelty discs, raw rock for greasers, dirty blues, skewed exotica and cash-ins that led them to their own inimitable style. Without the Cramps’ name this would still be a highly intriguing set of 50s and 60s buried treasures, but with it there builds a proper picture of the USA that the Cramps knew, loved and understood inside out: the beat up cars, the greaser-ridden diners, the sleazy go go bars, the drive ins, the jukebox playing on and on endlessly. Listening to this masterful compilation, even people who never set foot in the Cramps’ home country can see where they were coming from and imagine that lunatic New World in which they resided in full living colour.