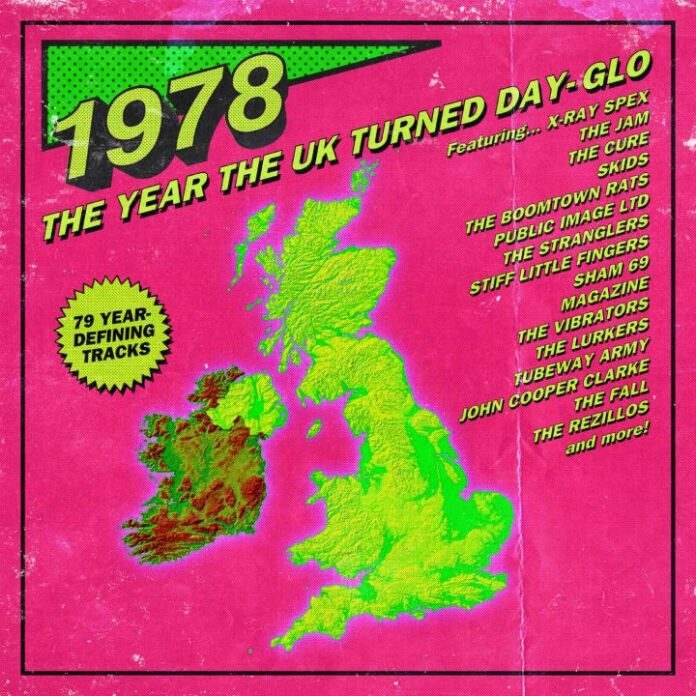 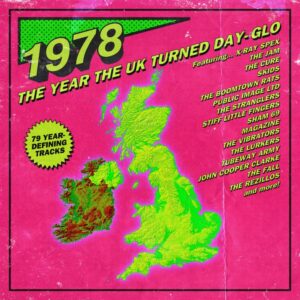 3CD compilation bringing together the various strands of UK punk and new wave music from the year 1978, with tracks by X Ray Spex, PIL and Sham 69 as well as many more….Ian Canty remembers his long gone youth and the music that sound-tracked it…

When the Sex Pistols burst asunder as their calamitous US tour drew to a close in late January 1978, it drew a line under punk for of lot of people back in the UK. In direct contrast though, a great many of bands that had used the Pistols as their jumping off point were only really beginning, their music shooting off in different directions far away from the original 1-2-3-4 punk format. Not that there was anything wrong with the latter – in fact 1978 produced many rousing examples of just that form, some of which are included on this new collection. Younger fans were still playing catch up and wanted a bit of the pogo-tastic sound of raw punk rock, which resulted in those bands invading the enemy territory of the Top Of The Pops studio in far greater numbers than in 1977. This meant punk was granted access to the average UK living room well before the television watershed (or as it was known to me back then, bedtime).

The difficulty with this kind of compilation is getting the balance right: too many tried and tested tracks and you’re in the field of the “101 New Wave Classics” cheapo sets that are available in supermarkets. Too many oddball excursions and you run the risk of not giving a reasonable picture of the year you are trying to depict. So the Only Ones’ Another Girl Another Planet appears – yes of course it is great, but the compilers could have dipped anywhere on that classic debut LP and struck gold. Having said that, Another Girl Another Planet really does root one firmly in 1978, so can be thus justified as a necessary pick in accurately depicting 1978 UK music. Also as the very wonderful Touch And Go by Magazine follows, one can’t really complain.

Going back to the very beginning of disc one, Sham’s Borstal Breakout kicks things off and is followed by 5 Minutes by the Stranglers and 999’s Emergency. An impressive opening salvo certainly, but so far so familiar. From then on though things broaden out. The Doll’s Don’t Tango On My Heart is a reminder what a fine pop band they were, full of 60s garage punch and energy, it is a crime they weren’t more successful. The genuine sits alongside the poseurs on this set, so you have The Boomtown Rats, at the height of their pseudo punkery with She’s So Modern, between the Outcasts’ You’re A Disease and Menace’s I’m Civilised, much more the real thing. That’s pretty much how it was in 1978, the phoney rubbing shoulders with the inspired, in my memory at least.

Wayne County’s Electric Chairs’ kit us out with a first-rate boogying glam punk tune in Bad In Bed and the Zones’ Stuck On You has enough chunky guitars to let you forget about Slik and is really catchy too. There are indications of new things gaining shape with Tubeway Army’s Oh! Didn’t I Say and the knowing camp of Japan’s Don’t Rain On My Parade synth-rock Funny Girl cover pointing to a new romantic future. Numan’s mob were still pretty punkoid at this stage with only his paranoid delivery really pointing to his electronic triumphs of the following year. Concrete Jungle by the Coventry Automatics aka the Specials AKA is a little slower and less abrasive than the album version on their 1979 debut and loses the slightly hippy line “I’m gonna get out and get stoned” – presumably it was deemed inappropriate in the sharp amphetamine lines of Two Tone?

There’s plenty other of vital sounds on this disc, like the Freshies’ garage weird-out Moonmidsummer, late punk classic Chloroform by the long-running but hardly ever recording Bleach Boys and the Automatics’ (nothing to do with the Specials this mob) timeless punky power popper When The Tanks Roll Over Poland Again. Jilted John (again maybe over-compiled but essential for portraying 1978 new wave), a reggae-tinged Rat Up A Drainpipe by the Members, Keele Uni students the Exits’ definitely un-PC Glandular Angela and ATV’s version of Uncle Frank Zappa’s Why Don’t You Do Me Right? end a disc full of interest and cracking tunes.

If I start writing about Poly Styrene there’s a chance I’ll never stop, but suffice to say she was a total inspiration for me and years ahead of her time. Disc two kicks off with The Day The World Turned Day-Glo and it positively soars. A textbook example of how visionary X Ray Spex were, leaving far behind the standard punk racket. Next comes TRB’s fiery Up Against The Wall and the creeping, claustrophobic drive of Central Detention Centre by Rabid recording artists Gyro. The Lurkers rarely took a wrong step in 1978 and certainly not on their immortal Ain’t Got A Clue and the Jolt sadly quit just before their 60s-influenced sound was coming into vogue via the mod revival, witnessed here on the very good I Can’t Wait single.

The VIPs were another band with modernist aspirations and here they provide the updated r&B of I Believe, a good pointer to their talents. A thorough collection of the VIPs’ works is overdue. Possibly the Rich Kids’ best single Ghosts Of Princes In Towers and John Cooper Clarke’s hysterical spoken word Kung Fu International follow and are great fun. Ultravox!’s mighty Slow Motion is a band near splitting but also at the peak of their considerable talents. They were well ahead of their time and it is also made clear here why Robin Simon was Magazine’s first pick to replace John McGeoch – his guitar work is every bit as inventive, gelling exquisitely with the pioneering synth rock/pop Foxx and co were mapping out.

Edinburgh’s the Questions sound a world away from their future recordings for the Respond label in sound and thought on Rock ‘n’ Roll Ain’t Dead. Cut for the Zoom imprint, this is more solid punk pop than anything else. I remember getting the Others’ Birmingham Reggae single some time in the 1980s and being a little underwhelmed. I’m happy to report that in 2020 it sounds nicely tight and upbeat. City Records labelmates the UK Subs feature with their pummelling I Live In A Car and Buzzcocks’ Steve Garvey moonlights on the Teardrops’ chanting post punk nugget Teenage Vice. Disc two ends with Albertos Y Lost Trios Paranoias’ minor hit single, the Quo pisstake but still quite punky Heads Down No Nonsense Mindless Boogie.

John Lydon’s opening statement post-Pistols Public Image and Alternative Ulster provide the preamble to the Detonators’ sparky pop punk of Light At Your Window. They shared some roots with SLF but were heading in the opposite direction, by the time Jake Burns’ boys struck out towards chart success they had split up. Penetration’s Life’s A Gamble somehow missed the charts, a great single with thrilling guitar and an endlessly appealing vulnerability in Pauline’s vocal. The radio news over scratchy jangle of Scritti Politti reminds one of post punk’s ascendency, with the headlong rush of the Fall’s It’s The New Thing and thrilling archness in the form of Alphaville by the Monochrome Set confirming times were a-changing.

Even so, more traditionally based acts like Wreckless Eric (one of his early best Take The Cash (K.A.S.H.) and the Tyla Gang (Flashing In The Subway – gulp!) still had the street-level attitude necessary to gain attention. The ringing power pop of the Records’ Starry Eyes is still an evocative winner too and the Bozos follow in their wake with the gentle beat pop of Weekend Girl. The Saints Are Coming from the Skids still demands attention despite all the plays down the years and few bands gave themselves a better send off than the Rezillos with the glam punk stomp of Destination Venus.

This comp takes us for a wander down Vaultage 78 alley on this disc with Nicky And The Dots, the Vitamins and the Parrots. The latter’s Spanish Stroll take off Larger Than Life is a goodie and the Dots’ punchy Wrong Street shows they had potential to appeal beyond the Brighton scene. The Passage offer us a glimpse into tomorrow with the guitar-less and percussive rush of Love Song and Eater’s parting shot What She Wants She Needs is a great piece of rock & roll fun. One thing that is a bit sad is that the set ends with the terrible Xmas cash-in White Christmas by Slush. Even the band didn’t like it and in common with its sales, it represents a damp squib to go out on.

1978 was a special year for me, a coming of age in music if you like. The Year The UK Turned Day-Glo makes a fair fist of portraying the musical climate in Britain during that year, very much one of change and experimentation, as well as obvious pop cash-ins on punk and new wave. The first disc in particular is superb, capturing the disparate, exciting feeling of a nation’s music in flux perfectly. The two other discs collect many gems without quite attaining the same level. An accompanying booklet profiles the contributing artists and add some illuminating insights, for instance I was unaware that the insane cackle at the start of Borstal Breakout came from a Judge Dread LP.

Steering far enough away from those “pick and mix” sets mentioned above, 1978 The Year The UK Turned Day-glo strikes a good balance between the familiar and the obscure. Though it meanders its way through the year in question, there’s a natural flow that means nothing that follows is too jarring, though you have to bear in mind 1978 UK pop was full of contrast. Twelve months full of exciting things are well profiled here.