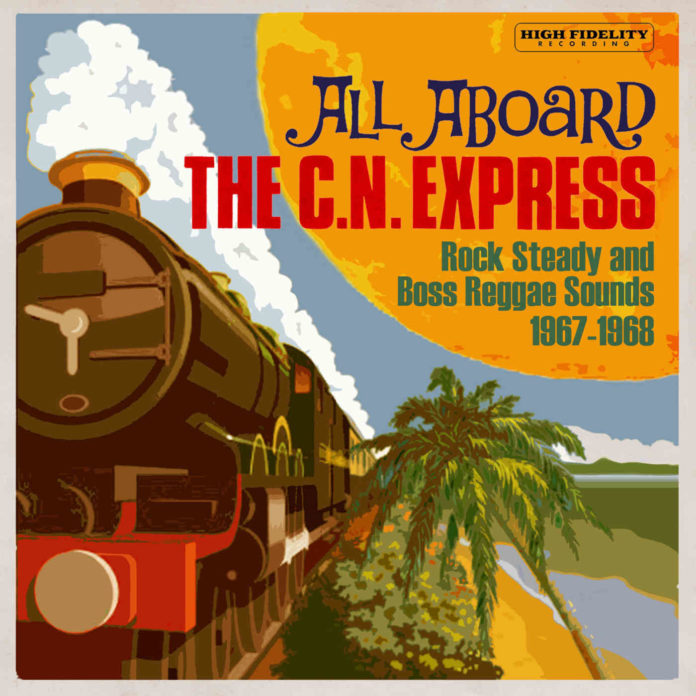 Various – All Aboard The C.N. Express 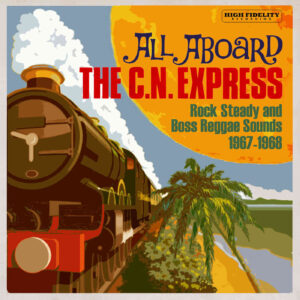 Despite having an evocative sleeve illustration that screams late sixties Jamaica, All Aboard The C.N. Express has been newly put together to compile Clancy Eccles’ productions just before he hit the jackpot in the skinhead/boss reggae era. It is easy here to see that his star was already ascending during the later stages of rocksteady and this set features some big names in Alton Ellis, Eric “Monty” Morris and his pal Lee Perry among others. Ellis’ production techniques at this stage showed an ear for off-beat rhythms and a willing to experiment with faster tempos, something that pushed the sound forward towards the birth of reggae. Indeed Clancy is credited with pioneering the term itself, deriving the sobriquet from the Kingston argot word streggae.

But back in rocksteady’s high-water mark year of 1967 Clancy returned to music full-time after a two year spell tailoring, which was his father’s trade. He made mainly stage outfits for bands and singers, but soon felt the pull of music again. As he started back he produced sessions far more than he recorded himself (only later recording more prolifically on his own again). One of the earliest successes behind the decks on his return was the very jolly opening track here, Say What You’re Saying, cut with Eric “Monty” Morris.

Lee Perry pops up with Hey Mama, garnished with a typically nutty talkover intro and also the pretty rocksteady of You Were Meant For Me, the song adequately masking his vocal limitations. Anything Alton Ellis turned his hand to usually has a stamp of quality written through it like Blackpool in a stick of rock and so it proves on the superb Feeling Inside, also known as True Loving. Mr Soul Of Jamaica really comes through and I dug the guitar sound on this too. Bye Bye Love, yes the song the Everly Brothers made famous, was also cut in the same session by Alton and though ok, it is for me very much a lesser entry in his canon. The booklet notes that Clancy didn’t produce these two tracks “hands-on” – it was apparently a policeman only identified as C. Burgh, who moonlighted as a sound system proprietor, who should be credited.

Theo Beckford had been a ska trailblazer with his hit East Snappin’, which provided the quantum leap from boogie blues way back in 1959. Here he recuts this landmark in a boss reggae mode and the adjustment to the more modern style goes down well. Monty Morris also scores with a top vocal on a rock-solid rhythm on Tears In Your Eyes and the steel drum-enhanced My Lonely Days.

As with many of these sets, there are jewels to be found from lesser-known artists here. The Coolers have a couple of corkers in the nicely rough Terrible Headache (great title that) and Birds Of The Air. They were a vocal duo that disappeared soon after this release, only to reactivate themselves in the 1970s and 1980s and their line up included one Dufton “Don” Taylor. The sparsely recorded Hemsley Morris provides a trio of great tracks in You Think I’m A Fool and the addictive skank of Stay Loose, but perhaps the pick is Bad Minded People. His occasionally nasal, sometime throaty vocals are really unique here and it’s a shame he only recorded a few sides afterwards. He clearly had something to offer, though showing talent ran in the family his son Hemsley Jr has had plenty of success solo and as part of the band the Innocent Crew.

Velma Jones’ strident vocal stylings may have had their genesis in the shrill early ska sound of Millie Small etc, but used the correct way they could still pay dividends, which is the case on the soulful I’ll Hold You Tight. She returns to duet with Clancy himself on Let Us Be Lovers. The Inspirations would later record Tighten Up For Lee Perry, but rocksteady was made for their cool vocal group talents, as best exemplified on swinging groove of Mother’s Advice.

There’s a skilful DJ toast on the title track which is credited to Clancy’s All Stars and No Good Girl shows the blossoming of reggae in full flight, with the Mellotones’ gospel vocals being accompanied by an organ groove the like of which featured on many a moonstomping instrumental. This band also recorded for Derrick Morgan and Lee Perry along the way.

From the basis Eccles set up in the years documented on All Aboard… he would go onto even greater success, most of which is neatly documented on the Freedom/Fire Corner and Foolish Fool/Herbsman Reggae sets (reviewed here and here respectively). After all this came a spell in politics which meant somewhat of a retreat from music, though he still had the occasional hit with socially conscious material and did return to have more limited success after concluding his political career.

All Aboard The C.N. Express captures the time when Clancy Eccles was just coming into his own as a producer. A year later he had his backing band the Dynamites in place and became one of the key music men during the original reggae era. You can hear the experiments that he was conducting to change the rhythm as things developed, but he never sacrificed the need for a good tune along the way.

Though perhaps not as consistently great as Freedom/Fire Corner and Foolish Fool/Herbsman Reggae, All Aboard… has more variety and many fine selections. Eccles could cut key rocksteady tracks that pointed to the near future and seldom produced anything less than enjoyable. A very pleasing compilation that does an excellent job rounding up Clancy’s output just before the reggae boom and another quality Doctor Bird set.