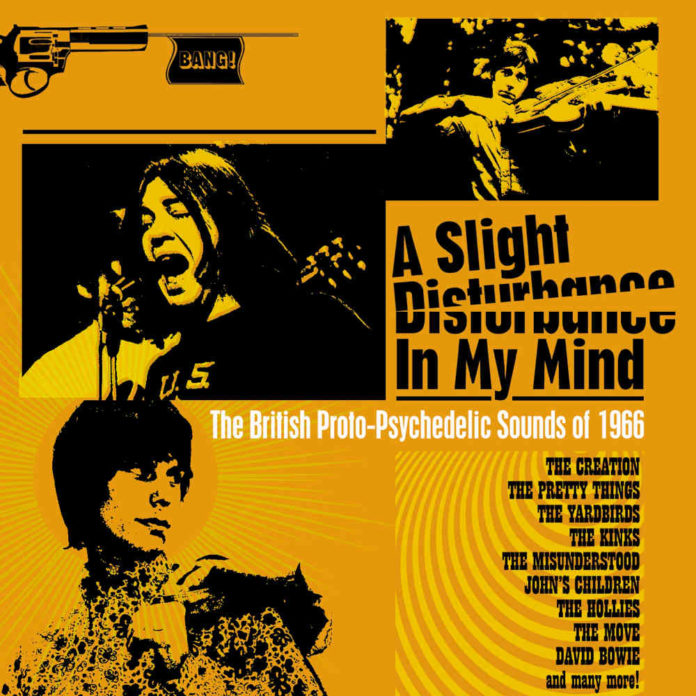 Various – A Slight Disturbance In My Mind 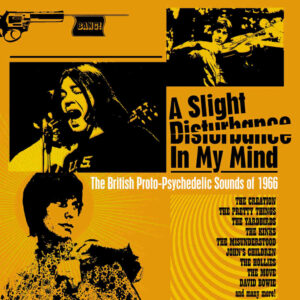 Subtitled “The British Proto-Psychedelic Sounds Of 1966”, this new boxset surveys a crucial year in UK pop with contributions from stars to be like David Bowie, Mark Bolan and Slade (as the N’Betweens) as well as more obscure artists……LTW’s Ian Canty leaps into an E-Type Jag in his Granny Takes A Trip finery to watch some auto-destructive pop at the Marquee, then onto a happening scene in Chelsea….

1966 was a watershed year in UK pop music. Things were changing. By then it must have seemed like the Beat boom had happened way back, but this format had successfully set the template for many bands playing all over the country. The Beatles sat at the very top of the heap, near omnipresent, with an influence that spread far and wide. They were changing the way people approached pop music with their every waxing. Arguably one of their biggest gifts though was just their musical set up, a two guitar/bass/drums line with a built-in songwriting resource (or in their case, three), but Revolver, their album of the year, represented another quantum leap. The closing track of the LP was something else entirely – Tomorrow Never Knows was deeply otherworldly and strange. Psychedelia had arrived.

In truth though the album’s predecessor Rubber Soul marked the Fabs’ first real dabble in the trippy (perhaps on Nowhere Man?) and many bands featured on A Slight Disturbance In My Mind had picked up on that by the dawn of 1966. The Beatles really were a long way away from their Merseybeat beginnings by then (The Score’s dazzling version of Please Please Me, featured on disc two of this set, provides a possible hint towards the how the Beatles’ past and present may have sounded in collision). Swinging London was in full flow and the music that would be retrospectively dubbed freakbeat was beginning to make its mark, taking the basis of Beat thru R&B and sending a rocket up its arse to propel into the stratosphere. But that isn’t the full story, this set doesn’t just have pilled-up mods slashing their guitars to feedback heaven/hell. Reasonably “straight” pop music, soul and folk pop artists also copped a hefty dose of the same attitude, eastern vibes and drones prevailing on mellower offerings too.

A Slight Disturbance In My Mind kicks things off in a near unbeatable fashion. The first four tracks are all classics of their kind, pretty well known to most 60s/Freakbeat fans I’ll grant you, but great nonetheless. If you asked me to select one song that I felt musically summed up 1966, Making Time by the Creation would more likely than not be my pick. A minor chart hit, but a major record, with Eddie Phillips’ violin bow action pre-empting the likes of Jimmy Page. But more than that the derisive snarl in the vocals and lyrical bite (“makes you sick”) is extraordinary, something that would find expression again 10 years later in punk.

Talking of J. Page esquire, he was a member of the Yardbirds of course, but the next track Shape Of Things predates his involvement (Stroll On, their “Blow Up” soundtrack update of Johnny Burnette’s The Train Kept A-Rollin’, does have a contribution from Jimmy and features on disc three) and was one of the very first singles deemed “psychedelic”. Jeff Beck handles the thrashing guitar on this with aplomb. Next come the Action with their second single, a killer cover of the Marvellettes’ I’ll Keep Holding On. Mod pop that had real soul and some great drive. Les Fleur de Lys’ Mud In Your Eye shows the kind of guitar-wrangling talent that would lead to the excellent Hold On single with Sharon Tandy in a couple of years time, but this beaut deserves attention of its own. There is a great vocal performance on this and the rhythmic build of the song and music delights.

David Bowie and Marc Bolan are both caught early on in their careers, with Bowie’s soul/psych of I Dig Everything being just my favourite over Marc’s Hippy Gumbo demo. Twinning the brilliant Pretty Things with a Ray Davies song was always going to be a winner and so it proves on A House In the Country and Slade, in their pre-glam guise as the N’Betweens, have a groovy take of Otis Redding’s Security. This is a fuller version than the one briefly issued at the time, complete with mind-warping ending. A real delight out of nowhere is the strange but great Am I The Red One by Mick Softley with the Summer Suns. Sadly Mick went into rapid mental decline which curtailed his singing career, a great shame as this track clearly shows abundant promise.

Moving on to the second disc of this set, it begins with a demo take of the Smoke’s My Friend Jack. The single version was a minor UK hit that was banned by the BBC for the drug-referencing lyric. When the band were called the Shots they were managed by a certain pair of twins from East London, but changed their name to the Smoke and absconded, being perhaps lucky the Krays were busy with other issues at the time. The Creation are back with prime art pop nugget Painter Man, this 2017 stereo mix accentuates the crunchy guitar break nicely. Why Don’t You Smile Now by Billy Childish favourites the Downliners Sect was one of the earliest Lou Reed/John Cale covers, dating from the pre-VU band the Primitives and they equip it with their usual musical might and louche taste.

This disc is another trove of delights, with only the occasional ho hum moment. Paint It Black by the Tomcats doesn’t really add a lot to the Stones’ original and the Wheels’ version of Paul Revere And The Raiders’ Kicks isn’t bad, but not their best (their Road Block for instance is mighty fine). Canadian transplants the 5 A.M. Event do rather better on Revere’s Hungry and the involvement of the Searchers’ Chris Curtis introduces the theme of longer standing outfits trying to adapt to the new conditions. The Animals’ moody Outcast is a treat and We’re Broken by the Moody Blues a true example of the early days, being great, euphoric pop. Beat-era hitmakers the Mindbenders, having dispensed with Wayne Fontana, give us the fast twang of The Morning After and the Tremeloes’ semi-acoustic pounder What A State I’m In belies their trad roots in a fabulous way.

In a more esoteric direction folkie Al Stewart enrols the ubiquitous Jimmy Page to enhance Turn To Earth and jazz/r&b legends the Graham Bond Organisation add a strange rhythmic pulse and parping sax drive to their entrancing You’ve Gotta Leave Me Babe. The Favourite Sons’ original Walkin’ Walkin’ Walkin’ is a real brutal freakbeat belter and daft recipe tune Molly Anderson’s Cookery Book is a suitably rum side from the Artwoods. A rampant flute gives Deep Feeling’s The Ruin a kind of proto-prog soul feel, in any case it’s a fine tune and if the Cortinas (nothing to do with the 1970s Bristol punk band) had members that went onto cabaret pop band Guys And Dolls and New Zealand new wavers Split Enz, that only goes some of the way to explaining the weirdness of their three-part offering Sagittarius.

We reach the final disc which is headed up by The Love I’d Thought I Found (aka Smashed, Blocked) by John’s Children. It’s an odd combination of tripped out sections and a soul/doo wop song. Later on we also have the more routine but bright mod pop of Hey, You Lolita, from their previous incarnation as the Silence. Wimple Winch’s Save My Soul has long since manoeuvred its way out of obscurity into the hearts of Rubble afficiandos, but can the same be said of Merseybeat no-hopers the Kirkbys’ distorted jangle pop wonder It’s A Crime or Outrage’s unreleased jiving talking A Different Kind Of Love? Maybe they will after this set.

The Bee Gees confirm their position as crown princes of early paisley pop with the effortlessly cool I Am The World adding to disc one’s pearl Play Down. A million miles away from Saturday Night Fever and stunningly beautiful. Their rivals the Zombies and the Hollies acquit themselves excellently with the upbeat drive of Indication and a shimmering Clown respectively. Before Fire set him in the world’s thoughts as a bloke with his hat aflame, Arthur Brown was a superb soul shouter, something that is proved by his Don’t Tell Me, a great dance tune. The Flies’ demo version of I’m Not Your Stepping Stone burns with menace, one wonders if the Pistols heard this take. That Tomorrow Never Knows makes an appearance is no surprise, in a quick-fire but expert cover by the Mirage and A Slight Disturbance In My Mind ends with the Move’s suitably powerful but tuneful Disturbance.

This set is packed with great stuff – not all is what you might term rare, but if you look on it from the point of view of a newcomer to the music of 1966/freakbeat you would struggle to find a better starting point. For anyone, even 60s anoraks like myself, it makes for great listening and gives one an authentic view of the times by taking in the well-known, obscure and also not very hip names too. Later in the 1960s pop’s borrowing from the “out there” got a little more cynical and cloying, but in 1966 things were looser and a real spirit of adventure prevailed. A Slight Disurbance In My Mind proves an excellent time capsule back to a time when pop groups when struck noisily out into the unknown, with often astounding results. To be honest with a few exceptions everything here is worth your time and interest – 1966 bounces back here full of colourful life – tune in, feedback and wipe out!