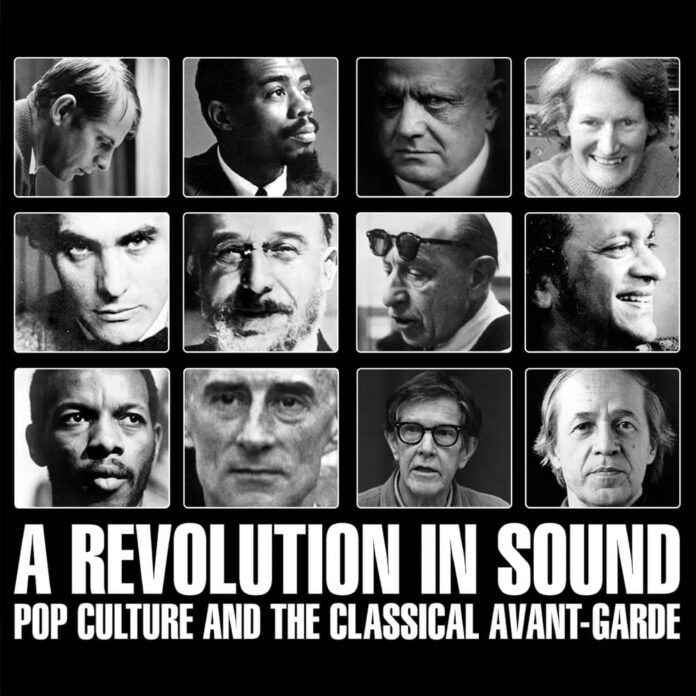 Various – A Revolution In Sound 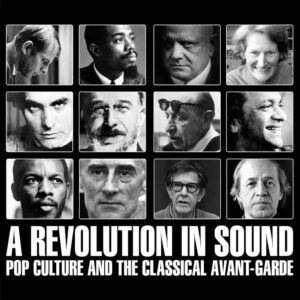 Subtitled “Pop Culture And The Classical Avant-Garde”, this boxset includes diverse contributions to reflect the influence of classical, jazz and the avant-garde on popular music and culture. Selections from Ornette Coleman, Claude Debussy, Pierre Henry and Ravi Shankar aim to show the gamut of styles sampled by the latter half of the 20th century’s pop musicians. Ian Canty takes a look at the outré roots of the late 1960s’ sonic youths…

The psychedelic era arguably opened up a sea of opportunities for pop music artists like never before. Taking a similar format to él’s recent West Meets East compilation set (reviewed here), A Revolution In Sound seeks to position the more experimental jazz, classical and musique concrète of the time in a pop context. Though blues, jazz and country had been the building blocks that formed the template for rock & roll and thereby pop music itself, by the late 1960s everything from music’s past suddenly became fair game for the musicians that were looking towards more offbeat sounds, in order to spice up their trippy compositions.

Ornette Coleman’s The Circle With A Hole In The Middle (perhaps a Polo mint?) is as good a place as any to start A Revolution In Sound. His sax squawking and riffing over a lively rhythm section kind of mirrors the psychedelic generation’s need to freak out in music, often over their original mod r&b roots. The following Bela Bartok contribution, No. III Adagio, From Music For Strings, Percussion And Celeste conducted by Herbert Von Karajan, is a tad more difficult to place. Some may be familiar with it through the film The Shining, but the dreamlike wonder that is teased out gently over the course of its duration perhaps could have inspired some “out there” flights of fancy.

Of course we should remember that “pop culture” isn’t just confined to pop music. For instance Luciano Berio’s flute piece Sequenza 1 brings to mind incidental television music, possibly for a wordless cartoon about a curious dormouse, but I digress. Next comes Gruppen For Three Orchestras, played by the Cologne Radio Symphony Orchestra and composed by Karlheinz Stockhausen. This is a long piece which I found very entertaining, playful if slightly unnerving listening (the bit of fuzz at nearly 10 minutes in caught me out!) and surprisingly accessible too.

John Coltrane’s Aisha and Eric Dolphy’s downbeat gem Glad To Be Unhappy bring us back to jazz’s outer limits. The former of those two is graced by an elegantly smooth piano figure from McCoy Tyner. The long, meditative raga from Ravi Shankar and Ali Akbar Khan entitled Raga Bliaskhani Todi reinforces the essential eastern element that performed a key role in psych’s original thrust. Going back even further in time Sergio Fiorentino plays Franz Listz’s piano solo Nuages Gris and John Dowland’s brief King Of Denmark’s Galliard, brought to life on the lute by Julian Bream, date from way back in the Elizabethan era. Bream’s other performances of Dowland compositions provide the end-pieces to discs 2 and 3 of this set.

Disc two here gets underway with the way ahead of its time primitive electronica of Bruno Maderna’s Notturno For Tape, which certainly shares something with the BBC Radiophonic Workshop. That group’s members also crop up in this part of the set with the incredible Private Dreams And Public Nightmares. The Workshop’s Daphne Oram, Desmond Briscoe and Norman Bain combine to produce a masterwork of found sound, echo, backwards tapes and odd studio effects, backing a long spoken word piece that conjures up a vivid dream scenario. With a lengthy introduction that adds a touch more period charm, this is pretty damn far out for 1957 and a reminder that even prior to the BBC RW being properly instituted, their members to be were already producing outstanding experimental works before the 1960s even kicked off.

The suite of works from Jean Sibelius are slight, symphonic pieces which I found fun to listen to without truly doing much that one would have considered influential to 60s pop. But Benjamin Britten’s Four Sea Interludes, which follow, are very atmospheric and deep sounds. Frank Zappa was apparently a big fan of Edgard Varese and his three offerings include some fine interplay between the brass used.

Ravel’s Menuet sur le nom de Haydn begins disc three of A Revolution In Sound and is performed with a beautiful, lyrical touch by pianist Marcelle Meyer. Four orchestral pieces with the overall title of Le Tombeau de Couperin from the same composer follow and each is lightly performed but truly moving. My introduction to Claude Debussy, who provides the next three items, was through Ken Russell’s remarkable television film starring Oliver Reed in one of his best roles. A very entertaining film, if perhaps not that historically accurate, it did however whet my appetite for Sonata for Flue, Viola and Harp which is featured here. Split into three movements and recorded at the Walthamstow Assembly Hall in 1961 by The Melos Ensemble, they are delicately and delightfully played here.

Next we have the Igor Stravinsky ballet Agon (Contest). This is divided into short, dramatic shards (apart from the longer Pas-de-deux – Coda), with tense strings, portentous drum, piano flutters and melancholic brass. You can see how it would fit with the movement on stage, but some of the pieces work well without visual accompaniment, like the gritty violin “cat and a mouse” with a flute that is Coda and the strange twists and turns of Second pas-de-trois.

Apart from Forlorn Hope Fancy, another John Dowland/Julian Bream lute exploration that ends this disc, we’re basically in wall to wall classical territory with definite dabbles towards the eerie. I enjoyed it, but I did feel this missed a little in terms of the wild variety that is contained elsewhere On A Revolution In Sound.

The final disc here begins with Charles Ivers’ piano and flute meditation Piano Sonata No. 2 “Concord Mass 1840-1860” IV Thoreau. John Cage has over the years become more renown for his silent piece 4’33 than anything else, but it becomes clear here that he loved the pure thrill of using noise on record. His Amores for Prepared Piano and Percussion is split into four sections, with the rumble and rustle of Trio (Nine Toms Toms, Pod Rattle) being an outstanding musique concrète/classical crossover.

But for me the undoubted star of this section of A Revolution In Sound is Pierre Henry, who gives us the massive Le Volle D’Orphee I (The Veil Of Orpheus). This is a wonderful 27 minute trip into the unknown, with drone sounds, treated voices, traditional instrumentation, electronic noise and the use of silence as an instrument all combining to startlingly strange but highly imaginative effect. This was really the sound of the world of music opening up to new ideas and the running time flies by, filled with constant innovation. The otherworldly noises and concise playing help to truly reveal the sound of the future.

Oliver Messian’s organ piece Le Banquet Celeste, which was recorded in 1956 is full of icy menace, like an outtake from Twin Peaks. So far ahead of the game. Finally the Bill Evans Trio riff away subtly and with much brightness on their effort Person I Knew.

A Revolution In Sound is a satisfying delve into pre-rock & roll oddness, drawing together a variety of out there sounds from across a wide musical spectrum. There is that sticky patch on disc three where I felt the concept got a little diluted, but there is nothing wrong with it musically though. Other than that this is a well constructed, interesting and invigorating set, put together with él’s consummate flair. If you desire a break from the everyday sounds of the 21st century, this will do the job for you nicely.