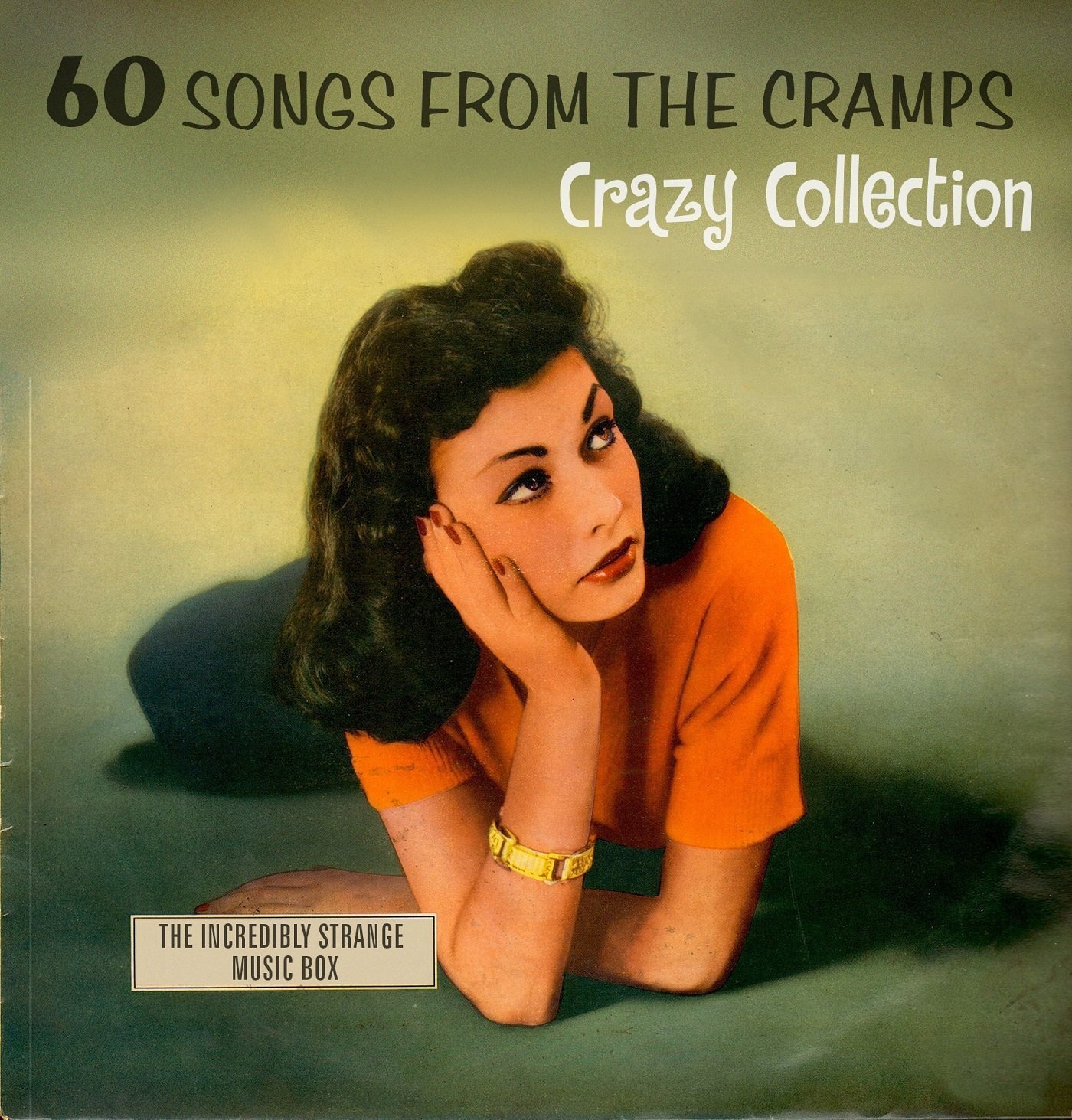 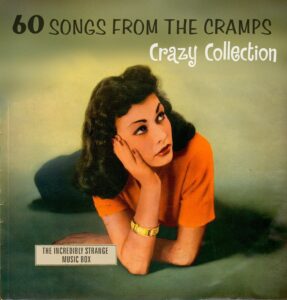 A frankly stunning collection of uber-cool bands, and artists, the majority of which you will never have heard of; the collection being assembled around the central theme that the tracks were either played by The Cramps frontman and vinyl junkie Lux Interior during his Purple Knif radio show or formed part of his and Poison Ivy’s mountainous personal collection of rock ‘n’ roll, doo wop, garage, trash and all associated genres…

The record collection of Lux and Ivy has, certainly since his death in April 2009 taken on almost mythical status, and has spawned its own industry of compilation albums, not to mention reissues of the classic Born Bad series; ’60 Songs From The Cramps Crazy Collection’ is the third linked release from Righteous Records – check out the ‘Spirit Of The Cramps’ and the ‘Smell Of The Cramps’ which were also compiled as is this one by MOJO contributor Dave Henderson – obsessives amongst you should also seek out the ‘Beats From Badsville’ series (Stag-O-Lee Records), which when I last looked had reached Vol #3 – once again Dave Henderson being the curator.

Spread across 2 CD’s this sprawling collection gathers together some of the most unhinged performances ever scratched into wax – from cool instrumentals and rampant rockabilly weirdness through to female rock n rollers, via devotees of voodoo and devil worship and not forgetting those responsible for the dance trends now only seen on YouTube; how else would you explain The Collins Kids ‘Whistle Bait’ – released in 1958 via Columbia Records; this is a tale to behold – just how did 14yr old Larry Collins get to yelp “Whistle Bait” at any shapely lady strolling the sidewalk, clearly this youngster was consuming excessive quantities of root beer!! “I see that gal a-commin’ down the street/All draped up in a dress so pink/She has a-eyes so blue and a-lips so cold” – down boy!! Equally strange being that his 16yr old sister Lorrie was featured on the flip lamenting her boyfriend in ‘Rock Boppin Baby’…its seems Mr & Mrs Collins were so sure their progeny were set for fame they sold the family ranch, moved to Hollywood and the kids began cutting records at which point Lorrie began dating Ricky Nelson, before at the ripe old age of 17 married Johnny Cash’ then manager – what happened to Ma & Pa has been lost in time… 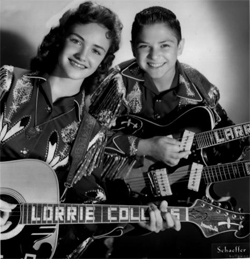 Forget grits & eggs, ‘Ham ‘N’ Eggs’ is where it’s at for Skip Manning on this guitar driven rocker, Skip was born as Phil Flowers in Longwood, North Carolina, back in 1934, he was eventually to become known as ‘The Black Elvis’ and recorded alongside Nat King Cole, Bill Hayley…Bo Diddley needs no introduction ‘Congo’ with its uncompromising, rockin’ beat is no exception; lifted from the ‘Bo Diddley Is A Lover’ album…The Aladdin’s ‘Munch’ is hard to explain, an ode to mastication, with a weird bouncing sound – this is genius of these early rock ‘n’ roll recordings, the technology to record anything you fancied had just arrived at an affordable price, rock ‘n’ roll had no rules, no sales genres so lunatics from the North to the South, from East to West booked studio time and hammered out their insane ideas, check out Joe Dodo’ ‘Groovy’ sax driven bass roller with the single lyric ‘Groovy’ repeated in a salacious tone now only heard via premium rate phone lines, though this barely prepares you for Jim Backus & Friend ‘Delicious’ which sounds like Elma Fudd wooing a nicotine soaked cougar in a down at heel gin palace – this has got to be heard to be believed! Should Clyde Beavers be alive to propose to a label that they release ‘I’M Drunk Again’ I suggest he would be violently ejected from the building, thankfully back in 1960 Decca thought it was a god idea, equally strange is that someone thought it a good idea for Rusty Draper to release the ‘Tongue Tied Over You’ which has the one time stand in for sports announcer Ronald Reagan struggle to express his desires for a no doubt voluptuous brunette, think Norman Collier over a lounge beat…The Invaders ‘Shock Treatment’ was released back in 1964 via 20th Century Fox Records, clearly a space race cash in complete with ‘outta this world’ effects, and why would anyone record a bosa-nova cover of ‘Tequila’…hell I’m glad the Three Suns did despite the cheap Bontempi style keyboards, whilst Kenyon Hopkins really was asking someone to ‘Let Me Out’ this could only have been recorded by a person restrained by a Court Order, the levels are all over the show, Kenyon delivers a voice rattling with vibrato, well – what he thinks is such over a four note guitar refrain; Hopkins attended Oberlin College and Temple University, studying composition and music theory and went onto compose numerous jazz-inflected film scores prior to his death in 1983; The Bikinis ‘Crazy Vibrations’ can only really be described as unique slice of exotica, an instrumental titty-shaker first released by RCA in 1960 that deserves to be heard once again, same goes for Jerry Neal ‘I Hates Rabbits’ that Dot Records sought fit to unleash un an unsuspecting, and no doubt still recovering public in 1958 – Jerry Neal was thought to be Jerry Capehart, and his ‘Rabbits’ record was a blatant attempt to cash in on the novelty record trend of 1958, the accompanying Bugs Bunny type voice belongs to engineer, Stan Ross – listening to this clearly convinced Lux that to sing with a Styrofoam cup in your mouth was a sound move…the real sound move being by Jerry Capeheart, who was thought to actually be a certain Eddie Cochran!! 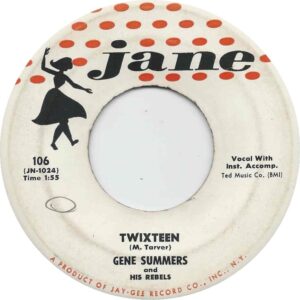 Gene Summers belts out a paean to his baby, particularly when she dons her tight “Straight Skirt’ in this rockabilly, he was teamed with The Rebels for ‘Twixteen’ a rockabilly stomper with lyrics that would get you a room with a certain Mr Glitter these days, another occupant might be Art Wood whose ‘Hey Jibb’ extols the virtues of “ruby lips”…Charlie Feathers could conceivably be the greatest influence upon Lux, Feathers distinct vocal delivery clearly inspiring Lux to some of his finest moments ‘Wild Wild party’ perfectly showcases Feathers theatrical, hiccup-styled vocal – quite what the record buyers of 1961 made of Charlie’s description of the party is yet to be disclosed; Lux would have almost wet his pants when he first heard The Forbidden Five’ ‘R.F.D Rangoon’… certifiably twisted jungle flavoured exotica from the Forbidden Five complete with Theremin, elephants and a banjo…and no concept of arrangement, clearly a case of more is better, it’s difficult to comprehend taking this completed recording to any label owner and ask for this to be released as a stand-alone release, but that’s just what Capitol Records did in 1959 – if you happen to have an original copy, hang on to it…now regularly fetching in excess of £40 when this gem comes to the market place – a similar price is expected for the tittyshaker ‘Garlic Bread’ from Garry & Larry though listening to it I’m not convinced that was garlic these two were consuming – snare heavy drum intro to the damaged Hammond to that completely insane, screaming honking sax…whilst The Blenders ‘Don’t Fuck Around With Love’ was one of the earliest records ever to use that particular expletive, initially titled ‘Don’t Play Around With Love’ and released on Jay-Dee Records in 1953 – originally formed as a sort of off-shoot of The Ravens immediately after The Second World War when tenor vocal groups were making their mark on the recently returning US servicemen…

The Voxpoppers ‘The Last Drag’ is like a modern mis-press; initially being a straight lift of ‘Bad To The Bone’ before warping into a flaming guitar led, then revisiting ‘Bad To The Bone’ whilst detailing the death of a hot-rod…keeping with the ‘borrowing’ theme The Ventures ‘Ginchy’ utilises the riff from The Munster’s whilst keeping the pedal hard to the floor. Does anyone know if Ike Turner ever visited Cuba…perhaps he just enjoyed the thigh rolled cigars for something certainly injected the island vibe into this high pitched heavy echo guitar novelty.
60 tracks of audio madness, none of these recordings would be made these days – the artists, drunks and lunatics who created the tracks had and then took the opportunity to capture their ideas free from the burden of pre-production meetings, sales expectation graphs and are all the better for it. If it takes the tie-in of The Cramps legacy to get these records out to a wider audience then lets keep them coming.