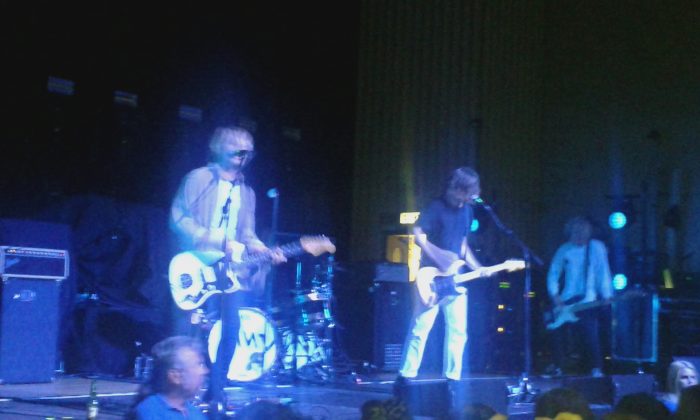 Parking up outside the venue, there are already a sizeable horde of people streaming into Swansea’s Brangwyn Hall. Named after the artist Frank Brangwyn, the hall is most famous for housing the artists’s painted panels that were originally earmarked for the House of Lords. It is a concert venue, but is usually used for more ceremonial and grand ‘award’ giving events.

Tonight however, the great unwashed (yet beautiful) of South Wales are descending on it for a headline show from You Me at Six. Now, I have seen You Me at Six before so, to be honest, I’m here tonight for support act VANT. VANT are a four piece rock band formed in London by guitarist, main songwriter and vocalist Mattie Vant. Bolstered by Henry Eastham (guitar), David Green on drums and Billy Morris on bass, VANT have been on a rollercoaster of a year that has seen them play pretty much every UK festival on the circuit (including Glastonbury, Reading/Leeds and YNOT) and play listed on Radio 1. However, being still young, new and unknown, going on tour with the mighty You Me at Six must be a blast and tonight VANT have the opportunity to win over this crowd. Lets see.

They take to the stage with very generous applause and once first track ‘The Answer’ kicks in, heads are starting to bob and the ever increasing crowd start to move to the noise that VANT make. And it is a very welcome noise. With a throbbing bassline that almost shakes the hall’s foundations, this is a chugging freight train of a song.

Quickly followed by brilliantly titled ‘Welcome to the wonderful world of Berners Lee’ which is another upbeat and rocky number that starts to get some fists in the air. Again, it’s a bass driven throbber that the crowd can’t stop moving to. They introduce a new song called ‘Peace and Love’ that has a really big sound, a nice guitar line running through and is surprising noisy, yet melodic. I think this is one that finally has the audience (and this writer) in the palm of VANT’s hands.

Their fourth number is a slower affair and really shows off the bands harmonies and the vocals by lead Mattie. It’s atmospheric and almost borders on the Feeder esque? Nice. Single ‘Parasite’ comes in at 100 mph and the crowd love it. With its ‘Johnny Be Goode’ appropriation, this really clever stomper gets the now very sizeable crowd moving and head banging. It’s loud and fast.

The next song the lead singer introduces with some words on the environment and how we should love each other, etc. Its sentiments aren’t lost on the crowd. ‘Time and Money’ is another rocker and has the great refrain “there’s a whole in the ozone Dear Liza, Dear Liza”. The next two numbers ‘Karma Seeker’ and ‘Parking Lot’ remind one of Bush maybe? They both are bassy fist punchers and have stop/start drumming that adds a really nice dynamism to the rockiness.  There is a blistering solo and the lead singer falls to the floor. VANT are really starting to remind one of an early The 1975 maybe?

The last couple of tracks are again stop/start quiet/loud affairs that show off their Nirvana and Pixies influences. The penultimate number ”Fly-By-Alien’ has a blisteringly really great riff and without warning a moshpit appears.

And with ‘Do you know me?’ ringing this crowds ears, they are gone with Swansea definitely wanting more. VANT seem to be more than just pop rock. Its more than pop punk. They have the guitar hooks. The socially conscious lyrics. The pained vocals and the great harmonies. They also have the ability to hold the audience’s attention and totally include them in the bands experience. VANT really are a nice band to watch and listen to live so look out for them. It’s bloody good stuff.

See press for further You Me at Six dates.