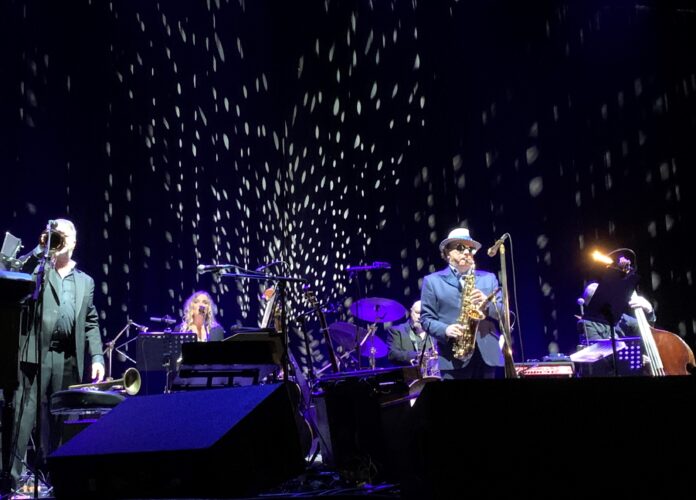 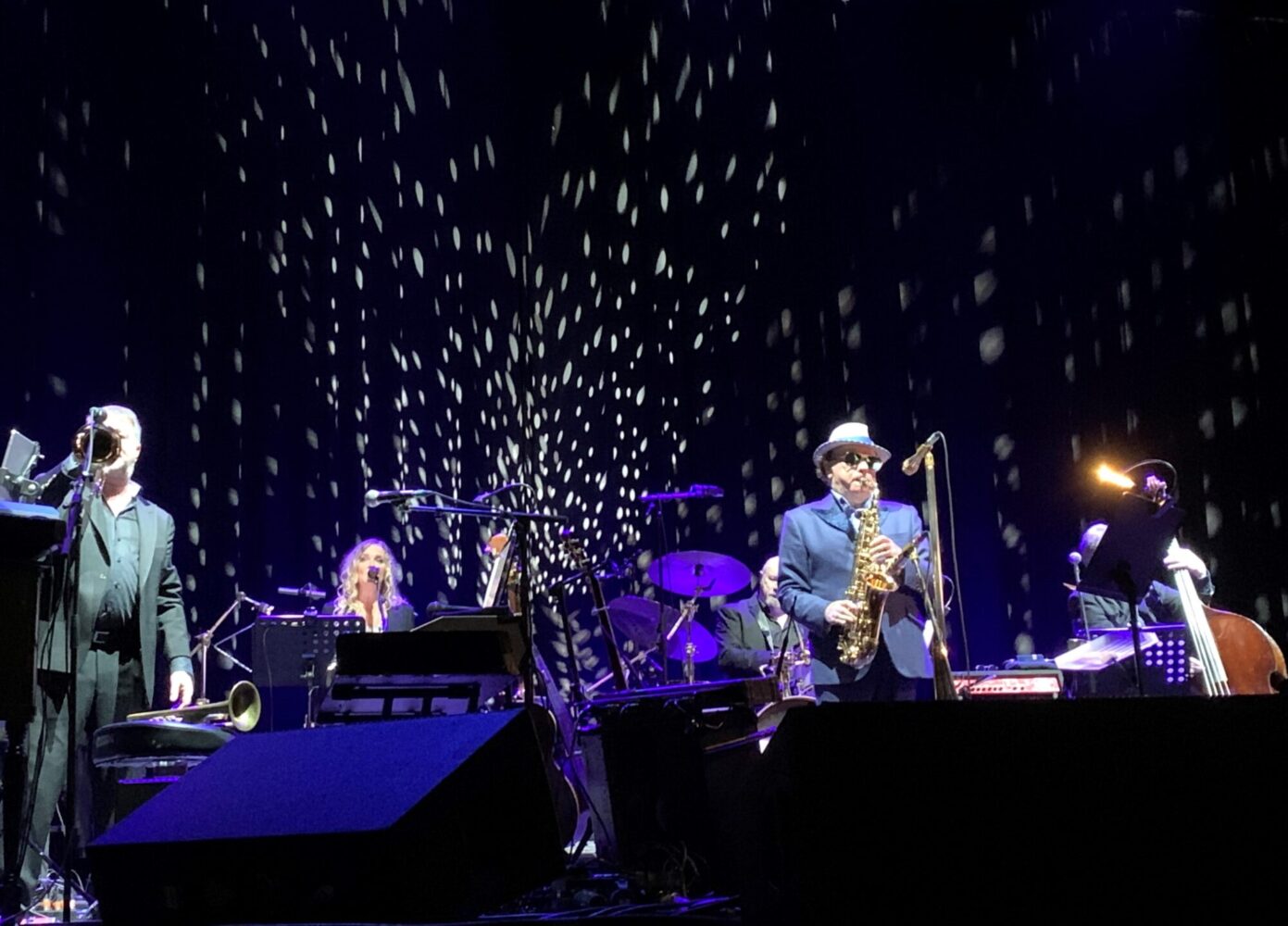 Van Morrison returns from lockdown into the live arena with a stop off in Manchester amid his summer festival tour. Ian Corbridge cannot hide his excitement at witnessing this masterclass in the arrangement and performance of an outstanding collection of songs.

As seasoned performers go, there are few to compare with Sir Van Morrison OBE. Now at 75 years young and with a recording career that dates back some 59 years, this Grammy Award-winning songwriter, multi-instrumentalist, record producer and fearsome band-leader has been around the block too many times to mention. His first top-ten hit in 1964 with Them was the garage rock classic Gloria, which was actually the b-side to Baby Please Don’t Go, and so many classic songs have followed in the many years, indeed decades, that have followed.

Over such a long period of time, Van’s music has undoubtedly proved to have a timeless quality with a distinctive blend of blues, jazz, folk, rock, rhythm and blues, country, gospel and traditional Irish music which are his roots. And all of this with his unique and distinctive vocal delivery. Furthermore, he has continued to redefine songs, usually in a good way, in the same way that Dylan has always done over the years. So one tour may never sound the same as another, which always keeps his music fresh and interesting.

Van of course is not a man without controversy and his outspoken views on numerous topics, not least of which more recently has been centred around the pandemic, have divided fans and critics alike. But hey, this is my first visit to the Manchester Apollo since November 2019, ironically when I saw the magnificent jazz collective Snarky Puppy, and from the conversations I am hearing around me in the seats down the front, it is clearly the first concert many of those assembled have attended since lockdown first began. So tonight, this is all about the music which we have all come to relish and enjoy.

The Apollo is far from full, but I sense that this is less about Van’s controversial views on life, and more about peoples reticence at returning to the live arena after such a long absence, which I totally get with an element of risk still hanging in the air. But for those that have turned up, there is a palpable sense of excitement, both for Van Morrison taking the stage and indeed for live music actually returning.

I also hear around me reference to Van’s lack of interaction with audiences and his propensity to come across as grumpy on stage which I have witnessed to a point in the past. However, what is never in doubt is that he is always accompanied by an outstanding group of musicians who will hang on to his every movement and twitch to ensure the right note is hit and the beat is always spot on. And then again, perhaps more than ever before, I for one am here for the music and not to hear some inane and meaningless banter from the main man just to fill the time. As far as Van goes, it’s the music that does the talking and that will, hopefully, be good enough for me tonight.

My ticket said the show starts at 8pm and sure enough the 6 piece band emerged on stage bang on time. Barely a second beat had passed when the big announcement came to introduce the great Van Morrison which was met with enthusiastic support from the audience. If the mood is right, this could be quite a night I thought to myself. 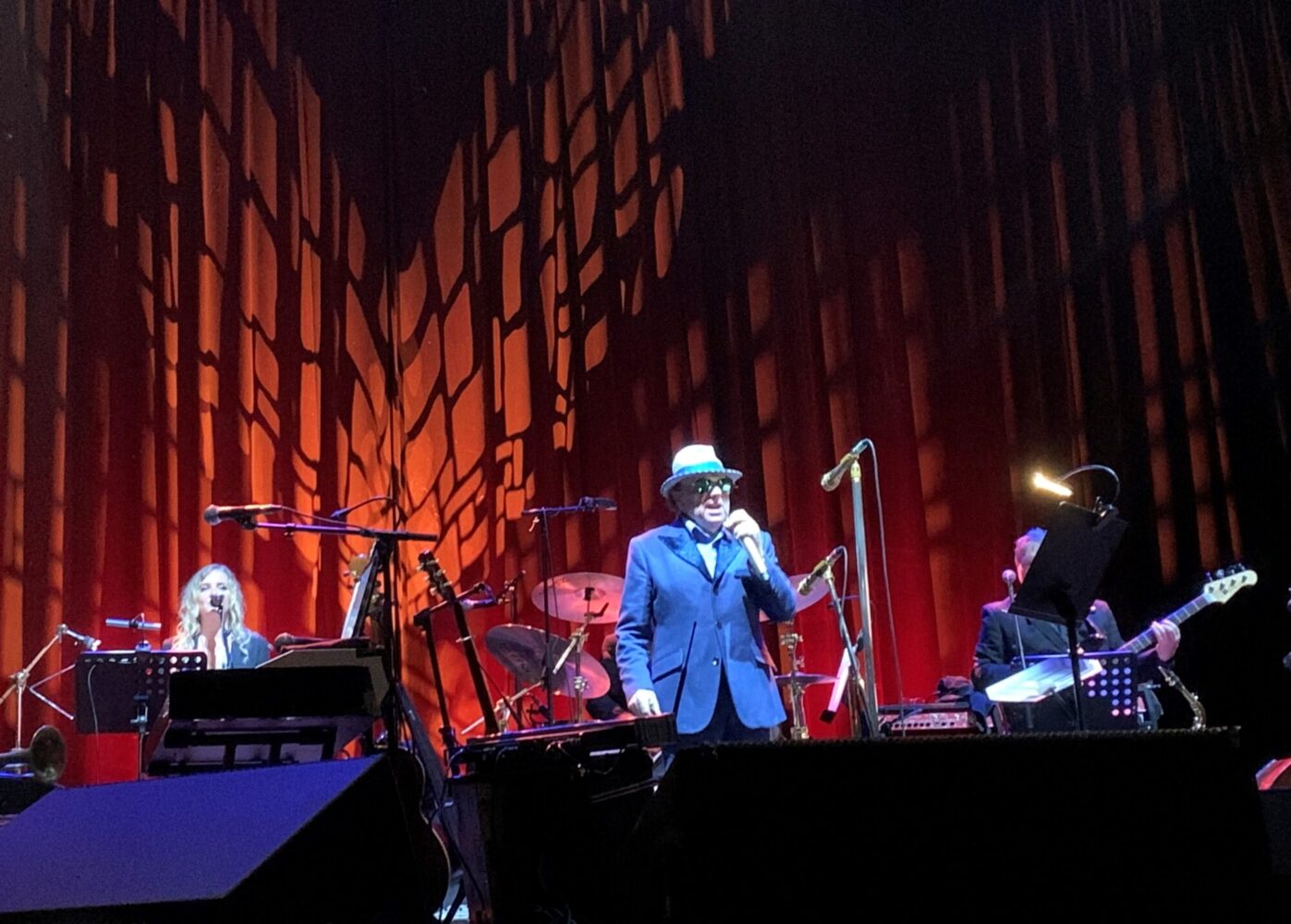 From the opening bars of Deadbeat Saturday Night and both Double Agent and Up County Down which follow, it was evident Van Morrison looked in the mood to perform and entertain and the band was totally on board. These three songs come from his most recent album, his 42nd studio album of his career, Latest Project Record Vol 1, whose focus was very much towards “exploring the classic and timeless quality of the blues from a fresh perspective”. To what extent that “fresh perspective” referred to controversial views and topics explored within it which has once again divided the critics remains to be seen. But like I said, I’m here for the music and, so far, I’m getting the sense that the assembled room reckons it sounds great. The new album was not touched again for the rest of the set.

As Van moved from pure vocals, to saxophone, harmonica and then to guitar, with the band jumping in with selective moments of individual musical excellence, the set made a tantalising journey through his entire career. As usual, Van seemed to make it up as he went along, calling out the next song just as the existing one was hitting its final bar. There was rarely a moment’s pause between each song and certainly no pause for breath. Whether you consider that a lack of engagement with the audience or giving us all total value for our considerable ticket price I will leave up to you – I know where I stand on that.

We got a sprinkling of medleys, with Baby, Please Don’t Go running into Got My Mojo Working, Real Real Gone segueing into You Send Me and Cleaning Windows turning into Be Bop A Lula. We also got some classic covers including Help Me (Sonny Boy Williamson), I Can Tell (Bo Diddley), Think Twice Before You Go (John Lee Hooker) and Jumpin’ With Symphony Sid (Lester Young), with Van and the band putting their very own stamp on the arrangement and sound.

As if to plunder at least one song from a selective number of albums, we were also treated to songs like Wild Night, Ain’t Gonna Moan No More, Magic Time, Precious Time and Why Must I Always Explain, allowing the band to shine in different ways throughout the set as they explored different rhythm and moods.

And, of course, we got some other stone cold classics such as Days Like This, Moondance, Brown Eyed Girl which closed the main set, and the encore of Gloria which allowed Van to finally depart at the end of the main lyrical conclusion before the band continued with an extended jam to close out the proceedings, with a huge roar of approval from the assembled masses who were very clearly engaged with the music.

For anyone thinking Van Morrison may be past his best, think again and come and see him perform live. His voice is still as strong, true and warm as ever and he leads his band with a slickness that may be unparalleled currently in the world of entertainment. Once again I came away with the impression that Van Morrison never tries to merely replicate what has gone before, but focuses more on re-inventing the present and the future.

All told, this was a masterclass in the arrangement and performance of an outstanding set of songs. This was quite a night after all. So all I can say to Van Morrison and his fine band after an evening like this is…….thank you for the music.