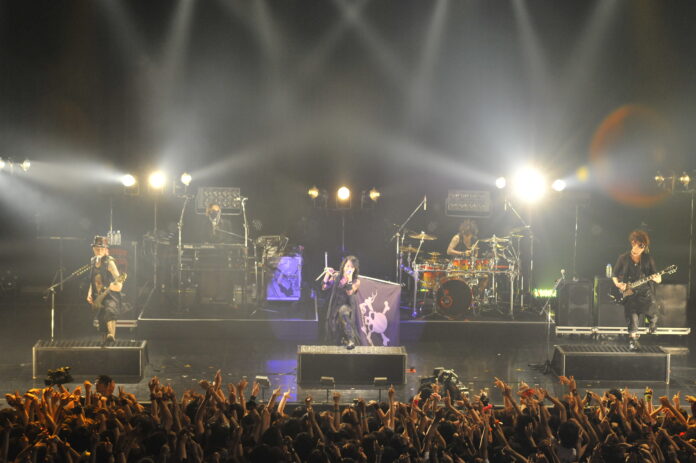 They are a perfectly concocted mixture of LA glam rock anthems scored with the dark underbelly of Nine Inch Nails styled melancholic electronic scuzz. The high voltage is played by a gang of Japanese rock n roll droogs who look like pretty scarecrows dressed in the most perfect combinations of neo Gothic black to a sold out audience of thrilled Japanese youth.

This, though, is not the boy band with the same name- although they do get a lot of screaming rock girls at the gigs. This is pure unapologetic rock n roll with a whiff of sex in the air but the band can back it up with their high voltage and dark anthemic rock n roll.

VAMPS are cranking the electricity and the packed Tokyo venue is going crazy in a very Japanese way. As the band thunder though their glam rock with that twist of dark electronics the audience is totally wrapped up in the noise.

Instead of some kind of wild moshpit the crowd is waving one arm in the air and occasionally throws up and catches a freshly bought t shirt from the swamped merch stand in the air before catching it and carrying on with the one arm dance. It’s the politest and best behaved crowd I’ve ever seen at a rock show, which is no bad thing, and doesn’t drop the intensity level which remains at full adoration for the whole set.

VAMPS are a blur of long hair and perfectly teased, walk on the dark side, imagery. They have the songs and in frontman HYDE they have the voice- a voice that slips easily across registers and songs. HYDE is already famous in Japan, his other band, L’Arc-en-Ciel are huge here and VAMPS were formed as an exercise in wandering round the dark side with fellow rock n roll renegade- the charismatic insect like, guitar playing K.A.Z from another big japanese band Oblivion Dust.

The band are already selling out these 1000 capacity joints every night in Japan and have played select shows around the world and festivals int he Uk- two albums in they are ready to break out proper onto the international circuit. They could easily make it in the UK where a huge scene for this kind of glum glam still exists and there is an audience that still believes in the power of rock n roll.

This is a band that have studied the glam rock swagger of the LA poodles like Motley Crue and their ilk but have been smart enough to filter it through the Cult and Ian Astbury’s fantastic vocals and then twist it all with that dark electronica and that’s what makes this trip more interesting. Like the vampires they want to be, they have gorged on the blood of the corpse of rock n roll and returned with superhuman energy.

Not quite a straight gang of rock n roll droogs, VAMPS have a melancholic smartness underneath their party rock n roll anthems that have made them one of the biggest bands in their home country. They talk of the Cure and Depeche Mode as much as rock n rollers and it’s this twist in the two styles that will be their salvation.

Not that the crowd cares about these details – they are going as crazy as the Japanese go and the intensity is there to be felt. VAMPS drip the melody that the Japanese love and they deliver with the perfect, machine like chops.

Japan is in love with VAMPS who play loud and play perfect. They are so tight that it’s like some kind of freak machine- the tightest band ever in rock? They can’t be far off. They don’t put a foot wrong and are almost too perfect in their quest for rock.

Initially they seem like a perfect take on Western rock but that quest for perfection is what makes them so Japanese- in a nation were every detail is micro managed from the food to the clothes to the buildings. It’s this razor sharp quest for perfection that gives VAMPS a Japanese flavour and an extra layer of intensity and massive power.

They deliver a flamboyant, loud and flash rock n roll with a neat undertow of darkness and  it is played by pretty freaks in black clothes which is still a big part of the currency here and they deliver this this with a high octane brilliance.

No wonder they are huge in their home country. No wonder the rest of the world is starting to catch on…

Put another dime in the jukebox baby…