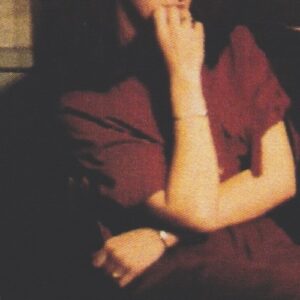 It’s easy to put the languid lo-fi of Value Void in a box marked ‘post-punk’ and most critics have done exactly that. But the female-fronted London trio prefer the term ‘proto-punk’ and they’re right.

Their debut album Sentimental has more in common with the first wave of bands to spring up inspired by punk’s DIY ethos, specifically The Raincoats and The Vaselines, but also successors from Young Marble Giants and Guided By Voices through The Breeders and Throwing Muses to fellow travellers Goat Girl, who mine a similar seam of ennui.

Formed two years ago amid East London’s lively underground scene when two ex-pat Argentian friends, Paz Maddio (guitar, vocals) and Marta Zabala (drums), were joined by Luke Tristram (bass), the album was written in partnership by Maddio and Zabala in the time-honoured fashion of Bernie Taupin and Elton John – Paz penning the lyrics and taking them to Marta to be spun into songs.

Value Void are not reinventing the wheel and not pretending to: just demonstrating that wheels work perfectly well in their most primitive form. Their sound is simple and minimalist: the guitar jangles and bass bubbles, the drums bash and cymbals crash, and Maddio’s listless, girlish vocal seeks out the melodic corners of stuttering, stop-start songs with lyrics that sum up millennial urban life.

“I’m so bored I don’t wanna go out,” she sings on Babeland. “People at night are so weird.” Never has 21st century London been captured quite so succinctly from the perspective of a single twentysomething. Reminiscing about a past romance on Back In The Day is an equally joyless experience: “Without any rules / I don’t want to play / Didn’t have a second name / When I met you… Back in the day.”

Mind is a lullaby/lament that recalls early St Vincent while Teen For Him is like Lesley Gore fronting the Velvets, Maddio finally finding what she’s looking for (and producing an excellent new adjective in the process) as she analyses those conflicting feelings over a churning guitar riff: “We are nothing alike / We have nothing in common… I’m so teen for him! / I’m so teen for him!”

Recorded in south London’s TVT studio with producer Euan Hinshelwood of Young Husband, Value Void’s sound is simple and taut with minimal embellishments: a double-tracked vocal here, some tape delay there. Short and sharp like all the best punk albums – its nine songs fly by in 30 minutes – Sentimental grinds to a melancholy close with the bittersweet drone of The Deluge and Dead Ladies Lament, a slow, simple, repetitive dirge, over which Maddio recites the ominous mantra: “She was already dead when she came in.”

Value Void are online at Bandcamp and on Facebook.