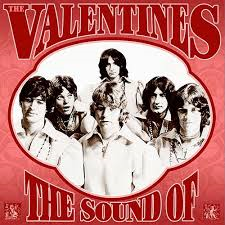 The complete Clarion/Phillips recordings of AC/DC’s Bon Scott’s most successful 60s outfit, rounded off with some rare TV broadcast material by their forerunners the Spektors….Ian Canty travels the highway to hell when it was just an A road………….

Of recent weeks, it has been my pleasure to review a few items with connections to the roots of possibly the quintessential Hard Rock band, the Scottish/Australian multi-headed behemoth AC/DC. There was the box set of Brian Johnson’s Glam Rock adventures with his Geordie boys (read more about that here) and the lovely Psych-Pop of Grapefruit, who were headed up by George Alexander, the big brother of Malcolm and Angus Young (For more info about Grapefruit you can go to here). Now following on from that we have this disc, which brings together all the 60s recordings of the Valentines, who featured as dual vocalist the late, great Ronald Belford “Bon” Scott, lead singer of the band in their bottom-booting 70s halcyon days.

Born in Forfar but settling as a youngster in Melbourne, Australia, Bon (after a further move to Freemantle) joined up at first with Beat combo the Spektors, mainly as a drummer but singing the occasional vocal spot too. Four of their tracks from a TV performance (on a programme called “Club 7-Teen”) by the band in 1966 are tacked onto the end of this collection. Although they are are all cover versions, the band do have a decent crack at the Garage band staple “Gloria” and the other tracks are accompanied by the fervid screams of their female followers, so they must have been doing something right.

After a while the Spektors merged with another local band the Winztons in late 1966 and the Valentines were born. Utilising twin vocalists in Bon and Vince Lovegrove, they made great strides on the Perth suburban scream dance scene, a localised variant on Beatlemania. Their pure pop sound and clean-cut image soon brought the band to the attention of Martin Clarke of Clarion Records, the leading independent record label in that part of country at the time.

The Valentines early recordings for Clarion do not bear any real comparison to AC/DC, being pretty much straight mid-60s pop music with more in common with the fellow countrymen/ex-pats the Bee Gees and Oz’s premier home based outfit, the Easybeats (who also featured a Young brother of course, the links keep on coming!). Though pleasing enough (and they enjoyed decent regional Top 40 success with these offerings), the first three singles were a bit derivative in their approach to the material, with only a Souled-up and smart cover of the Small Faces “I Can’t Dance With You” standing out. The fourth single however, a cover of the Easybeats “Peculiar Hole In The Sky”, is where the Valentines really took off as a record making force with this ambitious and multi-faceted mini-epic.

Though the record itself stiffed, it emboldened the Valentines to strike out on a new, tougher musical path. An excellent version of Steppenwolf’s “Sooky Sooky” was for some unknown reason unissued at the time, but their next attempt (other than a daffy Coke commercial, also featured here) “Ebeneezer”/”My Old Man’s A Groovy Old Man” really hit the mark. “Ebeneezer”, a Kinks-like character study is good enough in itself, but the original b-side “My Old Man…..” was the more popular track and eventually became their biggest hit, charting in the key Melbourne and Sydney markets. It’s like one of those post-hits Troggs recordings, which is not to demean it as I bow to no-one in my admiration to Reg Presley (RIP) and his merry men. This track is just simply irresistible proto-Glam/Bubblegum.

Bubblegum, yes…..in 1968 the idea of very simple, almost nursery rhyme, stomping pop music was at its peak and the Valentines were persuaded, with the fluke success of “My Old Man”, to follow that ultra-commercial path for the bulk what remained of their recording career (now on the Phillips label). Though they did put out a few quite basic handclappers like “Nick Nack Paddy Wack”, there was also “Getting Better” with a bluesy tinge that slightly hints at Bon’s future career. They racked up local successes again, but after a final hit with the lush ballad “Juliette”, the band split up wishing to pursue different musical aims, a drug bust being the final nail in the Valentines’ coffin. Scott joined Prog band Tapestry before hooking up with AC/DC in the mid-70s to worldwide success.

Though this CD does not give one any real pointers to the direction that Bon Scott would take when he joined up with AC/DC, it does grant us a nice glimpse into how Beat outfits in Australia dealt with the rapidly changing music fads of the late 1960s. A worthwhile collection for AC/DC freaks and indeed any fans of good 60s pop music.