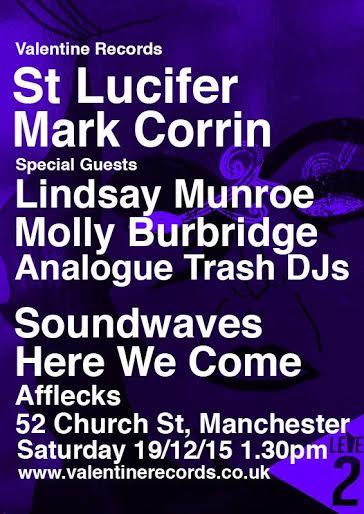 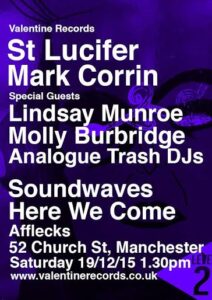 19th December 2015
Valentine Records, an independent Manchester label which is set to relaunch in January 2016, seems determined to defy authority – and give you a gig early! Think of it as a sneakily-opened selection box before the big day.

Yes, on December 19th, all are invited to a live set of Valentine acts – St Lucifer and Mark Corrin – along with special guests, all live from the ‘Soundwaves Here We Come’ record store in Afflecks Palace.

It’s an utterly unique event, with the famous Northern-Quarter emporium of the weird and wonderful transforming into a celebration of local musical talent. It’s even in the afternoon (beginning 1.30pm) so you have no excuse! This gig is a great example of what Valentine Records stands for after all; publicising the powerful music of the present-day – especially in Manchester.

Plenty of new music is lined up, including the chance to see the Manchester-based four-piece St Lucifer  perform their new single ‘Van Der Lubbe was Innocent’. Expect dark beats and frantic vocals – a real expression of the energy in Manchester’s music at the moment. David Fox, member of St Lucifer and Valentine Records, offered this comment on the gig:

“I’d say it’s a low key taster of what’s to come. St Lucifer are clearly completely inappropriate for playing a small record shop (we’re far too loud and visceral for starters) But Soundwaves is our home and we really wanted to do something in December to tease what’s coming in 2016. It’s going to be a massive year for both the band and the label….”
What could be better than being part of the action? Big sounds from a small shop will be ready to blow you away!

Also performing will be Valentine-signed act Mark Corrin, a Liverpool-born Manchester based writer and radio producer, whose musical connections cast light on what appears to be Manchester’s musical web. Yes, the fascinating thing about music in this city is its interconnections and inclusivity. It’s a web, just like the records, which keep spinning. Mark Corrin offers an eclectic mix of electronic pieces, whilst also bringing catchy melodies and powerful basslines perfected through his practice with ‘Rose and The Diamond Hand’. He has also collaborated with the likes of Can’s Damo Suzuki, Blue Orchid’s Una Baines, and Andy Votel . This is the place where one musical artist can unlock so many more.

If modern Manchester music is a web, you’ll find it hard not to get caught in it! Turn to your left and you might brush shoulders with one of the performers in the intimate venue ‘Soundwaves’ is set to offer. Lindsay Munroe  with her  guitar and atmospheric lyrics is set to feature – and there’s the singer Molly Burbridge who’ll also be bracing the shop floor. When people are told to think of a Manchester music scene, initially their thoughts turn to parts of the past – Joy Division, New Order, The Stone Roses, The Smiths and so-on. It is here that pieces of music are pieces of history; combinations of incredible legacies and unique albums. We can look back on ‘movements’ such as ‘Madchester’ and ‘baggy’ with fondness. But it is through just looking around that you can where the real ‘movement’ lies; and Valentine is testament to the fact that there is plenty of action taking place in the Manchester underground right now. It is a city where its music truly does have a physical presence; and one you can get involved in.

Getting involved with the Valentine event couldn’t be easier on the 19th December. Defy the clapped-out Christmas tunes of the shopping centres and drop in for the performances if you can. The gig in Afflecks is set to be the first of its kind; seeing a 2nd floor store transformed into a venue for raw talent. Owned by Alex Lee ‘Soundwaves’ is making a mark by not only by keeping vinyl turning, but turning out exciting local artists too. The shop supports creative aspiration, inviting new bands to drop off their mixtapes and also displaying artwork designed by local talents; including customised music clothing by Charlie Bergmann. The gig is the next key step in supporting the city’s culture.

Mark Corrin offered this reflection on the significance of the upcoming gig:

‘I personally think that smaller gigs are often preferable to larger gigs. At smaller shows, the divide between the stage and audience can be broken down, so there is scope for much more connection and a more intimate kind of performance. Also, as a music fan I think it’s nice to be able to hang out and chat with the artists a bit after the show, maybe buy some CDs and merchandise off them in person, etc. It’s going back to that DIY ethic that artists and labels are also adapting again online. For me, it’s a more enjoyable experience than being herded into a big venue and watching an act from what feels like half a mile away.

Regarding the Soundwaves gig, it’s very exciting to do an instore show in a record shop as I’ve never done one before. I love performing at more interesting locations like this, and it will be lovely doing a gig in the afternoon for the Christmas shoppers! I am still working out what kind of set I will do, a vocal or instrumental one so it has the element of surprise for me too.’

Valentine promise that special guests add even more layers to this ‘surprise’; a mixture of experimental, unapologetic music from other Manchester artists. Certainly two fingers in the face of face of anyone who says that Manchester music is ‘dead’. Lindsay Munroe will be ready to perform with her latest track ‘Desert’; a beautiful folk-inspired guitar piece, as well as combination of other tracks. Molly Burbridge will be sure to bring a bold performance packed with passion, which deserves to be seen and not just heard. And the source of even more surprises will surely be the Analogue Trash DJ’s, bringing beats from the independent record label known for its surreal album covers and other-worldly music.