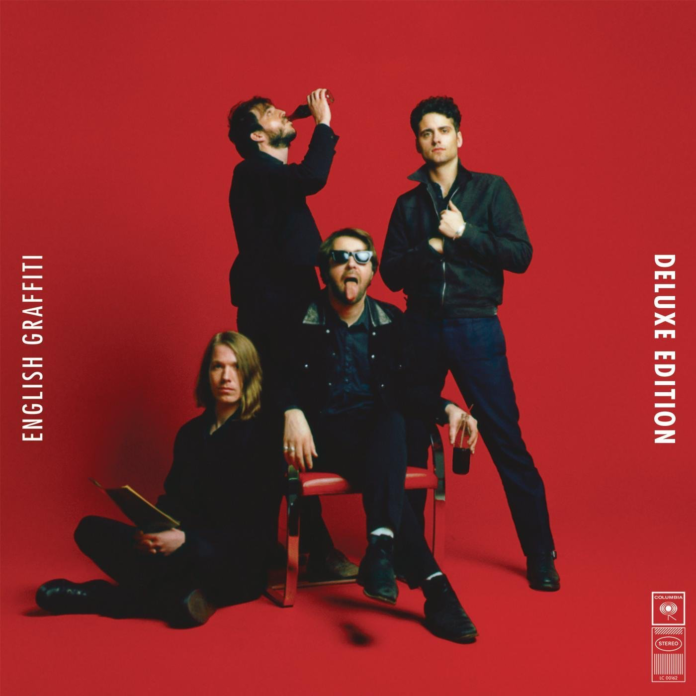 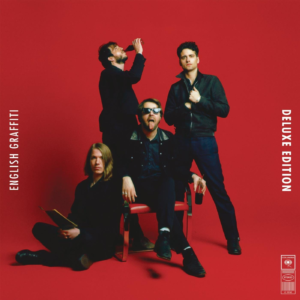 English Graffiti is The Vaccines’ third album following on the heels of their debut in 2011 and follow-up (Come Of Age) in 2012. Katie Clare’s verdict on their new one can be found below.

Three minute rockets of all out shake it till you drop hooks, acoustic tributes to shimmery tear stained heartache and dreamy sentimental harmonies: English Graffiti has it all. And it all starts with Handsome. Like a wasp trapped in a jam jar furiously buzzing and snarling it slams about bouncing itself off its shiny confines. Snarling gives way to a self-congratulatory tone as Dream Lover with its lavishly cavernous cosmic atmosphere triumphantly struts its chunky solid rhythms to and fro; then suddenly like a wisp of smoke vanishes.

The ambivalent passion of Minimal Affection initially seems like new terrain but is purely a broadening of where The Vaccines were with Melody Calling two years ago, nevertheless the engagement with poignancy on (All Afternoon) In Love is pretty, relaxing and familiar and its repetitive ‘“I’ve fallen in love” ending emphasises the darkness of unresolved melodrama and twisted longings of passion: The Vaccines genuinely have many layers.

20/20 comes roaring in like an express train, thrusting and relentless – drums and guitars playing catch up with Justin’s, second stage on the Kübler-Ross model, vocals. There’s many a moment in English Graffiti that brings to mind that mid 70s to mid 80s propensity for sensitive singer-songwriters having a bit of a mess about with something heavier producing the kind soft rock that lands somewhere between the power ballads and emotional teenage poetry. Denial is a model example of that style of silky smooth faintly cheesy production. Justin’s falsetto gives it more than enough legitimacy, however it does stand weakly in comparison to the rest of the album.

Once you stop yourself from singing “I spy something beginning with S”, Want You So Bad is an interesting go at a sultry new wave divergence, a dispirited seduction where lush guitars and masculine wantonness build musical crescendos that while casting a mesmerizing spell ultimately offer nothing reachable, nothing physical and emotionally risk free. Radio Bikini takes us back to how the album opened with carefree noisy fuzz with a lot more going on than first meets the ear. It’ll transfer well to a live environment where its influence to flay your limbs about will pay dividends.

Maybe I Could Hold You is the sexier version of Dream Lover and more emotionally adult than Want You So Bad. It’s a simple yet really beautiful song heavily weighed down by the drums and weighty production but which still manages a sweet gracefulness. Pillaging the late 70s power ballad vibe one more time, Give Me A Sign is 100% cut from the sing it at the top of your voice cloth, its unpretentious effortlessness makes it hard to pick on and by the time the lyrically unadorned Undercover rolls in you’ve sung your heart out and content to allow the ambient-ish outro to relaxingly massage you calm.

As all success groups at some point have to decide – go for the change in direction which could cost a considerable portion of your audience or risk complacency and be dinosaurs? The Vaccines realise that there is jeopardy in both options and head somewhere in between with what feels like an honest organic growth to their sound that’s certainly widely influenced yet thankfully not over worked. The band wanted to make an album to enjoy in the now and to some degree they probably have; it’s less mature, lacks cohesiveness and is more derivative than their two previous albums however there is nothing like going on a bit of an adventure to put a bounce in your step, colour in your cheeks and once again that’s what The Vaccines have done.

English Graffiti is available from the usual physical and online retail outlets as well as on iTunes for download.

The Vaccines are appearing at several festivals throughout the summer including Glastonbury and T in The Park. The Vaccines currently announced UK dates are below: check online or with the venues for ticket availability: