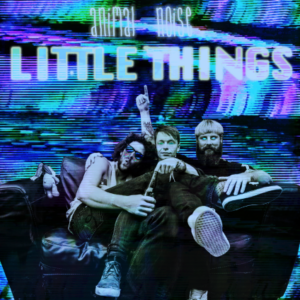 Colchester Indie trio Animal Noise are pleased to unveil their new single ‘Little Things’ this November. Little Things, with its earthy, yet modern production (mixed by Gethin Pearson for Big Life Management– Prides, The Hearts, Mallory Knox) is described by Jack Gordon-Abbott, the band’s drummer as “a drop-tuned, riff-soaked ballad about temptation and obsession”.

The song, pulsating with jagged rhythms and big guitar lines that underpin Josh Sandifer’s distinctive and atmospheric vocal performance, is a follow up to the band’s ‘Sink or Swim’ EP. Since the release of the EP earlier this year, the band have been touring across the UK, selling out their hometown show at Colchester Arts Centre and playing high profile festival dates such as British Summer Time Festival in Hyde Park, Standon Calling, Fling, Ramsbottom and Wilkestock amongst others.

Animal Noise’s music has recently been picking up love from key tastemakers God Is In The TV, Louder Than War, Sofar Sounds, Jammerzine, Indie Band Guru and XS-Noise, as well as radio support from BBC 6 Music, BBC Introducing, Virgin Radio and SOHO Radio, and US College Radio Stations.