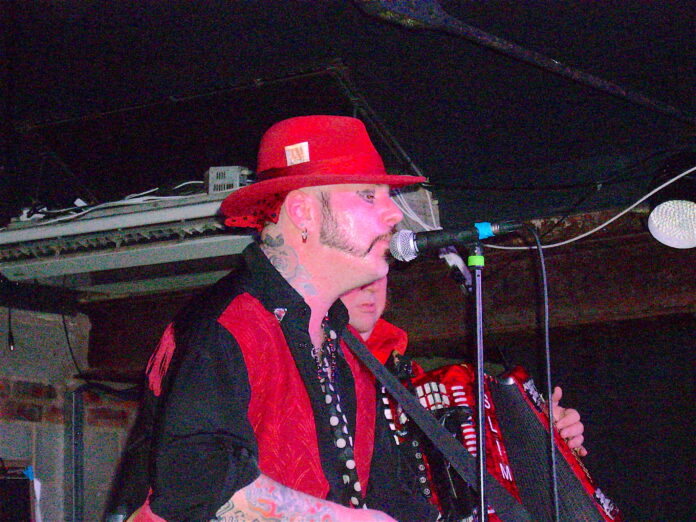 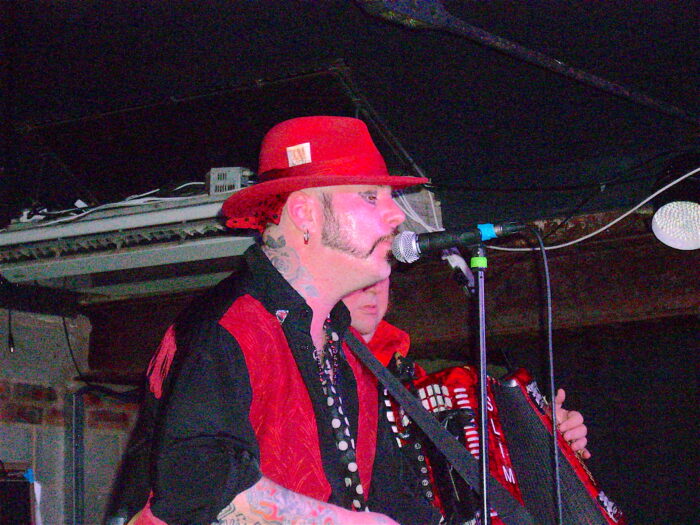 Andy Santiago’s been back worshipping at the altar of “probably my absolute favourite ‘non-metal’ band at this moment” band.

The Urban Voodoo Machine are a relatively new thing to me. It’s only in the last 12 months that I have really discovered them and for a band who have been laying down their own highly original brand of “Bourbon-Soaked Gypsy Blues Bop ‘n’ Stroll” since 2003, I often ask myself, “what took you so long?” However, better late to the party than not at all! And on this saturday night, there is no finer party in York, and probably throughout the North of the country.

After finishing the best part of a 10 hour shift at work, (my penance to get the night off) the taxi I had booked much earlier arrived, not fashionably but intollerably late outside the venue and the man I was to meet was already sat outside the next door Bierkeller in the early evening sunshine, ever present bourbon and cigarette in hand, the one and only, Paul-Ronney Angel.
A quick chat and some photos for some fans that had come over from Cheshire for the gig and it was down to business, P-R and I were going to the pub!

Paul-Ronney Angel is splendid company and a great companion to just go for a beer and a chat with. He’s friendly, intelligent, has a wicked sense of humor and a never-ending stream of stories.
We pass an abandoned television en-route to the pub, “Hey, I wonder if there’s a window we could throw that out of near here?” muses Mr Angel.

We sit outside armed with beer and Bourbon and talk all things. From the tragic loss of two band members in the last 12 months to the forthcoming new album, expected in February next year. From some of the band members getting mistaken for a stag night on a ferry back from some European shows due to their standard Voodoo uniform of black and red to the unacceptability of ‘Hipster’ bars serving beer in brown paper bags. All the major issues were covered and more. All too soon, P-R has to leave as time is moving on and there’s the slight matter of a show to consider. We bid him farewell, finish our drinks and head around the corner to Fibbers for the gig. A one-off show that involves a near 500 mile round trip for the band to play. An undeniable work ethic that other bands could certainly learn something from.

Paul-Ronney had told us the band would be playing as a 7 piece, on occasions The Urban Voodoo Machine can have up to 11 members so I was wondering if this somewhat depleted line-up (albeit featuring the recently added trombonist) would have any effect on the sound.

As the band marched on in the traditional manner of a funeral march and tore into the obligatory set opener ‘Theme from The Urban Voodoo Machine’ in all it’s spaghetti western glory the packed Fibbers went collectively berserk and the question on how the band as a seven piece would sound was answered. Magnificent. Obviously.

The raucous blues stomping of ‘Down in a Hole’ followed and for the best part of 2 hours, The Urban Voodoo Machine smashed out a set of all the hits, a couple of teasers from the new album and even some of the more obscure material.

A few sound issues aside, like the total omission of The Reverend’s upright bass, the gig was flawless as ever, I’m really not sure they could play a shit gig even if they tried. 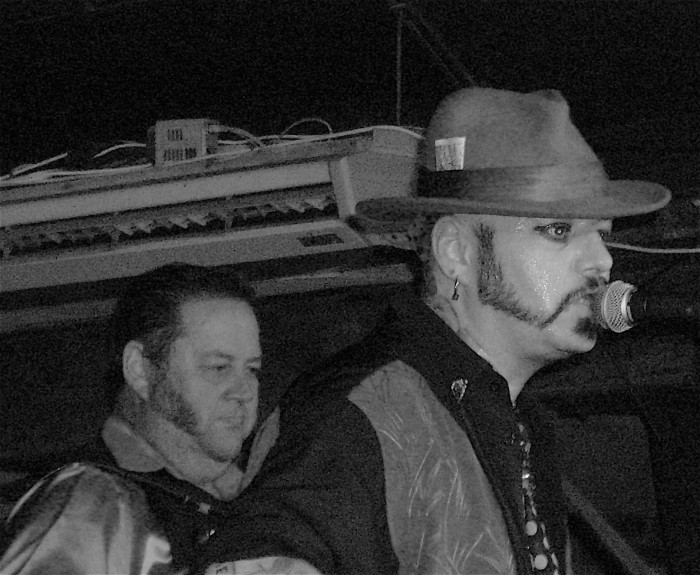 Paul-Ronney Angel is without doubt one of the finest frontmen you will ever see with any band but it’s not just him, every member of the band brings something special that combined is a truly potent gumbo. From the accordian and piano of Slim to the feral sound of the brass including possibly the most terrifying lady ever to have picked up a sax in the form of Lucifire and the dual percussion attack from a zombie (the late J.Roni Moe) and Jary, everything is just beautifully chaotic and intoxicating combination.

It’s hard to pick out any specific highlights of the gig but forthcoming single ‘Crazy Maria’, ‘Goodbye to Another Year, ‘High Jeopardy Thing’ and brand new song ‘Rusty Water and Coffin Nails’ were particularly memorable.

Given the tragic events of the last 12 months with the loss of two band members, Paul-Ronney returned to the stage and played a beautiful solo tribute to late guitarist Nick Marsh in the form of one of Nick’s solo tracks ‘Destiny Angel’. What could have been a heartbreaking moment was actually transformed into something quite celebratory and moving.

Throughout the gig Paul-Ronney made no secret of his distaste that after their set the venue would be transformed into “a fucking House Music disco” and when he announced it had being cancelled, the band were playing all night and the previous 90 minutes had just been a soundcheck, the collective cheer was something that the venue owner might want to take into consideration the next time The Urban Voodoo machine are in the building!

After being carried to the bar on the shoulders of an audience member for a quick shot of bourbon and showing a complete disregard for the smoking ban, Mr Angel and his band of merry minstrels brought the evening to a close with the traditional ‘Love Song # 666’ and another member of the audience was brought on to display the lyrics printed on the back of his t shirt. After showing a little reluctance to leave the stage, he came very close to receiving some encouragement in the form of a well-placed stiletto courtesy of Miss Fire!
A night that had everything from Blues, Rock, Country, Latino and pretty much everything you could imagine under the umbrella of ‘Bourbon-Soaked Gypsy Blues Bop ‘n’ Stroll’ was coming to an end, the band lined up and took a bow. The York crowd showing deafening appreciation.

As we spill out onto the York streets in search of more mischief, the congregation goes off in various directions in varying states of shitfaced-ness and you can be sure they will all return for the next time.

I make no secret of my enthusiasm for The Urban Voodoo Machine, I fucking love that band and I’ll absolutely guarantee you will too. I cannot recommend going to one of their shows highly enough, they tour constantly and will be passing somewhere near to you eventually. Go and join the Voodoo cult. Your life will be better for it!

Paul-Ronney told me about some forthcoming releases during our conversation. ‘Crazy Maria’ will be released as a single soon, date TBC. There are plans for a compilation album of all the singles (“not so much ‘Greatest Hits’ but ‘Greatest Shits’ cackled P-R!) and the new album ‘Hellbound Hymns’ is expected around February 2016.

The Urban Voodoo Machine can be found online here: theurbanvoodoomachine.com. They’re also on Facebook and tweet as @uvmlondon.