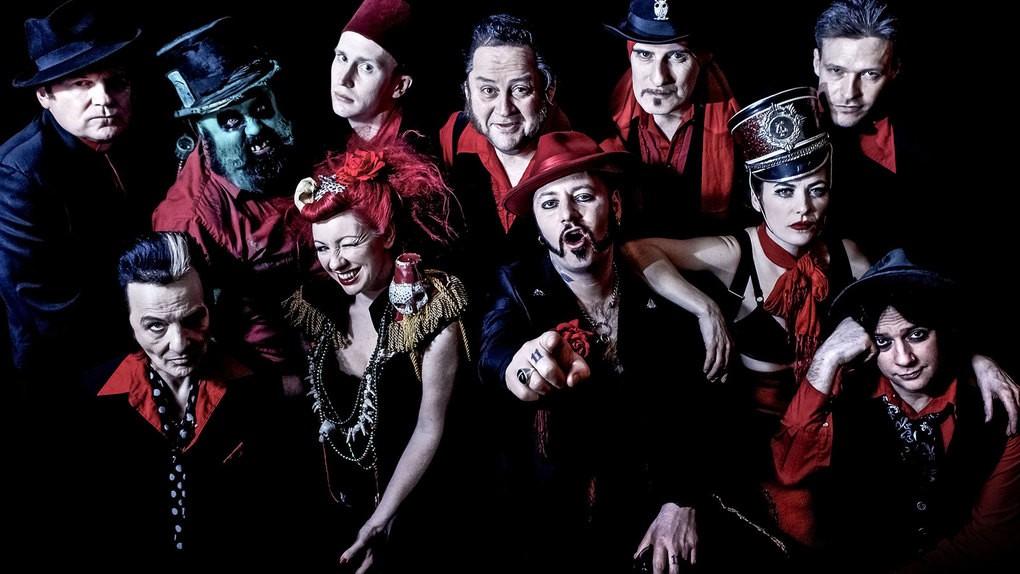 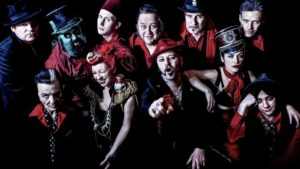 Their show (and it is an eye-popping, can’t-take-your-eyes-off-for-a-second spectacle) is all deranged Noo Orleans jazz meets blues-ey rock and roll with a dash of punky attitude and lots of audience participation. Frontman Paul-Ronney Angel is the leader of this raffish clan and he is part freak-circus ringmaster and part wandering minstrel. The previous singles, EPs and albums  showcased their very singular take on what they themselves term as “Bourbon- soaked gypsy blues bop ‘n’ stroll” and while not capturing the bug-eyed lunacy of the live experience, are very good indeed.

The band had a traumatic year in 2015- guitarist and co-writer Nick Marsh (formerly of the much-loved Flesh For Lulu) died after a short battle with cancer and Rob “The Kid” Skipper died from an accidental overdose of heroin a few months earlier. Marsh played on many of the tracks on Hellbound Hymns, despite his illness, and his raw spirit roars through the tracks. The eleven-piece band pressed on despite this and Angel seems to be a man on a mission to commemorate his fal 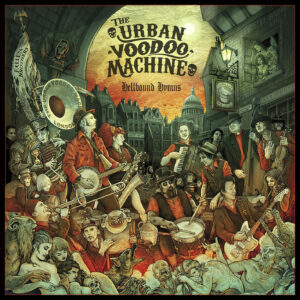 Hellbound Hymns is something of a sacrament to the last couple of years and the toll they’ve clearly taken on the band. It’s very much lower key and melancholic than previous release, I guess that’s hardly surprising given the circumstances, but it also has a real sense of geniality coursing through the songs. Bucket Of Blood is very typical TUVM and takes the notion of the boozer as the centre of all things wise (it is, isn’t it?) and runs with it. Nick Cave tried something similar with “Thirsty Dog” some years ago and it works really well. In fact, I’m sure the bar in Cave’s version of “Stagger Lee” is called The Bucket Of Blood but lets not split hairs.

Rusty Water And Coffin Nails is another tongue-in-cheek paean to the joys of debauchery and while the music isn’t the rollicking charge of before, it’s nice to hear TUVM in more reflective mood. The album on the whole is less traditional-rock-guitar than previous efforts (although none of them could ever be classed as rock music per se) and the groups recent sojourns as the Urban Voodoo Marching Band (formed for Marsh’s funeral celebration and laterally appeared at the Classic Rock magazine’s awards last year) have clearly had an impact on this set of songs. It’s at times a wake, at times a party and always irresistible. Angel states that he believes that the best way to remember those lost is to live life to the full at all times- he’s living, breathing, drinking and hell-raising testament to that and with Hellbound Hymns The Urban Voodoo Machine have paid their respects in the best possible way.