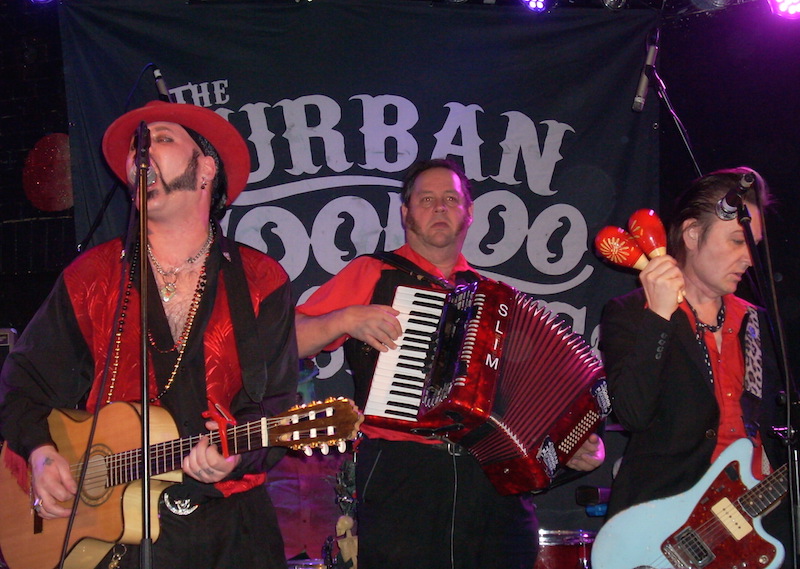 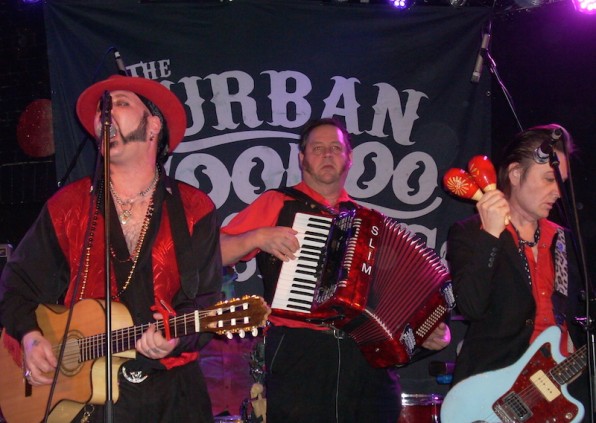 Andy Santiago was lucky enough to catch “the collective of shadowy, London based, ne’er do wells” The Urban Voodoo Machine in Leeds last week as they continue their march to world domination. Here’s how the night went down.

Out of all the bands I saw live last year, The Urban Voodoo Machine stand tall as one of the very best. It’s been quite a while since my first experience of their ‘Bourbon Soaked Gypsy Blues Bop ‘n’ Stroll’ in York last year and on that night, whilst interviewing the unfeasibly charismatic front man Paul-Ronney Angel, he told me of a gig that had been booked for early new year in Leeds.

There was no way on earth I was going to miss that, so on a cold January night, the wife and I set off to Leeds and the legendary venue, The Brudenell Social Club, for another dose of Voodoo. 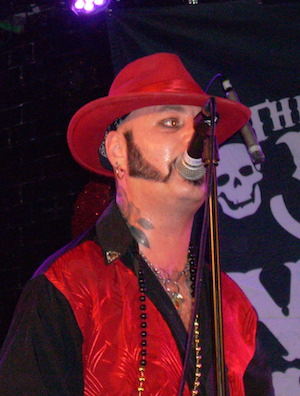 The Brudenell is quietly doing its own thing in an area of Leeds where you would never expect to find a venue that is at the centre of a thriving and hugely diverse live music scene. The venue itself is something like a cross between ‘Phoenix Nights’ and the pub from ‘Shameless’. A huge cross-section of people inhabit the place, from the hippest of students to the burnt out wreck heads of yesteryear. All are welcome and all are attitude free, having a good time seemingly the only agenda.

On entering The Brudenell we peer through the door into the room where bands play and see a familiar figure in an elegant hat sound-checking with some savage harmonica. Nothing else for it but to adjourn to the bar area, grab a pint and wait for the doors to open.

Returning to the bar, the owner of the elegant hat is hanging out and I get reacquainted with Mr Angel. Tales of bizarre festival bookings at holiday camps, new songs, and general misbehaviour are told and as we stand outside smoking, P-R shows me the touching memorial he has to late fiddle player Robb ‘The Kid’ Skipper. A new tattoo of a ship’s steering wheel sits proudly amongst the other inkings on his arm. As it’s getting close to showtime and the Arctic weather is taking its toll, we leave the exotic fragrances of the smoking area and head back inside. Paul-Ronney to prepare for the gig, myself to continue the quality control assessment on the draught San Miguel.

By now the doors are open and second support Hannah Rickard and the Relatives, are in full flow to a surprisingly packed room. I’m not sure why it came as a surprise, P-R had told me they sold 200 advance tickets but I never even noticed the venue get so busy!

Ms. Rickard and her Relatives (featuring Jary from The Urban Voodoo Machine guesting on drums) laid down a solid and well-received set of stompin’ Rockabilly, all upright bass, quiffs and general sassiness to a room that was now borderline sold out. An ideal warm-up for what was to come. 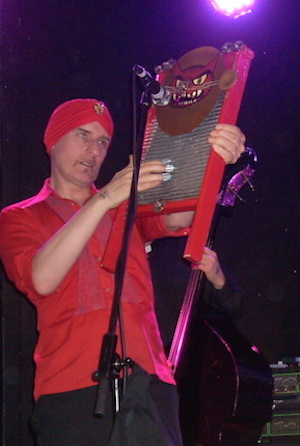 As the air of expectancy thickened, the intro tape rolled and zombie drummer, the late J-Roni-Moe leads The Urban Voodoo Machine onstage and after the traditional introduction from the truly terrifying sax player that is Lucifire, we’re away with ‘Theme from The Urban Voodoo Machine’ and straight into the raucous joy that is ‘Cheers for The Tears’. Sadly, the sound mix was omitting the sax but this was rectified almost immediately.

The set wasn’t as heavy on material from the recent ‘Love, Drink and Death’ album as the previous time I had seen the band, though it was well represented with the gypsy stomp of ‘Not With You’, Latin-soaked ‘Crazy Maria’ and the crowd favourite ‘Pipe and Slippers Man’ all getting an airing.

The band are absolutely nailing it and the extremely polite and diverse Leeds crowd are having a great time. This is turning into a spectacular display of good natured, communal, booze-fuelled mayhem, driven by a demented ringmaster and his band of maniacs. Pretty much everything a great gig should be really.

In no particular order, a truly vicious rendition of ‘Help Me Jesus’ is fired out with P-R sneering the calls for salvation, a highly appropriate ‘Drinking My Life Away’ and ‘Train Wreck Blues’ are all played with all the Hellfire and Damnation you would expect.

The only time the mood is anything less than joyous is during the poignant ‘Heroin (Put My Brothers In The Ground)’ and when P-R silences the crowd to dedicate a heartbreaking version of ‘Goodnight Sweetheart’ to fallen brother, Robb Skipper. At points in the song it appeared the emotion was going to be too much for the band.

The set was rapidly coming to an end and the band left the stage to deafening applause. There was no way the crowd would let them leave, so returning with ‘Killer Sound’, the Urban Voodoo Machine brought the party back. The final song of the night was heralded by a speech from P-R explaining that “No mothers got fucked during the making of this song, sisters most certainly did!”

Yes, it’s ‘Love Song #666′ and the Leeds’ crowd drown out the band on that infamous first verse and the “But darling, I always loved you” parts. With midnight long since past, The Urban Voodoo Machine line up at the front of the stage, take a bow and depart. Except for Lucifire who grabs a mic, tells us how she loves us all and promises (threatens?) to do something quite obscene to everyone in attendance. With that, she leaps off stage and follows the late J-Roni-Moe through the crowd to the merch area where she may, or may not, have made good her promise!

Once again The Urban Voodoo Machine effortlessly delivered a stunning gig and judging by the huge turn-out, may well be on the brink of well deserved, much wider acclaim. This is a band who will provide the time of your life every time you set foot in their murky and thrilling world. If you have never seen them before, what the HELL are you waiting for?