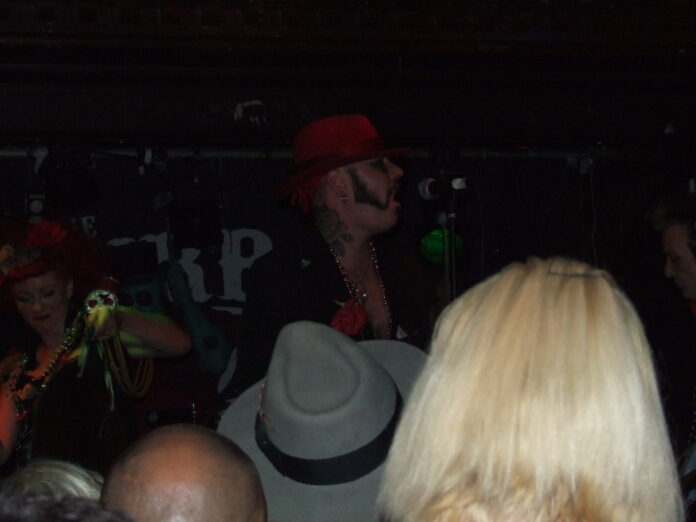 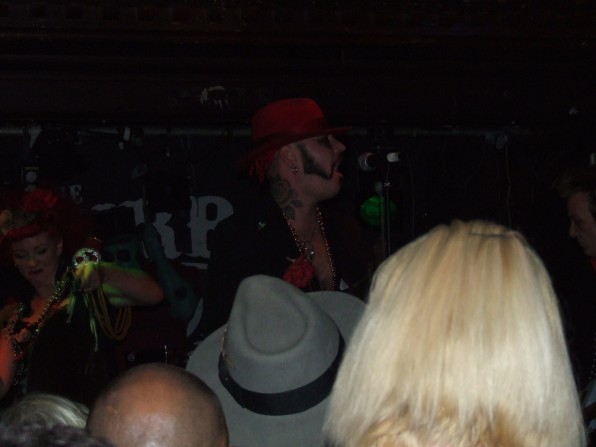 Our man Martin Haslam has done a fair bit of travelling for us over the last year and a half, so when Urban Voodoo Machine rocked up in to what is metaphorical back garden, he knew he had to cover the show. Does it live up to his expectations? Find out below.

Almost exactly one year ago, I witnessed my first Urban Voodoo Machine extravaganza. ‘Gig’ doesn’t quite do them justice. I’d heard about them for a long time but not been in the right place at the right time, e.t.c. I’d fallen for their ‘Cheers For The Tears’ single and had the added bonus of seeing them at my local venue, Bedford Esquires. Since then, two things have occurred to me; 1. For entertainment and songs, this is the best band around 2. I am really lucky to live near to such a good live music venue.

I say this having spent the last 18 months or so travelling around to review gigs for Louder Than War (and primarily to enjoy myself) and in the process have seen many smaller clubs close their doors/fall foul of new noise complaints regulations. I’ve been going to Esquires, like many regulars, since before it was called Esquires; thirty years by now. At an extreme push it could hold 200 punters in the main upstairs venue. An ideal size venue to see an event like this. We all know times are hard for venues of any capacity, but these places stay alive by the finest of margins. My point being, it’s up to all of us to actually turn up and support them. 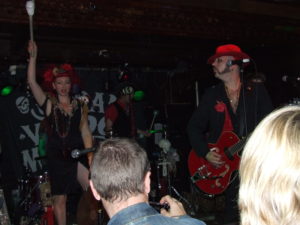 A year on and I think around 100 tickets had been sold for tonight’s performance. Not bad, but I’d really like to see the place heaving. That said, Paul-Ronney Angel and his band of deranged minstrels inspire devotion in their followers; people have travelled to be here tonight and are following them on tour. People similar to me, hurtling past middle-age but still passionate about great music. Kudos to the couple from Birmingham, good on you.

Long John Laundry always deliver their take on the blues, regardless of their revolving line-up, and tonight is memorable for the stinging riffs of Del Bromham (Stray) on lead guitar. I knew he was good, but man, he really did rip it up. Excellent set, some older songs plus highlights from their recent ‘Voodoo Charm’ album.

There are mixed emotions tonight, as The Urban Voodoo Machine continue their tour just days after the death of fiddle player Robb “The Kid” Skipper. Their flamboyant image belies to some that they are a real band, not a novelty. They entertain but take the songs seriously, as new album ‘Love, Drink And Death’ proves.

After entering to their ‘Theme’ music, it’s ‘Cheers For The Tears’ and newie ‘Train Wreck Blues’ before slowing things with ‘Not With You’ and sing-along ‘Pipe And Slippers Man’. They play from all their albums, ‘Killer Sound’ benefitting from a feral live performance in the encore, but they’re not short of sing-alongs with the likes of ‘Help Me Jesus’ and ‘Drinking My Life Away’ dragging the crowd along in their wake.

Quite what the stage invader’s point was, I don’t know. Somewhat the worse for wear, the old fella was under the impression he was “the king of punk”. Still, this is the least bizarre thing at an Urban Voodoo Machine event and sax player Lucifire handled him as sensitively as was possible without batting an expertly made-up eye lid.

They end with ‘Love Song 666’ before a second, gentler encore which would have been better had some of the audience SHUT THE F**K UP! I am generally a tolerant type, but enough, already! Surely you can appreciate more than one facet of a band’s personality? If Paul-Ronney asks for a moment’s quiet in your night out, is that asking too much? I’ll bet you’d have been booted out for videoing Kate Bush. Minor quibble aside (it’s my bugbear), it was another unforgettable night in the company of The Urban Voodoo Machine. Before heading home, I had a brief chat with guitarist Nick Marsh and with Paul-Ronney, both of them patient and hospitable fellows. Hopefully, it won’t be a year before we meet again.

Urban Voodoo Machine can be found at their personal website, TheUrbanVoodooMachine, on Facebook, and frontman Paul Ronney Angel tweets as @PaulRonneyAngel.

Words and photos by Martin Haslam. More from Martin can be found at his Author Archive.