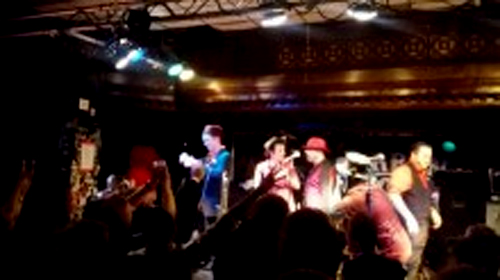 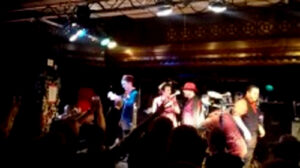 With music venues continuing to close around the UK at an alarming rate, I am a) lucky that my local venue continues to buck the trend, and b) extra lucky that The Urban Voodoo Machine brought their unique brand of entertainment to the club for the third year in a row.

But first, Long John Laundry open proceedings in a heavy blues style. Joined again on guitar by local legend Del ‘Stray’ Bromham, they give the blues a spicy, hard edge, with scorching slide guitar and some workouts which echo The Doors. Check out their recent Voodoo Charm album for further proof.

Last year, The Urban Voodoo Machine arrived to a lament for the recently deceased fiddle player Rob ‘The Kid’ Skipper. This year, they have lost guitarist Nick Marsh to cancer. His passing leaves a big hole, and there is a sombre tone to their performance tonight. However, they give it their all, as we knew they would. Those of us who love them expect nothing less. Lightning From A Blues Sky opens the set, followed by the prophetic singalong Heroin Put My Brother In The Ground. Not With You builds on the gypsy style audience participation, while Train Wreck Blues speeds things up a bit.

Pipe And Slippers Man works our vocal chords again, after a brief stop due to a broken banjo string. Then, after a spirited Crazy Maria we are treated to new song Rusty Water And Coffin Nails. Goodnight, My Dear is always touching, but when dedicated to lost friends, it brings a tear or two. We need Help Me Jesus as a cleanser. Probably the most times I’ve shouted “Jesus!” ever. It felt a bit like a Fast Show sketch, in a good way.

Paul-Ronney enters the crowd with their trombone player, urging all to sit down around them. They know how to entertain. Another new song, Shattered Dreams, then they end on a riotous Cheers For The Tears; “I got news for ya honey, I ain’t dead just yet”. Sterling job by Adrian Stranik of The Broadway Twisters on extra guitar duties tonight.

The Urban Voodoo Machine have been through so much in the last year and it remains a bittersweet pleasure to be here tonight to celebrate their continued existence with them.