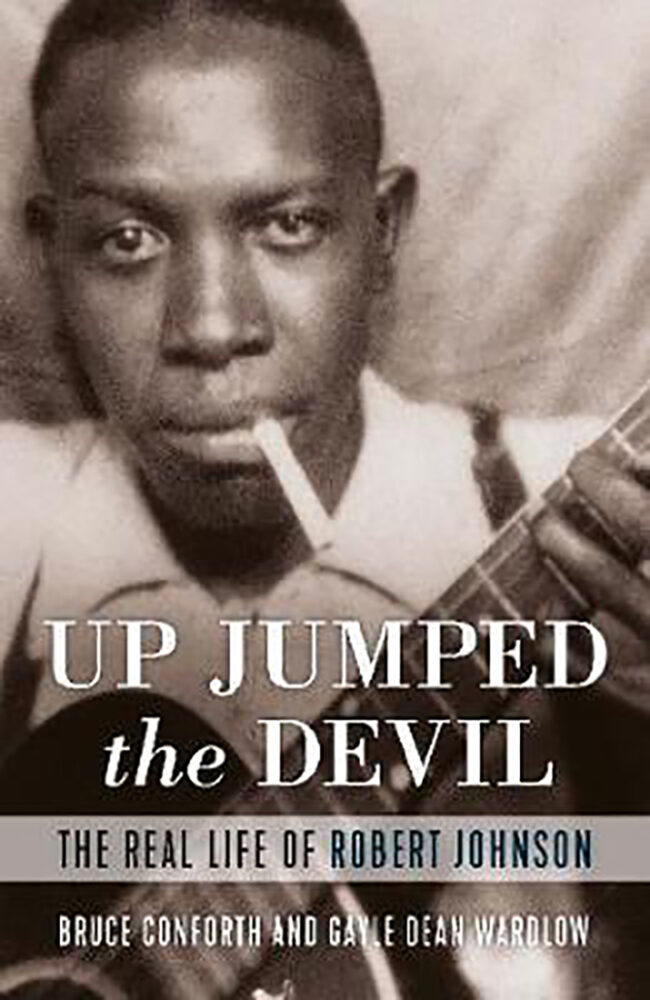 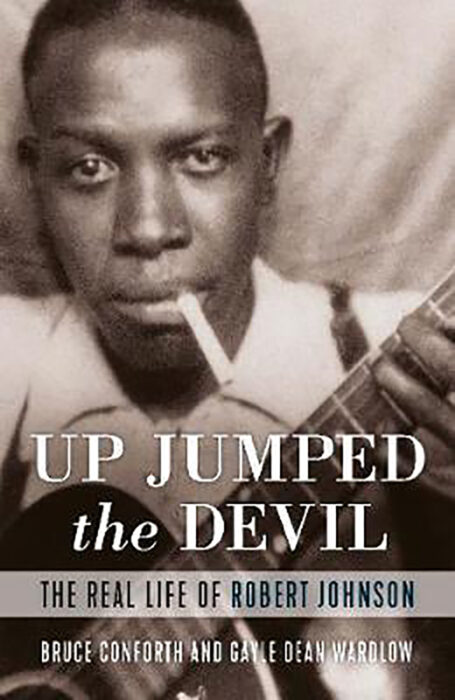 Up Jumped the Devil: The Real Life of Robert Johnson – Bruce Conforth and Gayle Dean Wardlow

Spoiler alert: Robert Johnson did not sell his soul to the devil. Despite that, his story makes for essential reading and here it is brilliantly told by Bruce Conforth and Gayle Dean Wardlow. Gordon Rutherford grabs his diddley bow, heads on down to the juke joint, and reviews for Louder Than War.

The myth surrounding Robert Johnson has to be one of the most famous, and most intriguing, in music history. It’s allegedly a real-life version of literary fantasy. A horror story made true.
The premise has motivated many great works of art, most notably Christopher Marlowe’s Tragical History of Doctor Faustus. Hell, it even inspired yours truly to write a novel called Midnight at the Old Aces.

In the unlikely event that you don’t know what I’m on about, the allegory goes that Robert Johnson was a mediocre, down-on-his luck, blues musician, until he made a pact with Beelzebub himself, selling his soul in exchange for unrivalled musical prowess. Tragically, this bargain led to his death at only twenty-seven years old.

As Conforth and Wardlow point out, virtually nothing was known about the life of Robert Johnson before Samuel Charters’ book, The Country Blues, was published in 1959. Storytelling filled the vacuum of truth and Charters’ book, and many others that followed, inadvertently fuelled the myth. The truth, as told here in Up Jumped the Devil may well be less titillating, but we should be thankful for the rigour of the authors of this quasi-academic tome in bringing long overdue factual exactitude.

The lengths the authors have gone to in their quest for absolute accuracy is quite phenomenal. As Bruce Conforth describes it “we wanted to give Robert his life back”. My God, haven’t they just. Together, they spent more than fifty years “researching, writing, rewriting, discussing, listening, travelling and every other type of human endeavour” in order to tell this story. Indeed, as part of that research, it was Wardlow himself who found Johnson’s death certificate in 1968 after it had been presumed missing for decades.

Unsurprisingly then, Up Jumped the Devil brings incredible insight into Johnson’s life, from birth until death, much of this gleaned through conducting hundreds of interviews with childhood friends, family members and fellow blues musicians of the day who knew and worked with Johnson. This latter group includes people like Son House, Johnny Shines, Robert Lockwood and Harry Townsend. Augmenting this in helping us to build up a comprehensive and accurate picture of Johnson’s life are some fantastic photographs of the time along with copies of official documents and census records. These all combine to paint a very vivid picture of the man.

One of the most wonderful things about Conforth and Wardlow’s book is that you don’t need to be a massive blues hound to find it interesting. Everyone should know that the music that emerged from the Delta in that period shaped so much of what came after. Would we have had the Rolling Stones or Led Zeppelin or Elvis without the likes of Robert Johnson? This is critical.

Therefore, Up Jumped the Devil is noteworthy from the perspective of musical history. Let’s face it, Robert Johnson matters in the same way that Charlie Parker matters. In the 1930s, John Henry Hammond II eschewed his privileged background to become a leading authority on black culture and music. A producer for Columbia and a respected critic, Hammond was reputed to have a great eye and ear for talent. So, when he stated that Johnson made Leadbelly “sound like an accomplished poseur”, it’s worth taking notice.

It is evident from much of the narrative that Johnson was an extremely gifted musician. According to interviews with some of his peers, he would often sit and play with his back to other guitarists so that they couldn’t copy his technique and unconventional tunings. But this ability didn’t come from a deal with the devil. Conforth and Wardlow frequently stress just how hard Johnson worked on his guitar playing to become so widely known throughout the Delta’s jukes. His devotion to learning his craft came with a price. Young Johnson endured many a beating at the hands of his stepfather who would have preferred him to focus on picking cotton rather than messing about with that ‘devil’s instrument’.

But it’s also fascinating from another perspective. Up Jumped the Devil really comes alive as a sociology piece, detailing how the citizens of the Deep South lived, their motivations, fears and desires. Life was transient, with families moving from plantation to plantation in their quest to earn a dime. And it was brutish, violent and cruel. This aspect, actually more than the music, really came alive for me and that’s what brought Robert Johnson to life in my head.

As a footnote to that theme, it is also interesting to note that many of the small towns that Johnson lived and worked in no longer exist, save for a derelict shotgun shack or nickel and dime store.

If I have one criticism of the book, it is that in seeking absolute accuracy and truth, the authors have sacrificed a little bit of the human aspect of what is essentially a tragic tale. Johnson’s life is laid out starkly on the slab, awaiting us to dissect it in the post mortem. Yes, it puts the record straight like no other book. But it does so at the expense of warmth.

That aside, it’s an important read that covers the previously little-known life of an important artist from an important time. By reading it we can learn so much about what came afterwards.

And in these times of snowflakes complaining on social media about the travails they face when their broadband signal slows down or their cappuccino isn’t quite hot enough, it also serves to remind us what true hardship really is.