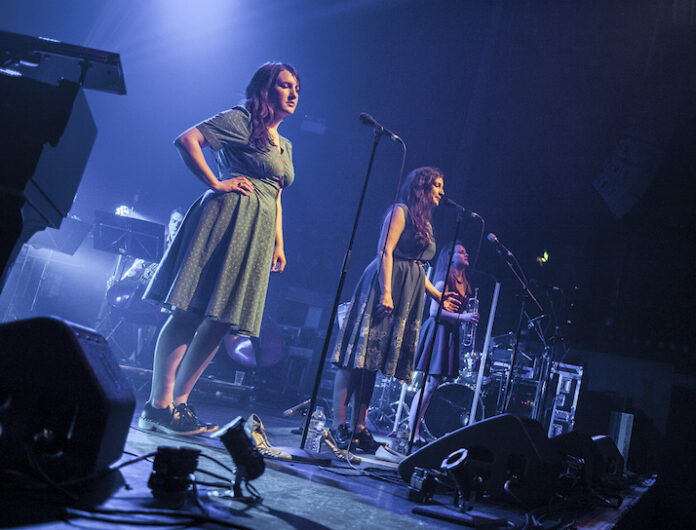 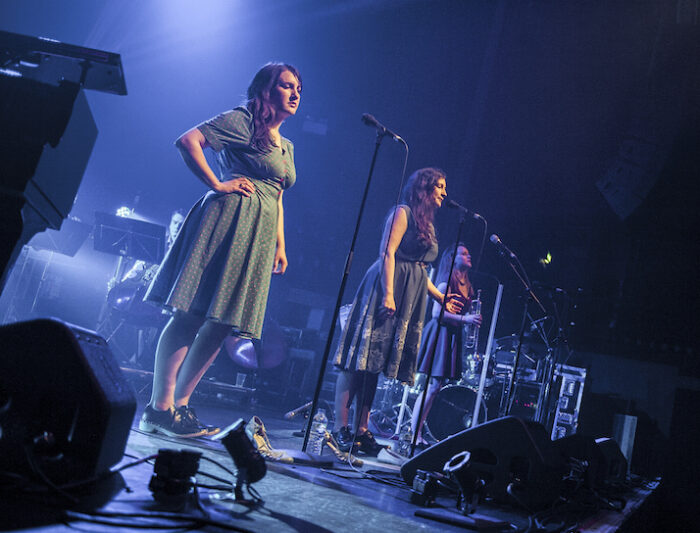 Photo of The Unthanks above © Michael Ainscoe.

The Unthanks | The Young’Uns

Forward thinking folk duo The Unthanks have been on tour recently supporting Mount The Air, a set of songs that some of us at Louder Than War consider to be the best album of 2015 thus far. Dom Walsh (words) and Michael Ainscoe (photos) caught them in Manchester and their combined review follows…

The Unthanks have already staked their claim to top the end of year list polls with their latest opus; Mount The Air. Its sweeping orchestral beauty mixed with plenty of jazzy licks and somber and melancholic content is an amazing piece to behold. The chance to hear it played live with a ten piece band made for a scintillating prospect. 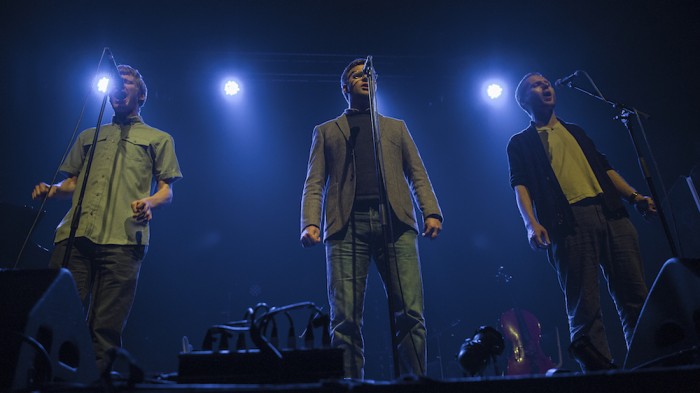 Photo of The Young’Uns above © Michael Ainscoe.

First up though, was Teeside trio, The Young’Uns. Sean Cooney, David Eagle and Michael Hughes have grown immeasurably as a band over the past few years. They’re now in their eleventh year together and by scoring a support slot with The Unthanks, being nominated for BBC Radio 2’s folk awards in the best band category and with another album ready to drop, they’re displaying just why they have turned so many heads in the folk world. The first of many interpretations of other people’s songs kicked off their set in the form of Billy Bragg’s Between The Wars, which they’ve also recorded for their new album; Another Man’s Ground. Another new track, Private Hughes, showed their knack for a real tug on the heartstrings with an ultimately joyous tale of a love lost and found in World War One. John Cherokee saw the band unite the steadily amassing crowd with plenty of crowd participation. Whenever you read about The Young’Uns you hear words such as wit, charm and great harmonies; all this is completely true, but after seeing them numerous times now I can attest that no show is ever the same. The camaraderie with each other is unparalleled and the performances of songs keep evolving and getting stronger.

With The Young’Uns more raucous and unaccompanied turn in warming the crowd, The Unthanks took to the stage complete with a ten piece band … and clogs. Mount The Air’s title track was aired early on in the set. If you have heard the song you will know how lavish it sounds on record; to hear it live was a complete delight. The sweeping and soaring orchestration sounded simply sublime. The ending of the song was accompanied by Rachel and Becky showing off their clog dancing skills to add to the crescendo of an amazing song. 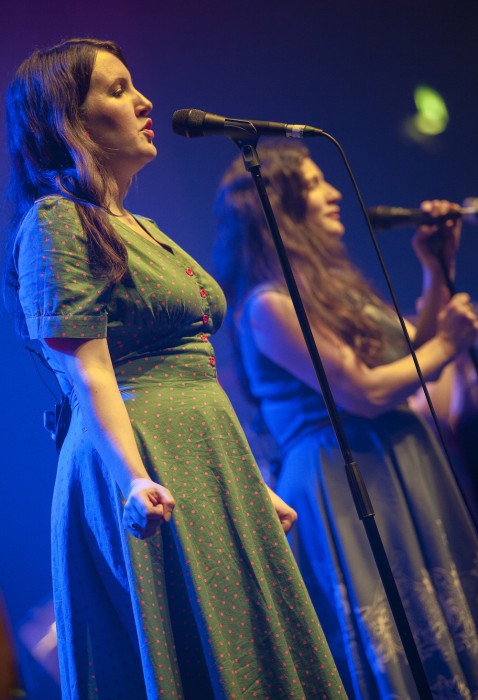 Most of the setlist was composed of The Unthank’s latest album. Last Lullaby stripped back the full on orchestration, with solo violins and the piano taking centre stage before its uplifting and joyous finale. Another new cut, Flutter, has recently been play-listed on BBC 6 Music. Its live incarnation sounds inherently dark and sinister. Again, the orchestration is epic, but the drumming on the track is complex; the band’s delivery of the song is perfect. Also from Mount The Air, Magpie also showcased a darker side to their repertoire. Magpie really allows the two sisters’ different voices to come together to showcase both their varying styles.

Along with many of their own compositions, The Unthanks do enjoy playing other people’s songs. Rob Wyatt’s up-tempo Out of the Blue is aired, along with an excellent version of King Crimson’s Starless. A nod to Graeme Miles is also included. As the band returned to the stage for an encore, there was a reprise of Mount The Air before a truly beautiful version of Last, from the album of the same name.

The Unthanks are a band that have true crossover appeal. They have staunch support on the folk camp, but their willingness to embrace different genre’s sees them gaining support from plenty of mainstream areas. The audience in attendance in Manchester, and throughout the tour, will have been treated to a band in all their grandeur and pomp. Throughout their arrangements sounded remarkable, and the girls’ voices traverse immaculately throughout.

An all round great night with two of British folk’s finest bands.

All phtos by Mike Ainscoe. You can find more of Mike’s photography and writing on Louder Than War at his author’s archive and his website is here: michaelainscoephotography.co.uk.