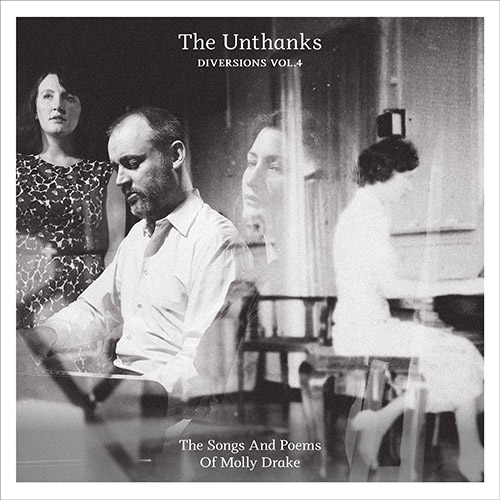 The Unthanks: Diversions Vol. 4 The Songs & Poems Of Molly Drake

The Unthanks delve into the  treasure box that is the song collection of Molly Drake to produce what’s described as their most difficult and possibly best work.

Over the last decade, The Unthanks have established themselves with a reputation as musical groundbreakers in the folk genre as well as being innovative interpreters of traditional song.

Following on from the award winning Mount The Air comes the latest in their Diversions series. It’s a set of projects which has seen them covering songs of the shipyards, the work of Robert Wyatt and working particularly effectively with the Brighouse & Rastrick Brass Band. Their latest undertaking sees them respectfully scrutinising the catalogue  of songs and poems of Molly Drake, mother to actress Gabrielle and fabled musician Nick.

Put simply, they’ve taken her simple home recordings from the 1950s and turned them into something unprecedentedly unique. Extreme in their precision in undertaking their  exploration of the Drake legacy, essentially what was intended as no more than Molly Drake’s  self motivated hobby has evolved into another example of The Unthanks  unerring realisation.

The experience is infused with a feeling of  entering a private world; eavesdropping on the music from an open window that comes courtesy of What Can A Song Do To You? the opening scene setter that represents the collection perfectly. The combination of song and spoken word – like the album – amusing, reflective and wistful, the lightness occasionally subdued by the onset of shadows.

The blend of The Unthanks musical interpretations and Gabrielle Drake’s readings and the contrast of Gabrielle’s formal yet warm qualities and Rachel and Becky’s north eastern regional brogue provide a loose theme.  Martha and The Shell are cameo moments for Gabrielle’s  recitals and whilst some songs remain faithful, others have travelled some way from the original. The  joy in seeking out those originals, the thrill of the chase,  becomes  part of the extended journey.

Adding their interpretation to a couple of unrecorded gems, passed on orally by Gabrielle,   allows The Unthanks to apply a fresh coat to Bird In The Blue and Soft Shell Crabs, yt they remain in keeping with the album theme of understated splendour. The First Day delivers a soothing extended coda; an expression of hope and optimism in “destiny do your worst” and leaves the final words to Molly through Gabrielle – almost an epitaph.

Developing the songs into an audio visual performance (the Louder live review here) has been the natural and obvious progression and simply provides fuel for pianist/arranger/producer Adrian McNally’s “our most rewarding Diversion so far perhaps” whilst  also acknowledging the quality of the source material. To revisit  the question – what can music do for you? Touching, exquisite and entrancing are totally appropriate terms to cast upon a diversion of such quality. A venture that illustrates perfectly how music can innovate and  captivate – the whole experience realises The Unthanks  on this form become  The Untouchables. Now for the speculation on what direction their next diversion will be.

You can watch the official video trailer for Diversions Vol.4  here:

You can also listen in on Soundcloud