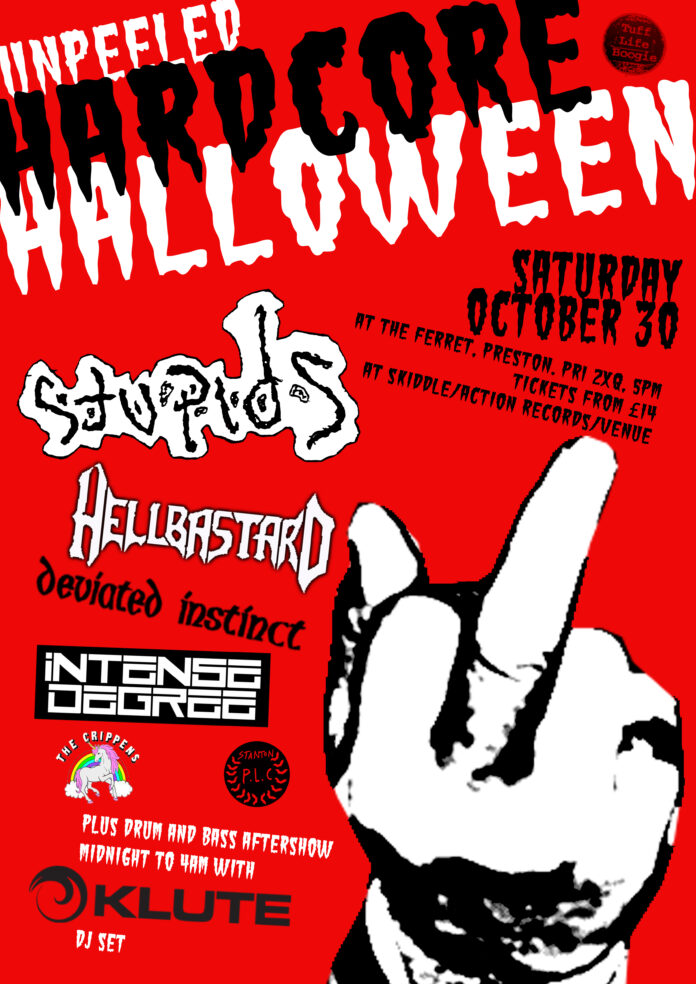 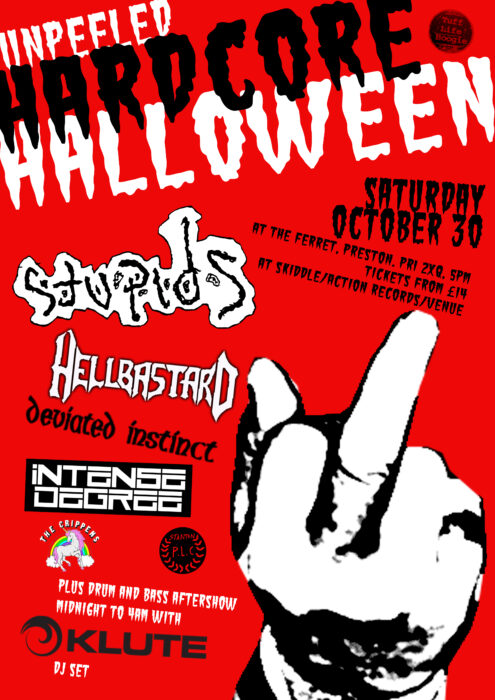 Tuff Life Boogie promotions present the latest of their Unpeeled nights to remember John Peel and put on a great night of music to boot.

The focus of this night is the UK Hardcore Holocaust era of 1987/88 with a line up of The Stupids, Hellbastard, Deviated Instinct and The Crippens (aka Dr and The Crippens). Sadly Intense Degree have had  to pull out.

Hardcore Halloween runs from 5.00pm to 11.30pm at the Ferret in Preston and is followed by a drum and bass aftershow featuring a DJ set from Klute, midnight to 3am

Tickets available from Action Records Preston, The Ferret and online from Skiddle.com

In the mid 80s, John Peel’s relentless quest for the cutting edge led him to champion the emerging British acts who were putting their own spin on US hardcore and thrash metal, mixing it with anarcho punk to produce something new. UnPeeled is proud present a ridiculously good line-up comprising 4 of the best grindcore/extreme metal/hardcore acts from this period

The Stupids were moronic East Anglian teens, into American Hardcore, Sesame Street, pizza and trying not to suck. Described by John Peel as “highly diverting, playing hard and fast with commendable brevity and lack of attention to detail”, The Stupids ripped thru the mid to late 80s, recording 4 Peel sessions (including one as Frankfurter, their fast food obsessed alter egos) before the wheels came off their skateboards at the end of the decade. The second Stupids John Peel session, from May 1987, was so good it was released as a 12” single on Peel’s manager’s label Strange Fruit.

The Stupids appearance in Preston will be a truly seismic event and you should not miss it!

Hellbastard
Whilst Napalm Death were developing grindcore in the Midlands, Hellbastard were experimenting with anarcho punk and thrash metal in Gateshead and ended up inadvertently birthing the crust punk genre, which was named after Hellbastard’s magnificent 1986 demo ‘Ripper Crust.’ Maximum Rock’n’ Roll accurately described their sound as “Metallica meets Crass meets Slayer.” In the next couple of years Hellbastard recorded for both the esteemed Peaceville and Earache labels and were also lauded by John Peel, although they never managed to record a session (due to singer/guitarist Scruff not being able to afford a phone). Whilst playing a track from their first LP, ‘Heading for Eternal Darkness’, Peel famously commented “I now tell my children, if they don’t brush their teeth, I’ll invite Hellbastard round for tea.”

This will be Hellbastard’s first show anywhere since 2018 and you should not miss it!

Deviated Instinct formed in Norwich in 1984 and are one of the pioneers of crust punk and extreme metal and also birthed the sub-genre, ‘stench’ with their impressively-titled ‘Terminal Filth Stenchcore’ cassette in 1987. After two cassette releases they were snapped up by the brand-leading Peaceville label and unleashed their debut LP ‘Rock n Roll Conformity’ in 1988. Based in East Anglia, home of Peel Acres, it was only a matter of time before Deviated Instinct attracted the attention of John Peel. Peelie duly requested a session from the band in Spring 1990, remarking on air that they were “the toast of Norwich, at least if Norwich knows what’s good for it.”  Tuff Life Boogie is stoked to bring them back to Preston for Hardcore Holocaust UnPeeled!

Dr and the Crippens were Lancaster’s contribution to the late 80s hardcore boom in the UK, and ended up being one of the most notable bands on the scene, feted for their on stage costumes, props (such as the infamous exploding head) and antics as well as the music.
Their music was good enough to secure them 2 Peel sessions though and their second album Raphanadosis was a hit everywhere, with or without the stage show.
The band reformed a couple of years ago with 3 original members, and a shorter name (now just ‘The Crippens’) but have done few gigs so far due to the COVID shutdown. Tuff Life Boogie is made up to have them at Un-Peeled.

There will also be a separately-ticketed aftershow featuring a DJ set from Tommy Stupid’s drum and bass alter ego Klute. Klute recorded a John Peel session and the last record Peel played on air was a Klute track, ‘Time 4 Change.

Promotional feature by Ged Babey for LTW – all content from TLB facebook page as he’s all covided-up.