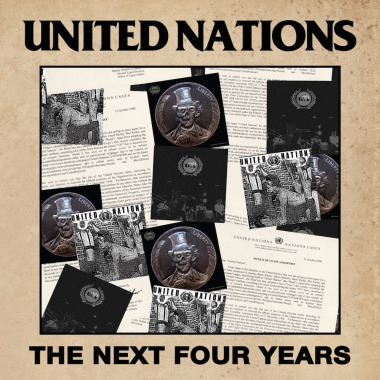 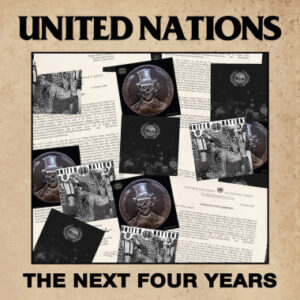 United Nations may or may not be a band that featured members of some of my favourite acts ever. To hear that there was a group out there that featured musicians from Thursday, Glassjaw, and Converge sounds like something that could change the face of the post-hardcore world forever. This, paired with the controversy surrounding their name and the use of the UN logo on their début release, gave hope that perhaps music had not become a weak solution of cordial diluted by too much water that was out only to please magazines and sell records. That there were still bands out there willing to “fuck the man”, and willing to do so to the point where the largest intergovernmental organisation were calling for their heads, no doubt excited many bored with the current musical climate.

So in terms of history, attitude, and the people involved with the project (many of who had to play anonymous due to contracts with other labels), United Nations sounds like a very interesting project. It’s just a damn shame that the music is a bit of a let down. Their latest album The Next Four Years (a play on the old Black Flag record) sounds less like a groundbreaking musical project and more like a very poor high-school grindcore band. For a “supergroup” that has influences and members from bands that didn’t merely tow the line of their respective genres but pushed the boundaries to the point that the damn mould not only broke but exploded into a million pieces, it’s heartbreaking that all the controversy is thwarted by songs that lack any real originality.

It sounds as if it’s aggression merely for aggressions sake. As if the band have sat down and said, “lets make something that’s as noisy as possible” and proceeded to distort the hell of out cliché chord progressions, chucked blast beats into the fray with little to no regard as to where they land, and have it all tied together with vocals so caked in reverb they’re left drowning in the mix with no hope of salvation. And all this seems to have been done in the belief that the sheer brutality of the sound will cast a shadow over how little excitement there is in the actual song writing process.