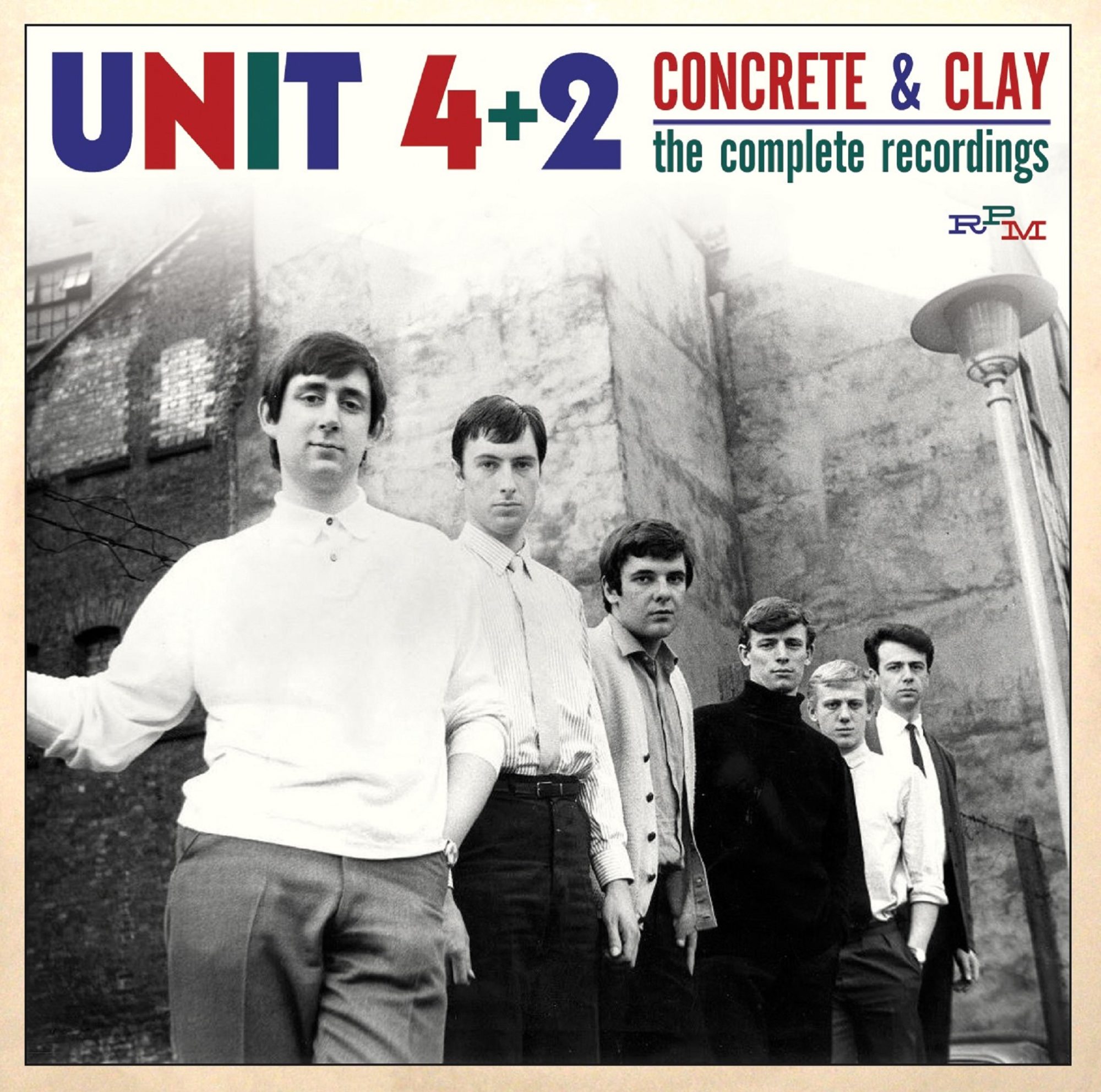 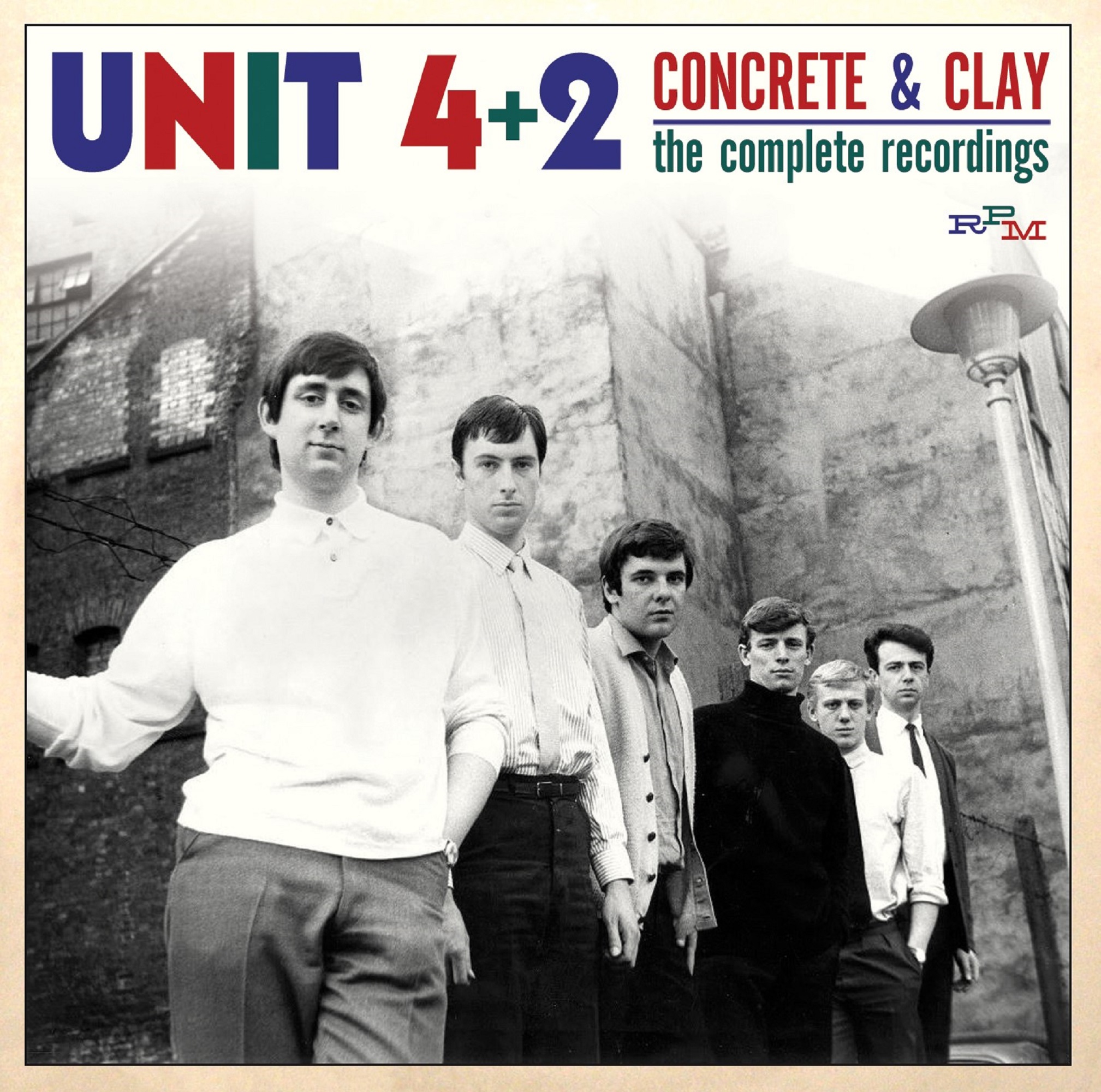 The whole story of the “Concrete And Clay” hit-makers 1960s output……Ian Canty looks the band that struggled under the pressure of following a monster hit…..

Though not strictly speaking one hit wonders, Unit 4 + 2 will be forever primarily associated with their number one “Concrete And Clay” which reached the top of the UK charts in the early months of 1965. The combination of Beat Pop and a pronounced Bossa Nova Latin influence was novel for the time and when put together with the support of the then powerful pirate Radio stations (led by Kenny Everett, then broadcasting offshore on Radio London) resulted in massive success for the six piece, which they never really managed to follow up. Having said that they managed to rack up a number of more than decent singles and gamely kept up with the changing fashions of that turbulent era.

Formed in 1962 by guitarist and songwriter Brian Parker (who dropped out soon to become a song-writing only, “Brian Wilson” type figure), it was a year or so before they recruited the other pivotal figure in Unit 4 + 2’s history, singer Tommy Moeller. Concentrating initially on developing their harmony vocals, they eventually combined this with the Beat sound that was everywhere by the time they made their debut with “The Green Fields” single early in 1964. Slightly unusual in that it strongly featured a banjo, it glanced the Top 50 to give the band its first taste of the charts. After a flop with the gentle ballad “Sorrow And Pain” came the big hit. Even as “Concrete And Clay” dominated the chart though, it seemed that Unit 4 + 2 sounded a little passe in their approach – not the cutting edge but perfectly good, if a tad middle of the road, pop. Beat was coming to the end of its run and as 1965 went on time was ripe for a change.

The first half of this collection mops up everything from their first two years, singles, EP tracks and their generically titled “1st Album”. They turned their hands to Soul (the follow up to their biggie “(You’ve) Never Been In Love Like This Before”, the upbeat pace having more than a little feel of the dancefloor to it) and there is evidence of their Rock ‘n’ Roll roots on covers of “La Bamba” and “The Girl From New York City”. “Woman From Liberia” even has a hint of Lonnie Doneghan in there, “Cross A Million Mountains” tips a hat to the Folk Rock of the Byrds and they occasionally played things for comic effect (“To Be Redeemed” and the Paul Shane-esque(!) version of “You’ve Lost That Loving Feeling”). Overall it is an undemanding but pleasant collection of well-mannered early to mid-60s pop, possibly the Beat forerunner to Pop-Sike, i.e. taking a “happening” sound and manipulating it into a seven inch pop single format that strips away the more “way out” elements, but keeps the fashionable sheen. Also, happily a lot of the tracks here are self-penned revealing a sharp song crafting talent and though there are a few covers in there they patently didn’t have to rely on them as many bands of their ilk did.

Clearly by the time 1966 arrived this was not quite enough however. An early indication of this was when the band’s fifth single, a near carbon copy of “Concrete And Clay” called “Hark” disappeared without trace. To their immense credit (and in the midst of sweeping line up changes, when among many others future hit songwriter and Argent member Russ Ballard came aboard), they battled on and moved their sound with the times, hoping for another smash that would re-launch them as a force in the charts. This makes up the tracks on the second half here and is for my money the better part of this compilation, as Unit 4 + 2 worked feverishly to recapture the glory of their early years by using all their considerable talents in that ultimately fruitless search for fame and fortune. But they certainly were successful in turning out a lot of very attractive singles sides in a variety of styles.

After a final, doomed stab at their now trademark “Concrete” sound with “Baby Never Say Goodbye”, the band started to base their modus operandi on something a little more contemporary. “For A Moment” is reflective of the then current Mod Pop and by the time we’ve reached “I Was Only Playing Games” we’re a world away from the Unit 4 + 2 of a year previously, this marvellous trippy concoction with orchestral touches not charting but showing great potential. For some reason the dynamic Freakbeat of “Booby Trap” was hidden away on the b-side to the so-so “Too Fast Too Slow” as it clearly was the better song and would have fitted in the Top 10 of the Spring of 1967 like a glove. A lovely cover of the Bee Gees “Butterfly” followed, which was custom made for the type of harmony vocals they still specialised in, even though they had updated all other aspects of their muse.

The whole of this disc is a constant joy, with the Unit (as they were called briefly on the “Loving Takes A Little Understanding” single) employing a scattershot approach feeding several pop modes of the time through their mincer and overlaying the results with their sweet vocals. They throw in great Mod grooves like “Would You Believe What I Say”, a moody mini-drama “I Will” and a surfeit of brilliant, freewheeling Pop Music (“3:30”, “(Living In) The World Of Broken Hearts”, the frantic stomper “So You Want To Be A Blues Player” etc). Of course the changes of style from single to single may have foxed record buyers at the time, but now gives us a fine view of many aspects of 60s pop in one very appealing package.

It is great to have the many sided approach of Unit 4 + 2 finally available over a complete and thorough collection, with of course a booklet which gives you a full history of the in and outs of the band. In chasing that elusive hit they managed to stitch together an assortment of brilliant pop records that somehow conspired to miss out on the charts, but are as satisfying as most of what the big guns came out with in the timeframe. In the late 60s, Unit 4 + 2 may have seemed an antiquated proposition in the face of trendier outfits like Pink Floyd et al, but they truly were a fine band and well worth your investigation.