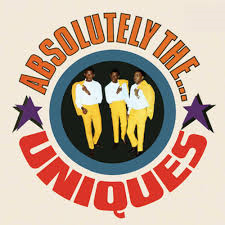 Finally issued for the first time on CD, here is the Uniques 1968 album along with 12 bonus tracks that gives a complete overview of the band’s recordings for the Tramp label….Ian Canty looks at the short but bright career of one of Jamaica’s most talented trios…..

In Jamaica, as the 1960s kicked off, the predominant sound of the island moved away from the imported US R&B towards the more home-grown Ska (and later Rocksteady). During these years vocal trios began to become hugely popular, with the Maytals and Heptones among others racking up hits. The Uniques were formed along similar lines to these outfits and like the Wailers contained three talented individuals who would go onto fame in their own right later on.

Forming a little later on in 1966 when their number included future star Roy Shirley, their most well-known line-up came together came after a few early personnel changes. Slim Smith had been with the band since its formation and he was joined by newcomers Lloyd Charmers and Jimmy Riley. Though this version of the band was only together for little over a year, they clocked up many JA hits commencing with Watch This Sound (actually a re-working of Buffalo Springfield’s protest song For What It’s Worth) for group’s own Tramp label.

After this breakthrough hit they recorded a number of quick-fire singles. This resulted in a steady stream of Jamaican hits and UK big sellers, including covers of the Tams’ Standing In and Curtis Mayfield’s Gypsy Woman. The source material revealed a undoubted love of US Soul, but they also turned out some popular originals such as Speak No Evil and U Yuh as well, in a more typical early Reggae style.

Soon after Absolutely The……Uniques emerged to the record buying public, the band split for solo careers (Jimmy Riley did put together a new version of the band about 10 years later with Reggae star Cornell Campbell joining and Al Campbell beefed the band up to a three piece again in a future reformation in 1997). After leaving the Uniques Slim Smith went onto further successes, but his career was cut tragically short in 1973, when he died after lacerating himself badly whilst trying to gain entry into his parents’ home.

Lloyd Charmers scored with hits and influential tracks like Birth Control (the basis for the Specials Too Much Too Young) but by the mid-70s had moved more into production. His skills in this field resulted in a massive hit for Ken Boothe with Everything I Own, which rose to the UK number one spot in 1974. Later he moved to the UK and played a part in the Lovers Rock boom. He passed away in December 2012. Jimmy Riley, who was the last surviving member of this Uniques line-up, died in March 2016, after a long career that saw success in the Reggae, Roots and Dancehall eras.

This album, original released in the UK on the Trojan label, has been unavailable for many years. The version presented here follows the tracklisting of the US edition originally issued on the Clocktower imprint (the UK and Jamaican releases had the same tracks in a different running order). In truth this was more a round up of their single successes than an album in its own right, but that does not detract from the musical quality contained therein and there is much to enjoy.

The Uniques worked to a fairly simple but successful formula – generally the high, pure voice of Slim Smith taking the lead with Chambers and Riley providing contrasting lower backing vocals, Soul influenced ballads and slightly more up-tempo dancers being their stock in trade. It was a winning combination as they traversed from the Rocksteady era of their early successes through to the dawning of Reggae in the late 60s with ease (and a few stylistic tweaks of course).

My Conversation, a soulful, brooding ballad with a laidback vibe and a simple but ingenious three note piano hook is a joy to hear. Watch This Sound skilfully dances up Stephen Stills’ song with harmony vocals to the fore and the faster pace and cool feel of the Temptations’ You’ll Lose A Precious Love takes the toughness of the coming Reggae rhythm and matches it up with an almost Doo-Wop approach vocally. Speak No Evil is a classic example of early skanking, echo-laden Reggae and Curtis Mayfield’s Gypsy Woman has some pleasing early Dub/Production touches to it. Talking of this, the Federal Studios productions here are sometimes a little on the primitive side with the odd queasy organ sound, but a steady groove is on the whole maintained that gave the Uniques a sound basis to weave their particular magic on.

Onto the bonus tracks. That queasy organ deputises for singing on the instrumental take of Freedom Song (retitled Freedom Sound), but apart from one other “version” (Watch This Sound gets a piano-led re-run as Follow This Sound) these are all vocal cuts. The Uniques even dip their toes into a little bit of Reggae-fied Psych with a groovy effort at Tommy James And The Shondells big US hit Crimson And Clover and again show an adventurous side with the almost straight Rock & Roll/R&B take of Forever. Cooyah seems to be an anti-Rude Boy song, with a rock-solid beat and some great saxophone. If they mostly deliver quality Rocksteady/Reggae love songs like the touching Love And Devotion they do show a little street tough rudeness on the cheeky Mr Rhya!

This is another strong collection from Doctor Bird bringing together a rare album and associated singles by a band who didn’t last long, but carved out a huge reputation in their home country and made waves further afield in the UK and US. Despite its rather piecemeal construction, Absolutely The……Uniques is a landmark recording that bridged the gap between Rocksteady and Reggae and has been unavailable for far too long. The bonus tracks demonstrate how much more they had to offer and gives a few pointers to how they could have developed, if they hung around a little longer. The Uniques obvious vocal talents and Soul leanings were mostly perfectly matched to their material and the infectiousness, energy and craft of the band shines bright all these years on.