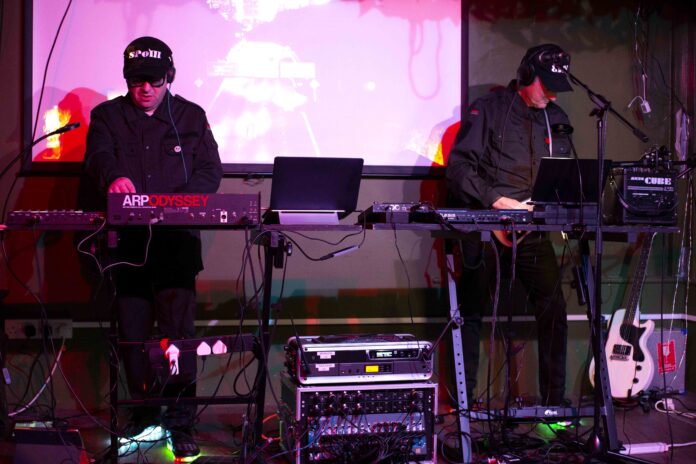 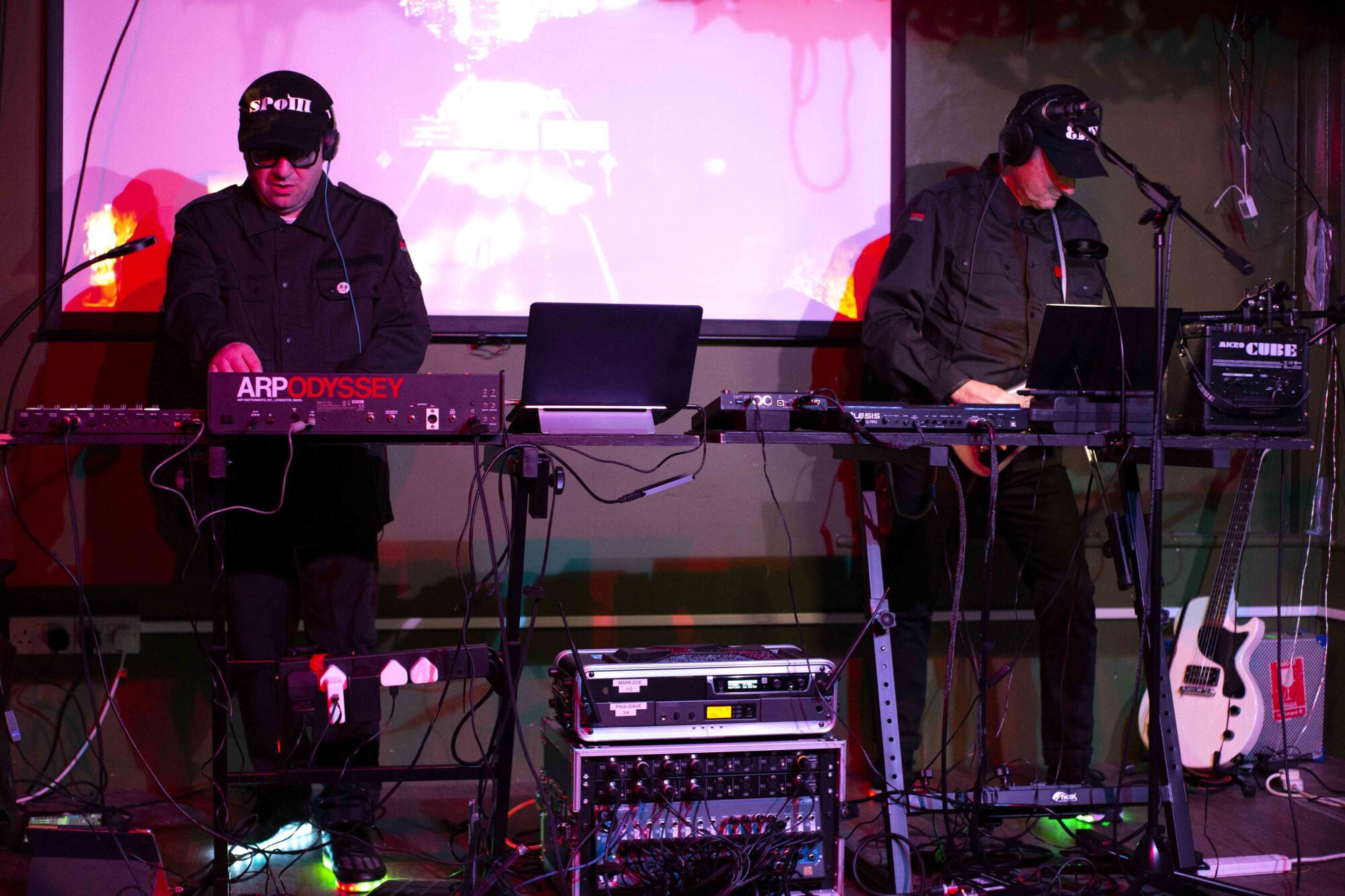 Mark Radcliffe and his sidekick Paul roll into town with the wonderful UNE and they’ve brought along the weird and wonderful Paddy Steer, closely followed by LTW tipped The Dirt. Wayne AF Carey spends a strange Sunday afternoon to check out a not normal line up of exciting talent.

The first thing that strikes me about this whole event is the fact that the promoter Steve Noon can’t attend as he’s Covid positive, which is a bummer as he’s been so looking forward to this for a while. I’m sure he’ll be around in spirit somewhere close by – UNE are no strangers to Northwich, with Radcliffe living in the close proximity of Knutsford and it’s a great way to spend a Sunday afternoon in a tiny venue, creating some kind of mini rave up for the kids and the bigger kids. So let me fill you in with the party atmosphere. 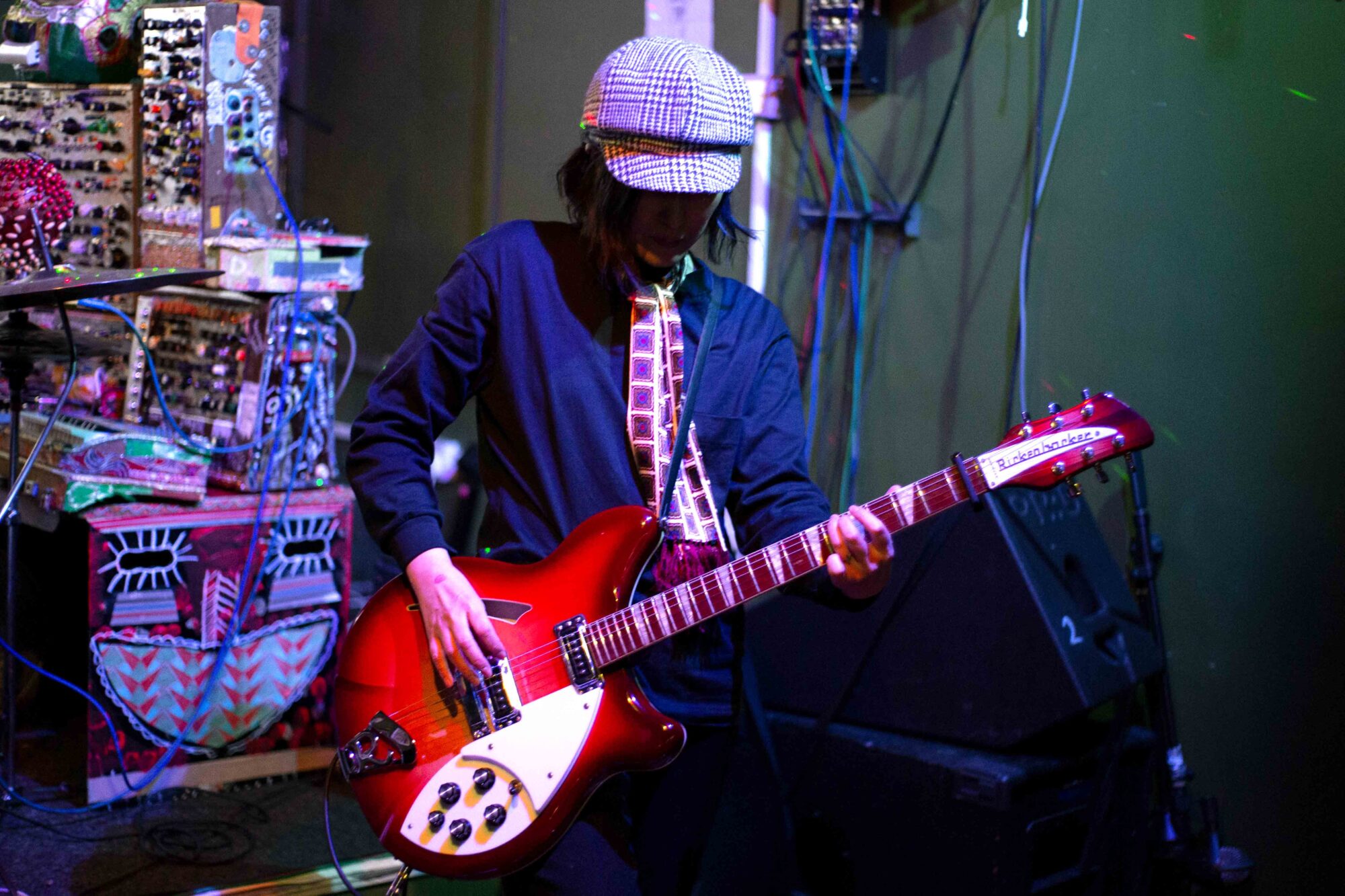 First band on the bill are only on their second gig and they already sound a promising prospect as one of my ‘ones to watch tip’ for this year. Needing no introduction is frontman Jack AKA Leon The Pig Farmer, who has been treading the mean streets of Greater Manchester for some time with his incendiary off the cuff spoken word that I have often quoted is ready to steal the crown from John Cooper Clarke. Teaming up with his wife Sachiko is a bold statement when you see the board of effects pedals laid in front of you, that she skillfully works around to bring a sonic platter of psych drone, that washes over the audience. They sift through most of the debut EP and you get lost in the repetitive squall of effects and Jack’s thoughtful wordplay that has you mesmerised, especially on tracks like Wiccan Transition and the trance like Dream State. The John Hall inspired Astral Elevator sounds powerful as fuck in this tiny venue. MBV, Suicide and Spiritualized wrapped in a sweet bag of candy. 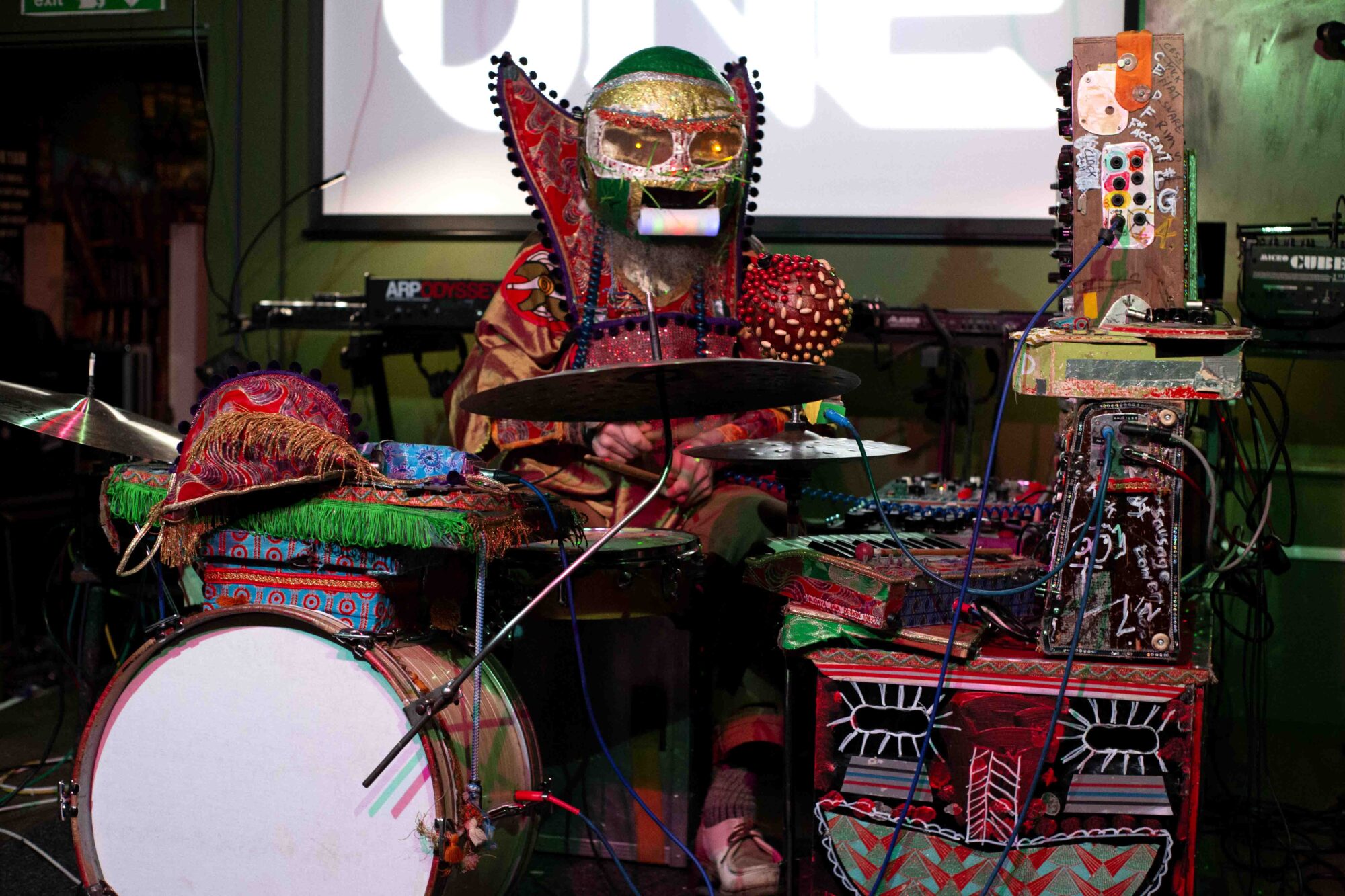 Paddy Steer has been beamed onto this planet to make you party and grin like a maniac. I last saw him at Night N Day and I swear I’ve never seen so many people smile in one place! It’s like watching an improvised jamming session about to fall apart, yet you know he’s a lot more clued up than you think. His eyes are on every bit of his equipment and he keeps the drums flowing whilst twiddling all his amassed equipment, producing bleeps and tweaks all over the shop, swapping headgear from a Gandalf like figure to a lit up space alien, trying not to knock over the gear in his frenetic pace, with his octopus arms that seem to be everywhere. There’s even an audience outside The Salty Dog peering through the windows to see the wonders of what’s happening to the lucky people in here. At one point Paddy stops and says “Is my time up now?” Someone shouts “You’ve got another two hours!” then everyone joins in! I described it as Prog Psych Wonk at one point, but now I can add Space Techno to that, considering the amount of 808 trickery and vocoder vocals in the mix. An act you will never ever get bored with. He’s that good. 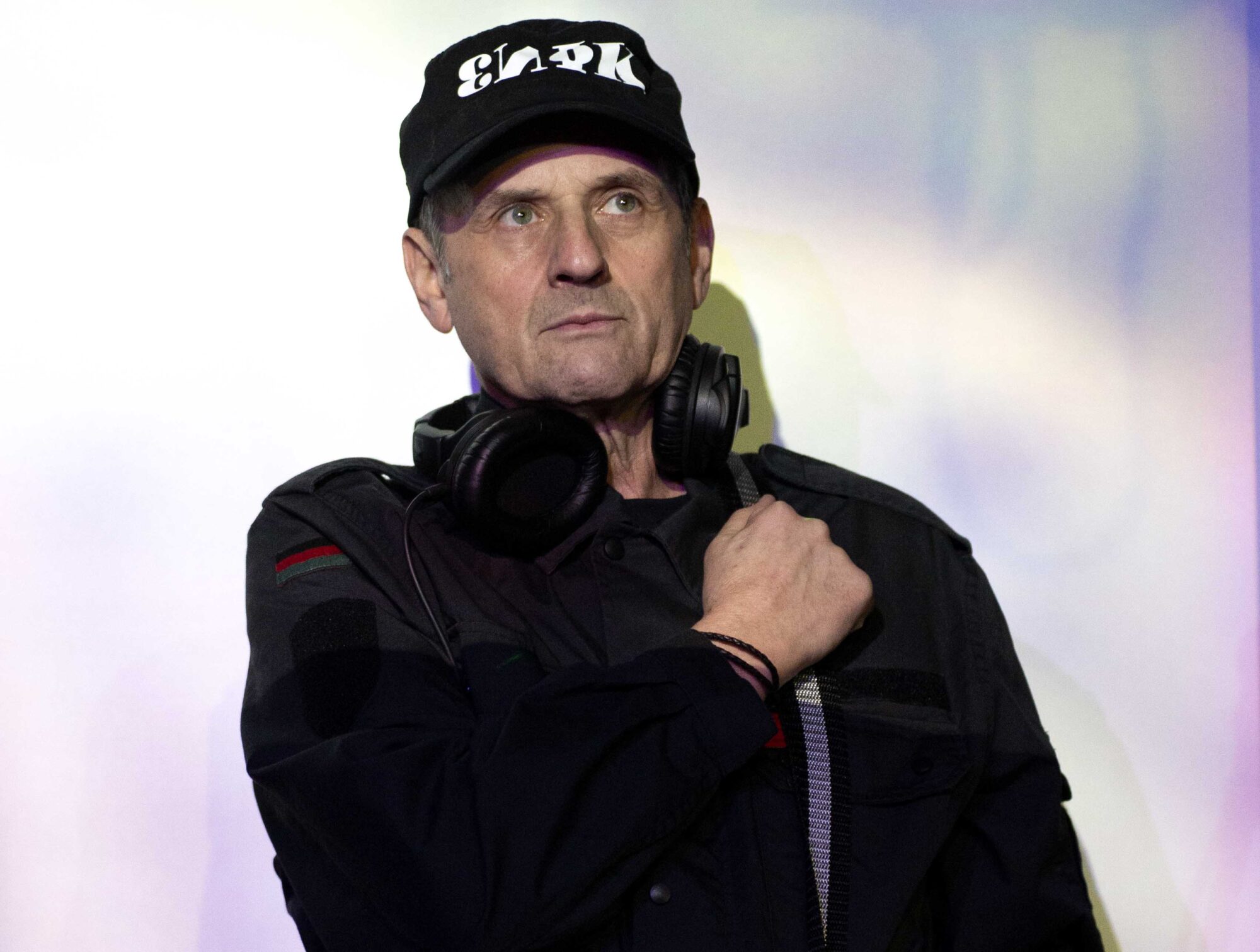 I’m walking from backstage after interviewing Paddy earlier on and I bump into Mark Radcliffe at the side of the stage proclaiming “have my trainers charged up yet?” I shit you not, he charging his fuckin’ trainers. Those flashing ones you see the youth of today wearing. Anyone who’s old enough knows that he’s always been the comedian and people of our age will never grow up. It’s healthy! Three albums in now (I’ve only heard two) and they are a cracking band to watch. In earlier reviews, I’ve always said that I can’t decide whether they are taking the piss or being serious. I’ve changed my mind. This is well planned stuff that has hints of lots of different genres and some clever wordplay that name drops quotes, films and bands throughout. They kick off with the disco techno of Folie from the latest album Deux, which makes us all happy from the start. It’s quite a set-up they’ve got going on, including the backdrop of a projector with some great images, that keep you captivated. A driving song if I’ve ever heard one. Waldeinsamkeit from second album Lost sounds fuckin’ brilliant with the tongue in cheek references (you count them!). It’s a hark back to Kraftwerk, yet sounds of our times and Mark and Paul bounce along, twiddle their knobs and look like they’re having a laugh. If this is a hobby it’s one I’d like to have a look at. The in-between banter is funny as fuck, especially when he proclaims “that Novax Djokovic, what a twat” after offering to pay his fee to fuck him back off to Serbia. An excellent cover of Space Odyssey, as a nod to the Bowie celebrations, is closely followed by the excellent Ultraglitch, which is an ironic close cousin when you check the lyrics and has obvious Floyd influences. This is followed by a slowed down version of OMD’s classic Electricity, which goes down well and the audience are partying like it’s a New Wave reunion. Mark introduces his bandmate Paul, to the shout of “Who are ya?” by a few boisterous wind up merchants. The reply? “I’ve just told you, he’s called Paul, are you thick or what?” A spit your beer out moment. My highlight is the excellent Itsuarpok, a proper techno banger that featured on a charity compilation album before lockdown. Full of 808’s and guitar licks that make you want to boogaloo. The set ends with the countrified Devilled from the latest album which goes down excellent and it’s a pity the aforementioned JCC couldn’t have been here for his spoken word part on the track.

An excellent gig, that made me smile throughout, no moody shit, just a full-on party experience that opened peoples eyes to the myriad sounds from The Dirt, Paddy Steer and UNE. A nice start to 2022.

Photos by Hels Millington, author profile is here – you can find Hels photography at Facebook