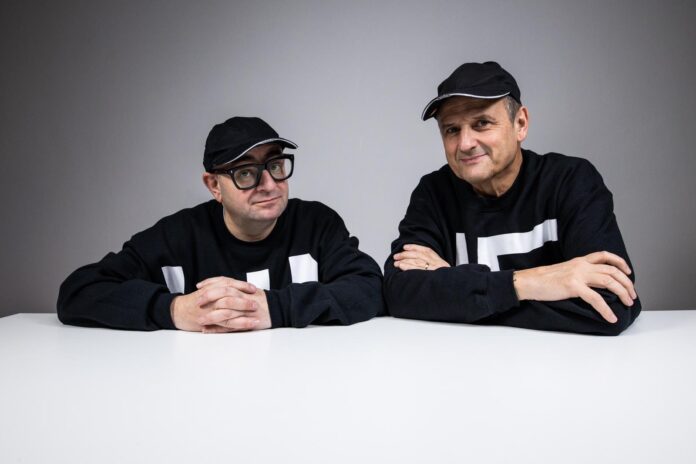 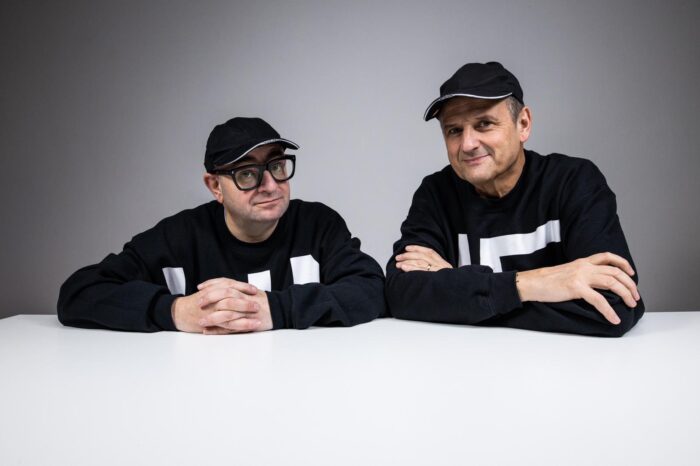 The first time I heard UNE was a track off the charity compilation album MancMade which made me sit up and take notice. A techno banger with comedic lyrics which made me think, is Mark Radcliffe taking the piss or being serious? I checked out first album Lost and the latest album Deux and made the decision that these guys are actually serious. A nice collection of electronica with hints of Pink Floyd, Kraftwerk and even The Pet Shop Boys with some club bangers sprinkled in the mix. You should all know Mark Radcliffe, yet Paul Langley is the understated brother of Hacienda / Sankeys Soap resident DJ Bobby Langley, and in his own right creates some great electronica as I witnessed live not long ago (reviewed here) and is the perfect partnership for the wit of Radcliffe. I asked both of them to each reveal their top five influential albums…

“A groundbreaking classic of minimalist systems music and electronic sound. Californian
Riley is still with us, in his eighties now, and amazingly this left field record came out on a
mainstream label CBS. Its hypnotic repetition of lightning fast note clusters overlaid with
shifting metamorphoses is almost transcendental.”

“This band was named after the Terry Riley masterpiece. They were a strange but beguiling
blend of prog and pop and scored a major hit with ‘Back Street Luv’ off this album. I hear it
and I’m thirteen again. Sonja Kristina’s ethereal voice is centre stage with Frances
Monkman’s bubbling synths on one side and Daryl Way’s dramatic, slashing electric violin
on the other. They managed to pull off that really difficult trick of making something sound
innovative and strange and yet hummable too.”

“An intoxicating mix of oddly beautiful songs and affecting ambient soundtracks. There’s a
deeply beguiling, almost enveloping feeling about this record which engenders a deep
sense of calm. I guess with UNE we’re trying, and mostly failing, to get close to that.
Songs that have melodies but which also drift away into other worldliness”

“Like the Eno this album contains heartbreakingly gorgeous tunes but the whole thing
seems like music from another world. It seems to exist in entirely its own space and time.
Mark Hollis and co apparently sent themselves half-mad working for months on end in a
darkened studio on the same six songs. Evidently dozens of different musicians were
asked to improvise over the skeletal song structures and many of them didn’t appear on
the final album. It must have been like trying to complete a massive jigsaw with no picture
to follow. It sounds like nothing else before or since.”

The guv’nors of course. Their acknowledged masterpieces, of which Paul has picked one,
come later but I love the minimalist starkness of this. This was the key influence on our last album ‘Spomenik’. I loved the uncompromising coldness of it. It’s something about the
blend of primitive beats and bleepings coupled with their timeless sense of melody.
Possibly as brutalist, in architectural terms, as pop music has ever been. All these albums
achieve what UNE are striving towards. Melodic pop music but with the whiff of alien
intervention.

“Ahhhh, the first album I ever bought when it came out, I know it word for word and note for note. Replicas opened the electronic door for me, the cold voice, the iconic MiniMoog sounds (I think ‘Are ‘Friends’ Electric’ was my first ‘air keyboard’ riff) plus the brilliant syncopated drumming of Jess Lidyard, it’s still is my go to album for inspiration, I should thank my mum for upping my pocket money for a couple of weeks allowing to buy this!”

“The Model (track 3), got me my first DJ job… Lunch time gig at my school in Chadderton! I know, springboard for well, more school discos! 36 minutes of pure electronic genius. When I write our drum tracks, I always play this album and try to get that Spacelab sound! Essential listening!”

“Considering this album is 53 years old (my age!) from NY, it blew my mind away when I first heard of Silver Apples. The opening track, Oscillations, from their self-titled album, is truly a work of genius, you can pick out the pre-drum and bass vibe going on further in to the album. If the Chemical Brothers, Roni Size and Aphex Twin dads were making music… THIS… “

“For me, this is definitive Smith/Emerson/Hyde, big drums, ace melodies, heavy bass lines, King of Snake being a fine example, this album really gets you in the mood to hit the studio and spend all night working on big tracks. Grandmaster (from our album Deux) was a direct result of said all-nighter.. Pure brilliance..”

“Hip Hop has always been close to my heart, especially cut and paste, Joshua (Davis), as his mum likes to call him, is a latter day pioneer of this version of hip hop, very clever, beat laden and heavy on the samples, Organ Donor and The Number Song (check the Moroder sample) are classic pieces of work.”