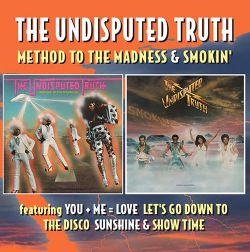 The Undisputed Truth : Method To The Madness and Smokin’

‘The Funkiest Band of All-Time’ two albums from 1976 and 1979 on one CD by the Psych-Funk legends reviewed by Ian Canty.

The Undisputed Truth were originally the brainchild of producer Norman Whitefield, who was integral to the success of Motown in the early years. He worked extensively with the Temptations and during the late 60s developed for the band the concept of “Psychedelic Soul”, which in effect worked to end the relationship between the two of them; the Temps wanted more ballads and vocal arrangements. Which is where our heroes and heroines come in…

The Undisputed Truth were the other main outlet for Whitfield at the time and recorded many Temptations songs, having some success in the US chart, their big hit being “Smiling Faces Sometimes”. Only Joe Harris remained though by 1976 and the band had changed labels to their mentor’s Whitfield imprint. They debuted on their new record company with the first disc of this enjoyable two-fer with “Method To The Madness”.

By this time Taka Boom had joined the band and being Chaka Khan’s sister it’s not a great surprise that the Undisputed Truth now sound more like a supercharged, rockier Rufus than anything else. Which is not a bad thing at all. Though the LP does have a good mix of funk, soul and disco it’s clear Parliament and Funkadelic were a major influence at that point, with the crazy spoken word track “Cosmic Contact” leading the space funk vibe. Giving the band their first and only UK hit of any kind with “You + Me = Love” and a near miss in “Let’s Got Down To The Disco”. This album is a quality item capsule of white afros and silver jumpsuits with strong female vocals and male leads which occasionally verge on self-parody (with the distance of time). It’s all great fun and eminently danceable, with a lot more edge than standard disco fodder which ironically I suppose is why it missed out on greater success.

Three years passed before their next effort “Smokin” though it is a logical follow up, if anything a bit less disco (which was on the wane at this point in time) and a bit more guitar led and harder edged funk. During this time the band had almost completely changed again, though Taka Boom again shows her chops on “Atomic Funk”. This LP’s single “Show Time (Part 1)” never really took off and meant that this record was the group’s swansong, but it is no downbeat affair, full of energy and danceable grooves. “Atomic Funk” clearly bears the George Clinton stamp and is a titanic slab of funkiness and “Space Machine” and “Tazmanian Monster” (what great titles this band dealt in!) are right up there too. You wouldn’t know the band were on their last legs.

This Robinsongs reissue houses both these records with a great Charles Waring band history giving a full picture of the last days of a mostly forgotten but vital outfit.