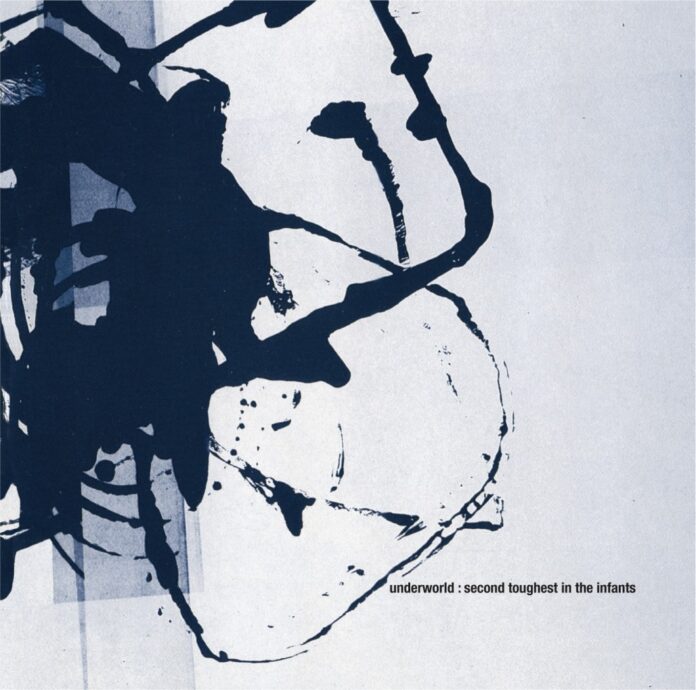 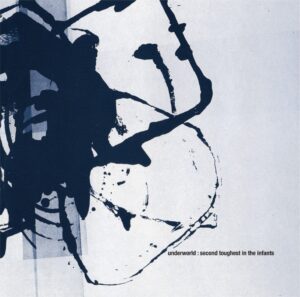 Underworld’s classic 1996 album gets the full reissue treatment. Remastered at Abbey Road Studios and full to bursting with extras including demos, singles, and remixes Simon Tucker reviews this exhaustive collection.

First we got the game changer, then we got the masterpiece. After the excellent decision to get Darren Emerson on board, Underworld delivered their first true classic, 1994’s dubnobasswithmyheadman. Then, just two years later they would release the follow up, Second Toughest In The Infants which not only continued with the level of quality that dubnobasswithmyheadman had displayed but surpassed it making it an essential album to own whether you’re into “dance” music or not. We’ll get to the extras later but first lets deal with the headliner…

Second Toughest..is the complete package. An album that contains the harsh metallic sheen of Euro techno, the science fiction of early drum ‘n’ bass, and the melody and structure of classic transcendent guitar music that was birthed in the late ’60’s. It’s an album that is geographically placed at the centre of any major city in the Western world with flies hitting ultraviolet lights, foreboding alleyways full of dread and illicit thrills that only those brave enough to enter will discover. The album is a taxi drive around the fringes of town, where substances replace real connection, with people shouting lager, lager lager.

We set off on our nocturnal journey with the transitive Juanita: Kiteless: To Dream Of Love, a sixteen minute odyseey that not only sets the scene but also shows that the trio of Rick Smith, Karl Hyde, and Darren Emerson were full of belief in the art they were creating. As opening gambits go, this is a ballsy move and one that challenges you to either get on or get off. We’re in for hell of a ride.

Juanita.. starts with the cascading synths and riding rhythms that the band had become known for before we get a guitar motif start stabbing away. We then get ground down on a line that vortex’s us onto a bleak motorway, flying along uncontrollably, no control of the wheel and the white lines becoming one long one, tempting us to inhale and ride and ride and ride.

Banstyle / Sappys Curry wraps a scarf around us and is the first real display of the bands fondness for drum ‘n’ bass. Full of cascading instrumentation which acts as a whirlpool for thought, this is where we are gently lost in our thoughts whilst surrounded by thousands. Hyde’s free-form cut and paste lyrics are still here and the effect is almost a male take on the Everything But The Girl electro-soul. His voice has always been underrated and whilst many focus on what he is saying or the instrumentation that goes behind it, this song is where you really get a sense of what a powerful instrument it is in and of itself. When we enter the grind-blues of Sappys Curry we have officially landed in the red light district of Underworld’s universe but what happens next shows you that there is certainly beauty to be found here.

It is now time for Confusion the Waitress to make her appearance and she not only sweeps in magically on a throb and pulse but steals the whole show. A masterpiece in atmosphere and storytelling, Confusion the Waitress is the heart of what is great and magical about the album as a whole. Hyde’s vocals are up close and personal, basically stood right next to you talking into your ears, and the music beats and thuds on a bed of Germanic techno and jungle snare snap. This song is pure theater, full of drama and of exciting plot twists, a play that you will want to buy multiple tickets for. Sublime.

Rowla and Pearl’s Girl are where we enter the basement club, sweat dripping from the ceiling as bodies bump and eyes widen. Out of the two, Rowla is more refined and smooth whereas Pearl’s Girl is nasty and harsh (at times almost unbearable in its steel-clash and dagger stab) and more in tuned to the classic Born Slippy (Nuxx).

Air Towel is a psychotropic trip through the skyscrapers whilst Blueski gently makes itself heard with an almost Afro-rhythm, warming us up with desert sensations and sunshine endorphin’s.

Then we reach the end of our journey with Stagger that sounds like a high quality guitar band before little moments of electronics start to appear and we start to march up the hill and into the sunset on a bed of well paced bass drums before a sense of foreboding rears its ugly head. Is it a happy ending? Do you make it out alive and well? That’s for you to decide.

Second Toughest In The Infants is a complex album that is heavily layered and multifaceted. It is a glorious novel which you can dive into time and time again and with this reissue we get another three discs of extra and what mighty extras they are.

Disc 2 offers us singles, B sides, and remixes which include the sumptuous Cherry Pie and two versions of Born Slippy (instrumental and Nuxx Deep Pan) whilst Disc 3 (the best disc here) offers up a whole ten tracks of unreleased material. Disc 4 is dedicated solely to Born Slippy (Nuxx), that mammoth hit brought to many people’s attentions via Danny Boyle’s Trainspotting. Every version brings something fresh to the table and not once do you tire of hearing the basic elements of the same track repeated. It is especially powerful on the live versions taken from Tokyo in 1994 and Zap Club, Brighton the same year.

Basically the extras on offer here are worth the asking price alone so this makes this reissue essential.