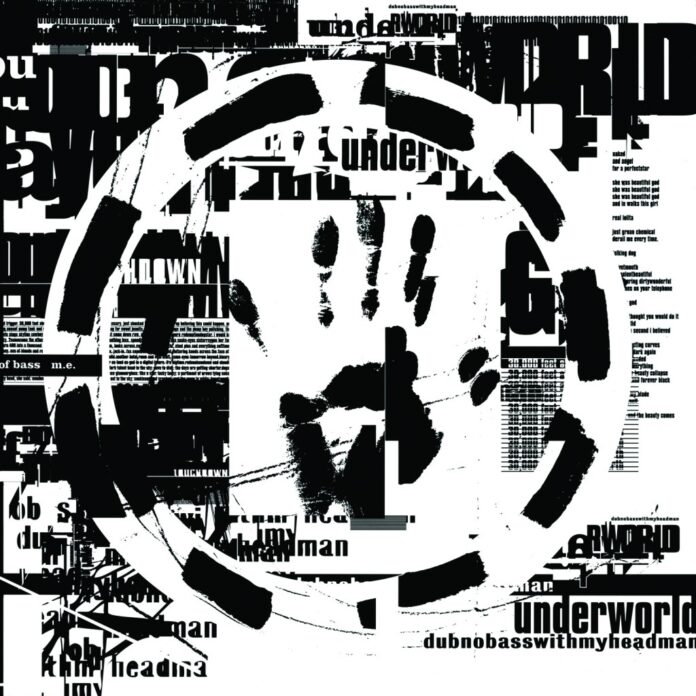 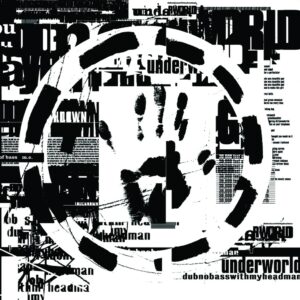 Underworld’s dubnobasswithmyheadman is twenty this year and to celebrate a comprehensive reissue has been released, meticulously remastered at Abbey Road by the band’s Rick Smith. For Louder Than War Simon Tucker, a long standing fan of the band, reviews.

And so it creeps in, a gentle pulsing beat, a motorik synth, a gentle caressing vocal mumbling into your ears cajoling you into getting onto the ride. Slowly layers of textures and metallic symphony enter the frame upping the emotional stakes. Rolling and rolling along the gentle voice morphs into geezerish slang and back again. Seven minutes of barb-wired honey…”and I kiss you dark and long…”

This is how we are introduced to the world of dubnobasswithmyheadman, the third Underworld album but their debut as a three piece after DJ Darren Emerson joined the group developing their synth-pop / krautrock tendencies into a different beast. Becoming more and more infused with the tropical heatwave that was Acid-House, the band created a masterwork in electronic music, opening a door through which many others would follow them through. Until dubnobass… the 12” record was king of the dance world with many producers just focusing their energies on that format eager to get their new cut played by a DJ of note, to a crowd of note, and at an event of note. After dubnobass… things became somewhat different with electronic artists and bands using the album format just like their indie/rock contemporaries.

Instead of just being a collection of 12” singles, dubnobass is a complete listening experience with songs often blending into each other making it similar to the early, glory days of Prog. In fact, over its running time, Underworld manage to touch upon every great piece of British music from the previous twenty-plus years with Bowie’s European adventures, Floyd’s sonic experiments, and Soul 2 Soul’s grooves all playing their part.

Lyrically, dubnobass also raised the bar for electronic artists as instead of just throwaway vocal stabs or, “get your hands in the air” call, we are treated to a patchwork of Gysin/Burroughs cut-and-paste beat poetry with seemingly unconnected and nonsensical phrases creating instantly memorable moments which linger in the mind long after the music has subsided. The best example of this is on the classic DirtyEpic. Over its near ten minute running time we enter the world of a man whose loss of sexual drive for his partner is enhanced by increasing dependency on phone-sex and voyeurism. As the song develops we witness the narrators relationship and mental state deteriorate with visions appearing to him, the most memorable of which is “Christ on crutches”. It is this phrase, even more so than the repeated refrain of “I get my kicks on channel six” that really intrigues and enthralls. What does it mean? Why is Christ on crutches? Is he broken by the sins of the narrator or the sins of the world? Is he coming back to reclaim the narrators soul or is he is back to punish? With this one phrase alone, the listeners mind can spin and weave its own meanings and understandings.  Not only is DirtyEpic a lyrical masterwork it is also beautifully emotive and we cling in hope that the narrator survives this episode though with the uttering’s of “here comes another God” our hopes of a recovery are slim. In fact worship, whether it a be a “God” or an object is a recurring theme of the album with Elvis, sex, and even skyscrapers all being presented as things to be desired and, praised, or even feared.

This reissue has been remastered by the bands own Rick Smith at Abbey Road studios and the results are extraordinary. You can now hear every nuance which makes the album just as enjoyable on headphones as it does on a loud system.

With the five disc box set we are treated to a slew of extras all of which warrant their place in the collection. This is not just an excuse to throw a load of B-sides or badly recorded demos out, this is given the buying public real bang for their buck with treats like Disc five’s live workings being a particular case in point.

However, it is still the main album that is the star of the show. After its release dance music truly broke through with Orbital headlining Glastonbury Festival and The Prodigy releasing their cold-steel chaotic masterpiece Music For The Jilted Generation all in the same year. Things really would never be the same again.

Dubnobasswithmyheadman is not a relic to be admired from afar or a piece of nostalgia. It is current, it is love, death, hope, dismay, triumph, and tragedy. A truly magical work that firmly belongs in the upper echelons of British music. A triumph of heart and machine.

The band have also announced the following tour dates for 2015: