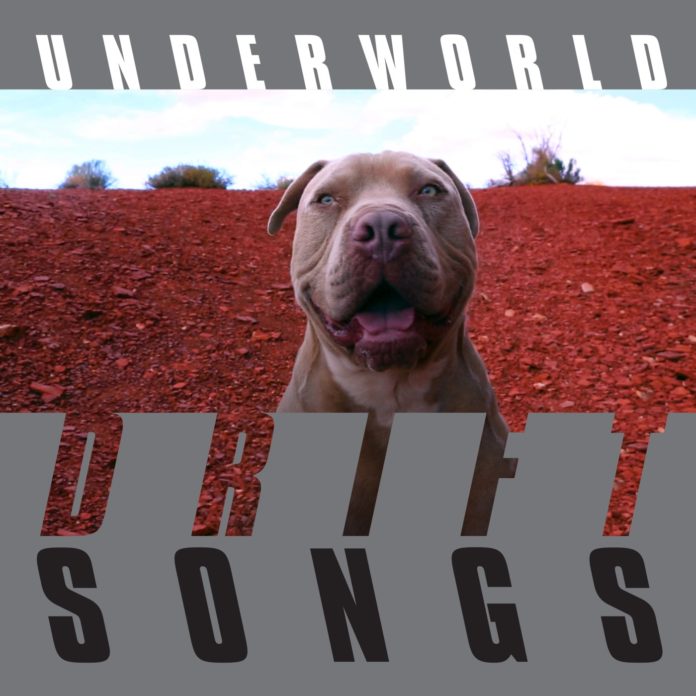 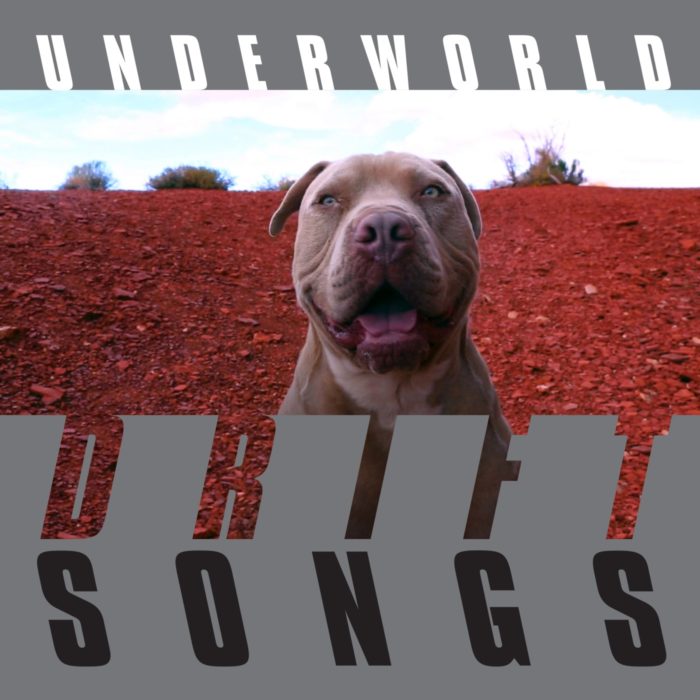 The complete set of recordings  / films made by Underworld throughout this last year. Simon Tucker finds a band at the peak of their powers.

Dogs. The protectors of heaven and hell. Symbols of stature. The links between us on Earth and the netherworld. Weaponised by sloths using them as a symbol for their toxic form of masculinity. Helping people see and to live. Our best friends. A thing that needs feeding when their form is black. The protectors of the..underworld. It is the protector, with its ghostly eyes, that stares at us from the cover of this most wondrous of artistic ventures. It is the black dog of depression that makes an appearance on the track Another Silent Way. The dog is Underworld themselves leading us through a journey that has lasted a year and now we get to take stock and admire the project they called DRIFT.

Last year Hyde and Smith decided to embark on a musical project that would see them write, record and release a song every week for the full calendar year. Often the songs would be accompanied by film. Now we get books, 7 CDs a Blu-Ray and even a 58min sampler LP that manages really well to distill the whole project into a long player that feels like a classic Underworld album.

There would be fellow travelers drawn in to DRIFT including members of Black Country, New Road, Australia’s The Necks, the noise outfit Melt-Banana and economics writer Aditya Chakrabortty which in itself tells you that this wasn’t just some ego trip for Hyde and Smith fresh from the success of their well received 2016 album Barbara Barbara, We Face A Shining Future and that wonderful EP they made with Iggy Pop, Teatime Dub Encounters. Nothing about DRIFT is lazy or cocksure. DRIFT is the sound of a band flying with no net. Sometimes they turn in on themselves rediscovering new nuances in earlier creations. Sometimes they let themselves be the beat poetry bass and synth wizards that we know and love. ‘Dexters Chalk’ is a gnarly acid stomper that barks hard and bites even harder. ‘Give me The Room’ pulses like the echo of the 90s whipping back on to us with new and improved vigor…a Kubrick twist on the loved up generation. Where DRIFT really succeeds though is not in its familiarity but in the sheer scope of sounds and images that Underworld paint with. Ambient dubscapes and spoken-word rub shoulders with glitch and glitz and never once do you feel like taking a breath or turning back. This is a most intoxicating journey and one you will want to see through from start to finish. Every one of the full collections 52tracks has something in it that makes it worthy of its place here. Nothing feels throwaway or frivolous. The fact that DRIFT also manages to carry a serious political and sociological message whilst retaining its lightness and humor shows us what craftsmen Karl Hyde and Rick Smith are.

John Doran of The Quietus recently compared Underworld to German pioneers CAN and that comparison is perfect. Like CAN, Underworld always seem to be in a constant state of evolution and knee deep in the high-art of experimentation. What they also share with their German predecessors is the sheer wealth of quality that they produce with DRIFT being the ultimate example of this. Fired up and free from the leash, Hyde and Smith now plan on continuing the project into 2020. They are now the gatekeepers and the spirit guides. Cerberus and Snoopy. As they continue we wish the road rises up to meet them and we will be following them every single step of the way for this is a story that has many enthralling chapters left to be written.