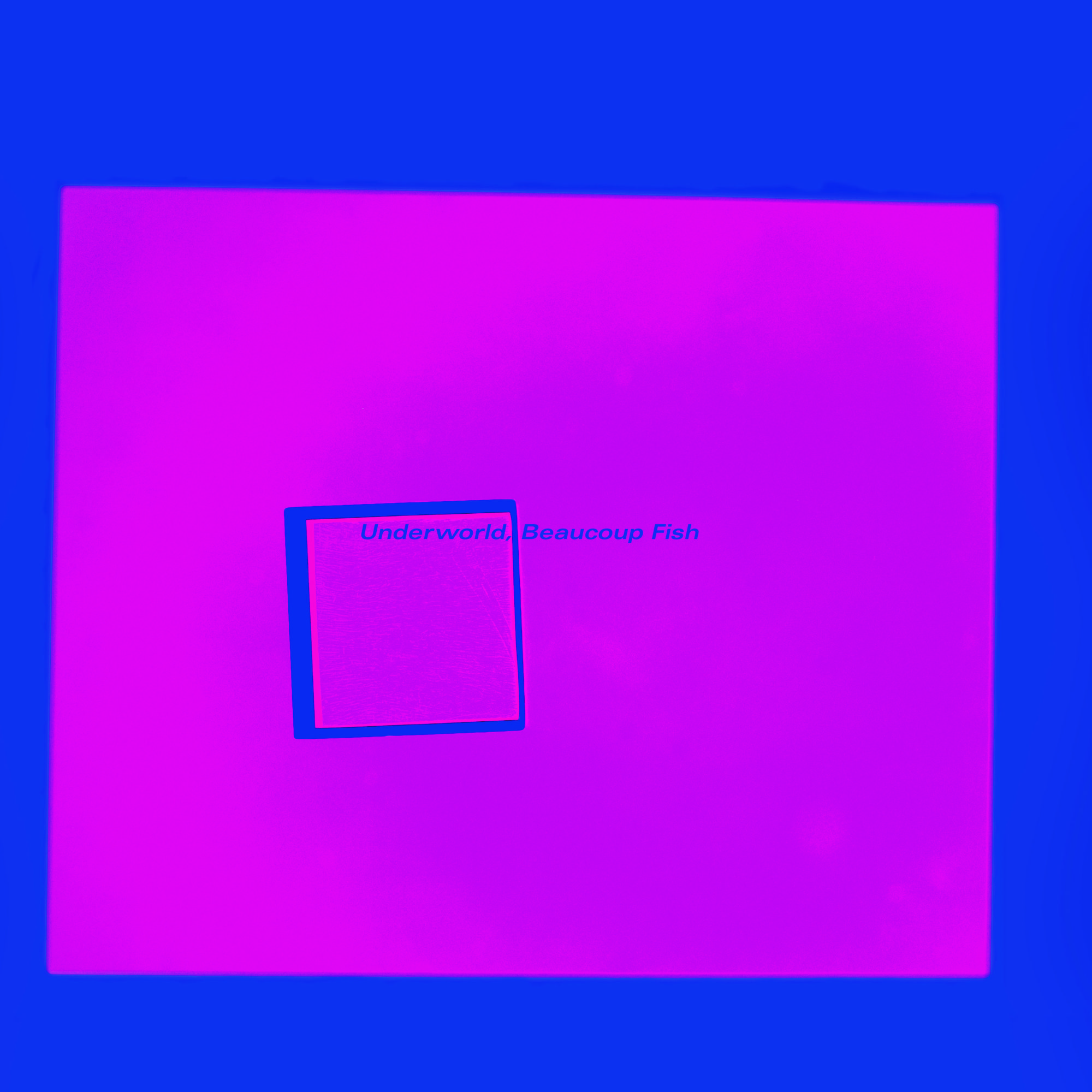 Going back to Underworld’s music now with the benefit of hindsight and now sober mind is a startling experience. The songs that made up Underworld’s first three albums with Darren Emerson in the band are as familiar as the rave flyers plastered to the bedroom wall ever kept fresh. As vivid a trigger of misspent youth as the whiff pf Vicks vaporub, Lynx Africa or the sight of a high-vis vest. When these albums were released many of us were living and breathing it though some were about to change ways and sort lives out. You knew at the time this was really great music but what about now? Is this love just rose-tinted trickery? One spin of Beacoup Fish gives you the answer.

The distant sounds of a field recording eases in before we renter the acid house with squelch and rhythm. Distorted vocals talk to us from a perceived future. We are put down facing forwards and sent on a journey. There’s a slight trace of the past with a sneaky and subtle banjo-type sample that emerges through Cups (nice nod and a wink there you guys). Gradually the whole thing becomes more intense and all encompassing. Scattered vocals, edgy, disruptive. Where are we headed? We’re headed deeper…

Switch up, gut-punch of bass drum and the quick trill of a piano sets a cyclical motif rolling us before Karl Hyde, that glorious free-form circus master, emerges spouting phrases and narrating tales of pushing, pushing pushing. The unique talent Underworld have of creating the high-brow with the lustful is on full display with Push Upstairs. It is music for the mind and the pelvis. Thinking and shagging. Dance music so sexual and cerebral that they have never been equaled. In the end Underworld know how to arrange a piece so it pulls your thoughts into different directions. Phew, need a breathe.

Squelchy acid bouncer Jumbo is light on its feet and heavy with serotonin. A breezy affair that floats by, twinkling like the reflection of the sun on a river. It’s pleasant but what about us who like things slightly more fierce? Well that emerges via the tape slipping distorted interlude  Shudder and the I Feel Love 90’s update that is King Snake. Here is where we are given full license to throw off all shackles, grip hair, grit teeth, stomp stomp stomp. For all the talk at the time of the trio not really talking and working in separate studios, King Snake shows that when it came to what matters (the final product) Hyde, Smith and Emerson were always on the same page. Hyde’s vocals throughout are flickering and strobe like. Full of delay and echo. Multiple personalities flashing around our ears. Drnk drink drink, Tom and Jerry indeed…

Winjer is pure Romford electro-blues. A self-deprecating dig at oneself for always whinging about life or is it aimed at someone else? Someone who was bringing Hyde down? Knowing of his battles with alcoholism it could be Hyde is both these characters. A conversation between his two sides. The light and the dark. This is a universal theme which we can all relate to.

Skym takes us deeper into the void playing more like a Current93 song than a “dance band” cut and then we hit the first fault in the album. Even at the time of release Bruce Lee seemed like an oddity in the Underworld catalogue and it has not aged well at all. It’s a faux hip-hop slop that sludges along and to be perfectly honest it reminds one at times of the gooning Robbie Williams’ Rudebox. No seriously. Of course that whole “Big Beat” thing was rife but instead of taking inspiration from the first Chemical Brothers albums the trio seemed to be inspired by Norman Cook which is never a good thing.

Luckily we are lifted out of the malaise by the metallic, tin-scratch techno of Kittens a song so rich it should be banned from schools by Jamie Oliver. Kittens is a symphonic, gargantuan song that reveals more and more as you listen. In 1999 it was a song for the bass heads, in 2017 it is a song for the modern classicists and is further proof (if needed) that the electronic artists who blossomed in the 90’s were every much as skilled at song arranging, emotional punches, and pure dynamics as ANYONE else working in more “accepted” genres from the past to the present.

Spinning us backwards is Push Downstairs where we get to the hear the lyrics Hyde had rinsed us with on Push Upstairs placed in a dreamy dub setting. Hyde’s delivery is full of sass and swagger and the music does a great job of giving the hips a gentle sway.

Home time now and Underworld ain’t letting us leave easy. In fact they are flat-out refusing to put us back on a safe path, instead crunching our thoughts with Moaner (another song that was released as a single at the time). Moaner is the trio of full smack-em-lift-em-drop-em mode. It is Underworld as deliciously unhinged as they ever have been. Moaner sees Hyde tells us a tale of boys and girls, scattered, cut up and pasted. Moaner is relentless, breathless, brutal, beautiful, sweat-drenched,…..and just so so good. As album closers go this is up with the best.

This reissue comes with three whole discs of extras with the second disc in particular being a highlight as it contains unreleased outtakes from the recording sessions. Nifter sees the band enter Depeche Mode territory whilst the “Garage Mix” of King Snake is wonderful and one that holds up against the final released version.

Disc three and four contains a whole slew of remixes for you to dive through with DJ Hype and DJ Zinc’s versions of Bruce Lee standing out as they actually manage to turn the original into something that excites and enriches.

Beacoup Fish completed a rich trilogy of albums by Underworld. A trilogy not many other artists in the electronica field have managed. It is a rich listen that hits hard when it needs to and trips out when called for. Is it as good now looking back after all these years? It’s better. Now with real life fully in swing and all the responsibilities that brings with it, Beacoup Fish now sounds more refined, cultured, and technicolor.  They’ve got music for your mind your body and your soul. Underworld. Beacoup Fish. Thanks for the memories.