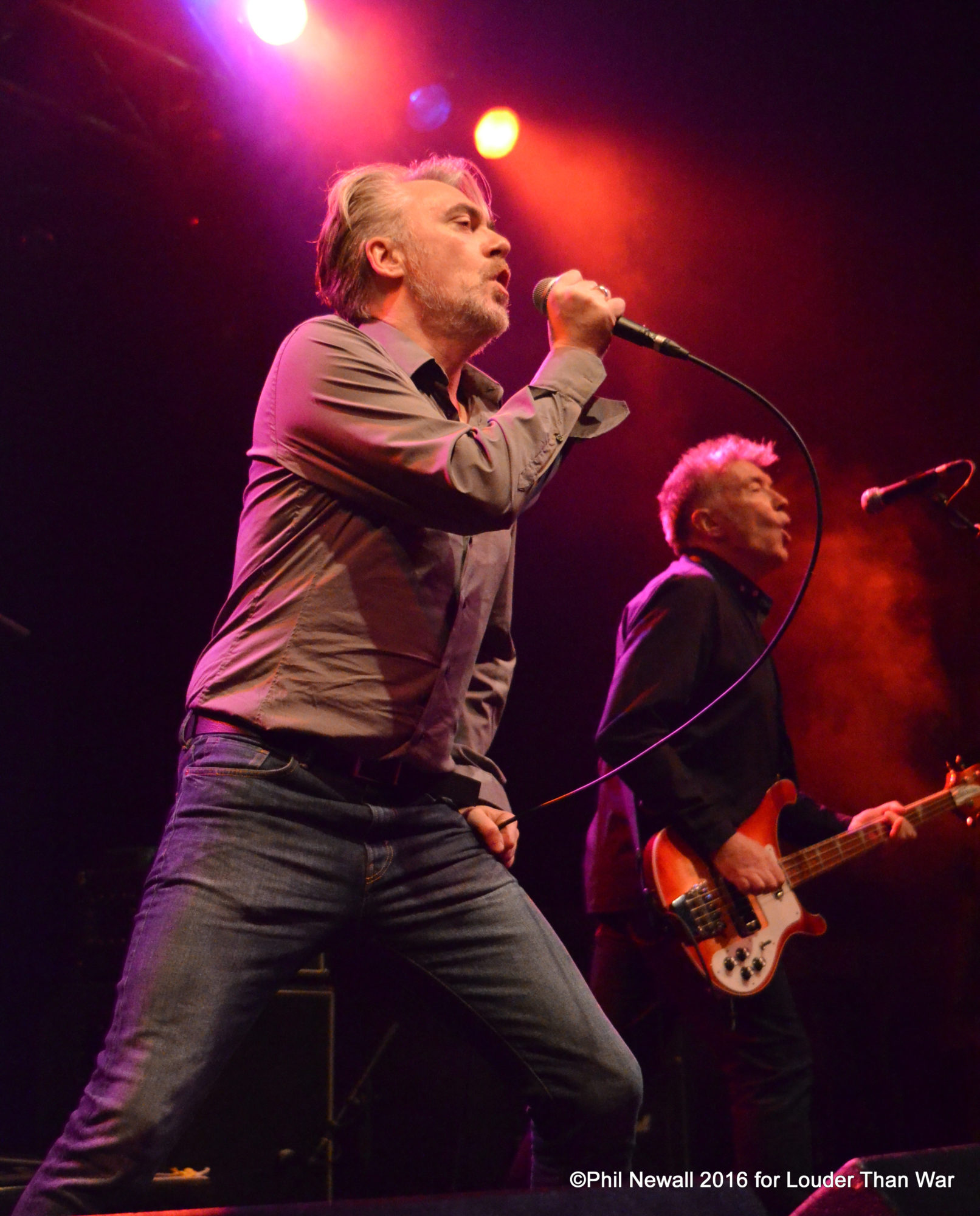 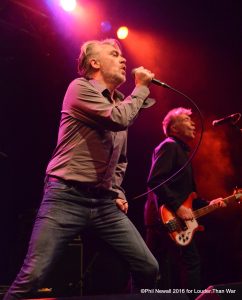 Standing here watching this perfect jukebox band you are reminded by just how many great song the Undertones have.

Like Buzzcocks, every riff, every vocal line, every moment drips in pop perfection and the thrill of two entwining guitars that cram so much melody and adrenaline into the music that their music sounds eternally joyous, is part of the heart of soul of their greatness.

It must be a decade now since The Ramones vacated their throne with the sad deaths of all the key members leaving  them to become the museum band and the perfect T-shirt for wanna rockers and yet bands like the Undertones are their musical equals. With a couple more tours like this, this packed, this celebratory, this good, then the Undertones could be in serious contention yet again.

It’s been a bumper year for punk and punk related bands; 40 years in and some of the bands like the Stranglers and The Damned are bigger now than in the golden era. Every band from that time who had that extra thing are now fast rising – veterans being embraced and still sounding great.

Somehow punk has managed to get older with a dignity that was never part of the agenda when it exploded across the UK in the late seventies. A few years ago the Undertones reformed and played a clutch of great shows to the true believers. In 2016 they play an autumn tour to packed houses with tickets flying out and it’s a perfect justice for one of our great pop bands.

With Paul Mcloone taking on the vocals the band has got around the awkward situation of estranged former frontman Feargal Sharkey with Paul making the role very much his own and somehow it really works. He has a voice that is in the same ballpark as the former frontman and is from the same Derry background but has very much put his own slant on it.

He has his own stage presence that creates his own statement – it’s a very tough job to step into iconic shoes but he is so good that it matters little and he inhabits and owns these songs and the band have a unity of purpose that was always part of the key to them. It’s that idea of 5 scruffy herberts from small town Derry rolling to in Belfast and the more big city cool punk scene and playing key gig that blew everyone away that still is at the heart and soul of the band.

Tonight they wander on the stage with an unassuming humility before bringing the house down with a machine gun set list of greatness.

The Northern Ireland punk scene was full of bands who wrote songs dripping with melody and manic pop thrills – the Outcasts, Rudi; whose ‘Big Time’ is the great lost song of the time and smaller but equally great bands like Protex. It’s the eternal good vibrations of the bands and their the melodic brilliance that is an endless seem of joy for any music fan.

When the Undertones turned up in Belfast for the first time, the locals couldn’t help smiling at the scruffy and awkward bunch from up country until they plugged in and played. The Undertones may not have had the rock n roll wardrobe of their beloved Heartbreakers or the perfect glam swagger of their hero Marc Bolan but when they started playing they were the equal of these groups – steeped in rock n roll they knew how to make the deceptively simple guitar tricks sound so eternal and brilliant.

It’s a stunning 31 song strong set that is a perfect education in how to write classic guitar pop music and crank it with the adrenaline thrill of razor sharp guitar. Never have this band sounded tighter, never have they sounded more powerful and if some sections have come to pay homage to the eternal classic, teenage kicks, they leave the room with their heads spinning at the breadth of the band’s songs writing brilliance.

The Undertones can deal psychedelic ballads like ‘Julie Ocean’ and the gorgeous Wednesday Week with an aplomb and brilliance that is entrancing. They can deal the eternal teenage anthems like ‘Get Over You’ and ‘My Perfect Cousin’ that don’t date, they can deliver wisdom with a wink and a perfect pop couplets with a deep love of the form. 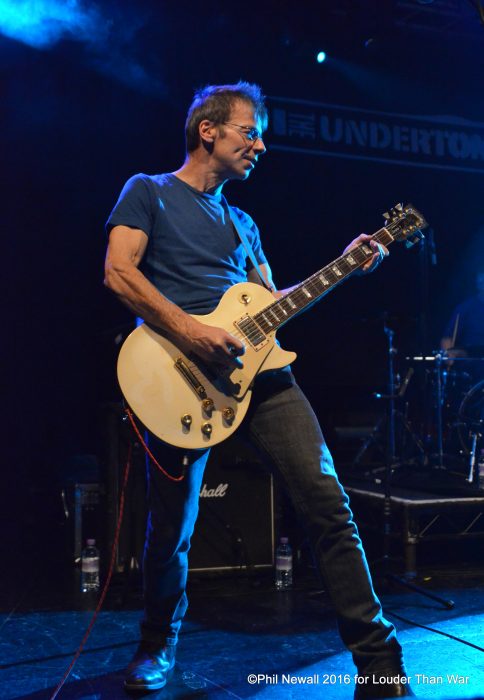 The Undertones have that punk thing where no note is wasted and every moment counts. They may be widely acknowledged as being one of the great pop bands that came out of the punk era and ‘Teenage Kicks’ may be  student indie disco staple for ever but the band should be at the heart of the pop conversation just like the Ramones now are. They deliver melancholy, social comment and the observation of detail that is so perfect – like a Kinks through fuzzbox they magnify the minute and make the profound out of the simple. 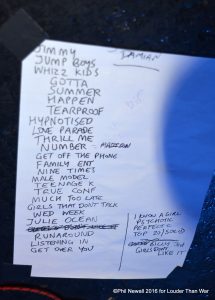 You just have to look at the set list to the right  to see just what an armoury of pleasures they have. Each song is a vignette to guitar perfection with lyrics to match – just look at all those great songs – there is not a weak moment in there.

Armed with these songs the band could take world if they wanted to – a testament to the songs generational power. Somehow for  band that as so immersed in the acne infused world of seventies teenage they sound like perfect vets with a set to match – these songs are timeless and still strike a chord in an all ages audience – these are not tired reruns but celebrations of the electric howl. 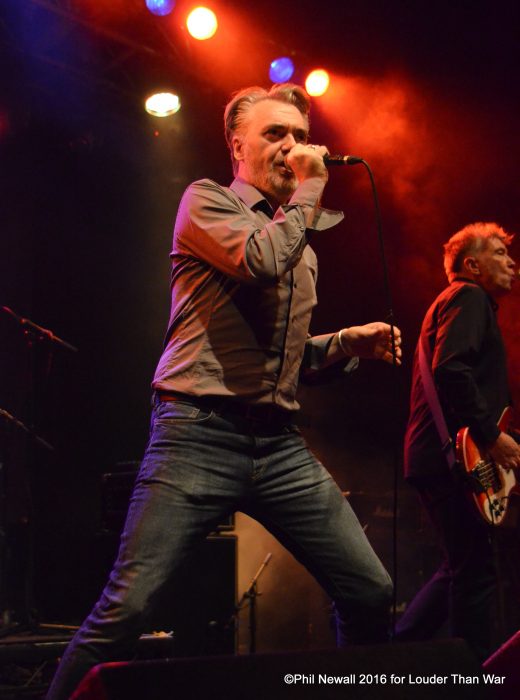 The Undertones are on fire – this is a great rock n roll show and watching the undoing leave each night you can feel the Ready Brek glow coming off them – an idea which sort of sounds like an old Undertones lyrics in a way.

This is a joyous set of great songs that are so varied and yet so them that their own personal jukebox fits perfectly in the seventies and the now and defines the word ‘timeless’.