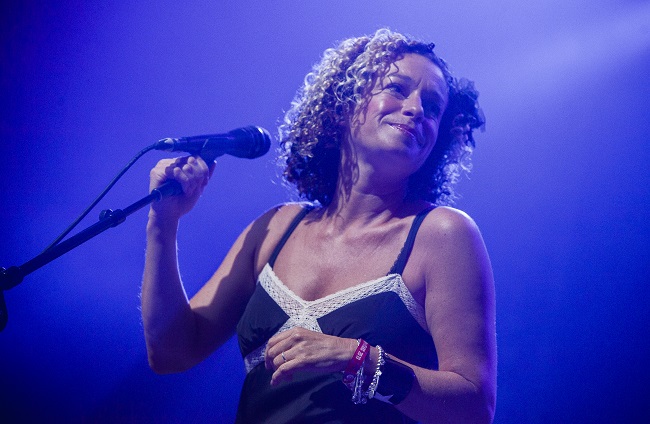 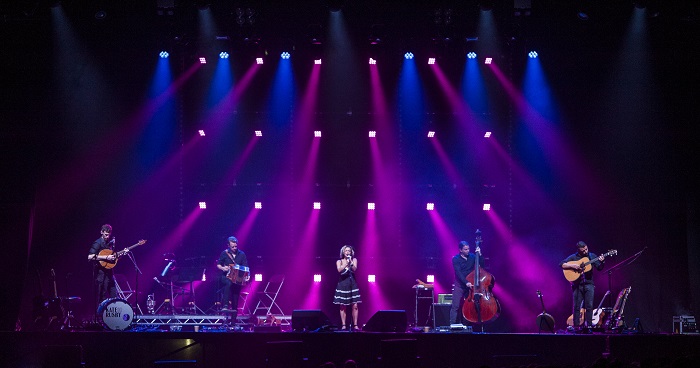 UNDERNEATH THE STARS FESTIVAL

In the second part of our review of the Underneath the Stars Festival, it’s Sunday, and ahead is an intriguing medley of music, and a conversation with Ruth Jones, the writer of Gavin and Stacey. Later in the day, even rain of biblical proportions will not stop the momentum of this great Festival.

Nia Wyn from Wales takes to the Planets stage, accompanied by keyboards and bass, and creates an immediate impression with her distinctive blues vibrato tinged voice. ‘No Goodbyes’ written about a friend who took her own life is a very moving song with striking guitar lines and vocal harmonies, and the line in the song that goes “the pain that swallows you whole” feels particularly affecting. Come Home To You, blends soul and folk, with some stunning keyboard washes, choppy guitar and funky bass. Do You Love Enough, Nia’s second single, with its rolling keyboards and clipped guitar shapes, glides out effortlessly from the stage.

Nia is working on a debut EP which will be one to look out for.

An Audience With Ruth Jones is an absolute delight. Ruth is the writer with James Corden of Gavin and Stacey, and in conversation on the Planets stage, shares some wonderful stories.

We are immediately transported from South Yorkshire to Barry Island, a South Wales seaside town close to Cardiff, and the defining and iconic location of much of the Gavin and Stacey television series. Ruth tells us about recently finishing the filming of the new Gavin and Stacey Christmas special on Barry Island, where Ruth quietened a noisy group of over 100 fans, by taking on her Nessa persona from the series and being very rude to them! Insisting that they be quiet, though of course with the promise of selfies after the filming was completed.

Ruth also shares quite endearingly with the audience a recent “escapade” in a Hotel in Wakefield, where with a friend she stumbled across a tribute acts convention. Fuelled by a few gins, Ruth quite marvellously got up to sing with a Tom Jones tribute act, the No.1 Comic Relief hit she had with Sir Tom Jones and Robin Gibb …..(Barry) Islands in the Stream.

Ruth also talked about her well-received first novel Never Greener which originally started off as a screenplay. She went to the factory where the book was being printed, picked one copy out of the line, and wrote inside “This is the first book I ever signed”.  She then put it back in the line for one lucky reader to receive. A really sweet story.

Ruth,  amongst many good reviews for her book, got a not so good one from the Guardian. This causes her to remark that if she had to review a book and didn’t like it, she would give it to someone else to review, realising that whatever she felt, the writer would have put a lot of work into it. This generosity of spirit, and appreciation of kindness was reinforced when Ruth concluded, “ I get upset by how awful people can be to each other, and we don’t hear enough about how kind we can be to each other….little acts of kindness make my heart soar”.

K.O.G and The Zongo Brigade provided one of the absolute highlights of the Festival, with a fabulous set full of West African grooves, that had before long everyone up dancing, at the fully seated Planets stage. 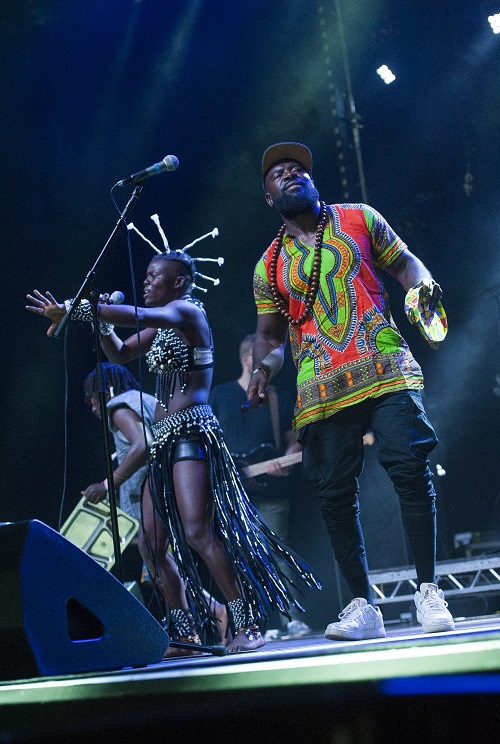 As K.O.G himself tells us early in the set, “We don’t usually play to a seated crowd, but when it gets crazy, we expect you to show what you have got!” Their hi-life influenced music, has an incredible flowing rhythmic pace that builds in intensity, with everyone dancing on and off stage, with irresistible spindly guitar leads and melodic punching horns, and often chanted or operatic like vocals. It’s a completely heady mix.

A song meaning “I Love You”  had some stirring carnival-like horn phrases and a singing trumpet solo, with each of the three front line vocalists in turn leading the song.  From the stage, the message comes, “The love and energy you give us, we give you back”, as a flowing walking bass line ignites the audience again, with the keyboards literally sounding like the wind blowing through the trees on a windswept shoreline. The punctuating rhythmic breakdowns further increase the energy between band and audience.

K.O.G muses from the stage “How long have we got left…. 2 hours?” to a rousing cheer from the crowd. The last number Mango Mango with its terrific call and response format sees all the aisles and front of the stage filled with dancing. A joyous and triumphant set!

Le Vent Du Nord, which translates as the North Wind, bring folk music from Quebec to the Planets stage. The multi-part harmonies, and changing and swapping of instruments and lead vocals between all the players, is quite breathtaking. The rhythm quite quirkily is created by the feet of different members of the group.

The group ask “What is a country or territory? Do we need barriers or walls?”, and the audience shouts back a resounding “No”. Two fiddles and an accordion drive a fabulous reel, with members of the audience getting up one by one to join the dancing at the front of the stage, as the piece plays out.

A story about how historically in Quebec families, women were the only ones to read and write, and this was how the traditions and songs were passed down through the generations, leads into a song dedicated to the women who did this, and in the audience. The swing of the fiddles and guitar, interacting with the keyboards, sets the scene for a fabulous accordion lead, played by one of the group while jumping up and down at the front of the stage. 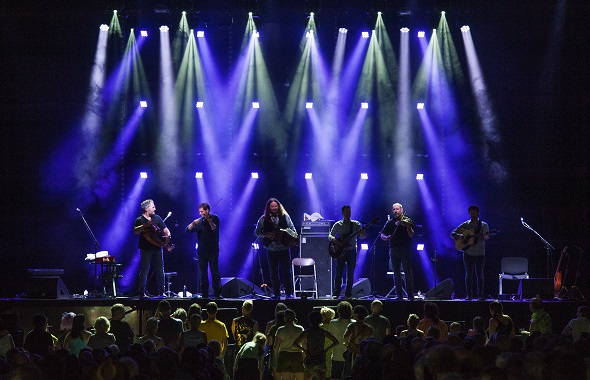 A song about a city in New France that fell to the British army in the 19th century though said to be impregnable, we heard had been put together by the defending soldiers to explain what had happened. It was sung a cappella, with all the voices in unison, yet with each voice also quite discernible and distinctive. As each member of the group comes to the front of the stage singing, the effect is quite magical.

Near the end of a terrific set, a hurdy-gurdy solo has a bit of Jimi Hendrix in its delivery. This is music for the heart, and at the conclusion of the set, the group stand with hands on hearts to tumultuous applause.

Resplendent in matching turquoise jackets Yorkshire’s very own Hope and Social come on to the stage, and immediately James from the band teaches the audience a rather complicated dance for their first number. They are quite wonderfully that sort of band! On the second number, Ed takes a Hammond organ solo as the band crouch down on the stage listening, followed by the brass section weighing in with a solo. They are a real collective.

A song about still believing in magic is described as “an antidote for the cynicism we heard Billy Bragg describe as the biggest obstacle to change”. With an impassioned instrumental section, the biblical like downpour of rain falling outside could be heard accompanying on the roof of the Little Lights tent. Lights were turned on to allow the crowd to shuffle in and make room for anyone caught outside. The band responded with a Latin tinged rocker to blow away the blues!

The audience sought to describe how much water was pouring across the ground as the band good humouredly tried to guess. A question from the stage of “When will we call off the gig” was answered by an overwhelming “No!” from the audience.  Deep Heart a very joyous uplifting song with gorgeous close harmonies and lovely whimsical keyboards, and a fabulous brass refrain kept our spirits up… “These days are now the best days of your life sweetheart ….’.

With lightening outside the band finally had to stop and the audience was asked to stay in the tent until any danger past. Hope and Social were entirely the band for the moment. Well done guys!

Kate Rusby headlining on the Planets stage began with Benjamin Bowmaneer with the stage all lit in green. With Damien O’Kane’s melodic guitar picking overlaid by swirling accordion, and Kate’s voice floating dreamily over the instruments, it’s a great set opener. ‘We Will Sing’ the first song that the audience joined in with, felt apt in its communal feel, reflecting the community spirit of the Festival, despite the downpour. As Kate says, “You can’t really say you have been at a Festival if there is no mud to show for it”.

The Farmers Toast from the new album Philosophers, Poets and Kings, dedicated to the farming family on whose land the Festival takes place, has Nick Cook’s lovely accordion break, and the bass drum comes in and provides a beating heart to a beautifully sung song. Kate indicated that they had a poll for songs to play on the autumn tour, and ‘Awkward Annie’ won. The song is driven by some mesmerising double bass playing from Duncan Lyle.

A brass section then joins the stage. Nicknamed ‘The Valves’, they scoop up and hold Kate’s anguished voice in the most wonderful and expressive way on Halt the Wagons, about a horrific local pit disaster from 181 years ago. High On A Hill begins on the banjo. Its a song resonant of the great Steeleye Span in its compositional feel and vocal styling, with a lovely brass motif.

Kate then reads out a proposal from a member of the audience to his partner that is romantically accepted and leads to a chorus of congratulations. It could only happen at Underneath the Stars. Jenny also from the new album is about a horse that responded to love and became a race winner and has a great uplifting sound accented by the terrific brass section. An excellent set of instrumentals by Kate’s very skilled band follows and is marked by some haunting use of the moog, and a very jazzy bass solo from Duncan.

Big Brave Bill is transformed and expanded by the brass instruments, and of course, the hero of the song makes his traditional appearance during the song. Underneath the Stars would not be the Festival it is, without Kates uplifting and empathic songs, and performance that connects so intimately with the audience, and the communal and welcoming spirit of the festival.

All that is left is to look forward to Underneath the Stars in 2020.

Written by Gareth Allen, with thanks to Anne Robertson for her musical insights and input.

Photography by Mike Ainscoe (you can find more of Mike’s writing on Louder Than War at his author’s archive. He can be found on Facebook and is currently revamping his website…)