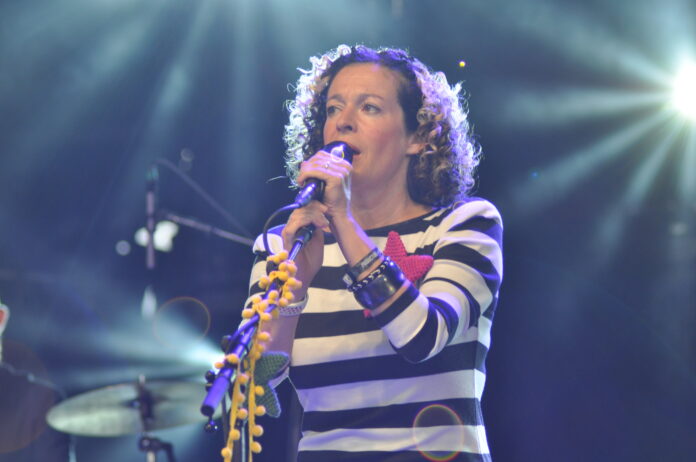 Underneath The Stars Festival

The return of live music, and particularly music festivals, feels like stepping into a new and hopeful world, where music can be a powerful and positive catalyst for change. The sense of connection, solidarity, joy, and anything being possible, that live music inspires, is palpable at the Underneath The Stars Festival, as it makes a welcome return to our lives in 2021.

It’s Friday, and entering the Underneath The Stars Festival site, you can sense the shared anticipation, nervousness, and wonderment. With one outside stage and screens, rather than the usual two tented stages, and a reduced capacity, and requirements for face masks in certain areas and sanitiser available at multiple points, the festival is putting the wellbeing of the festival community first.

It’s raining hard, and somehow this seems to increase the feel good factor, as Lauren Housley and her amazing band walk out onto the Galaxy Stage, to open the festival. Lauren is one of our most talented new singer songwriters, blessed with a sublime voice, and a natural rapport with audiences. Lauren plays one of the best festival opening sets this reviewer has witnessed.

Bless His Soul from the new album, Girl From The North, has a jazz-like swing, and is resonant of the Americana of the legendary The Band, in full flight. The harmonies are uplifting, and Lauren’s wonderfully expressive voice soars on the waves of music emanating from the band.

Breakdown, again from the new album, is initially a moving ballad, before it hits a breathtaking tempo change, and Lauren and the guys thrillingly morph into a metal band, and literally tear up the stage. Tom, Lauren’s co-writer and producer, unleashes a stinging, fluid guitar solo as Lauren scat sings with a passion. The audience reaction tells you that this is without doubt, an artist with a great future ahead. Louder Than War interviewed Lauren after her set, so look out for that appearing.

During Nick Hart’s set, the heavens really open up, and the downpour takes on a new intensity. Nevertheless, Nick sings and plays beautifully, including, interestingly, a song about Robin Hood. His gentle acoustic tone, crystal-clear voice and poignant storytelling, are a joy to listen to.

Bryde, led by Sarah Howells, produces a grunge-filled dynamic sound that is very well received. The driven playing and impassioned vocals of 80 degrees from The Volume of Things album works well alongside the more slow-burning songs.

Following on is Family Folktunes, with a quirky folk take on the TV game show, and blessed with a needle match between the musical families of the O’Kanes and Rusbys. Things of course get very competitive, and who would have thought that the banjo could be such a controversial instrument.

Dallahan, a four-piece with the interchanging instruments of fiddle, accordion, guitars, banjo and mandolin, get the festival party going, with lots of joyous dancing at the stage barrier. It is very moving seeing people being able to let go, after all the challenges of the pandemic and lockdowns. A series of dance tunes at the end of their set, mixed music from Scotland, Hungary and Romania, and the shared sense of joy from the musicians on the stage, and the festival audience, is wonderful to see.

Eddi Reader plays one of the defining and most emotionally charged sets of the festival. From inspired interpretations of Robert Burns, to the jazz swing and harmony vocals of Perfect, dedicated to her father, she takes the festival by storm, accompanied by her superb band.

A tribute to Amy Winehouse sees Eddi respectfully and movingly interpret Love Is A Losing Game. Her set finishes with a delicate, and beautifully crafted version of Moon River, dedicated to her mother Jean. It is simply electric, and in this moment the song truly becomes Eddi’s. For everyone at the festival, it seems to symbolise the hope of a new dawn, after everything we have gone through.

Paul Carrack finishes off the opening day of the festival, with a high energy set, full of classic hit songs. His finely honed band, are in great form, able to shift effortlessly to meet the contrasting moods of the songs Paul played.

The Squeeze classic Tempted is sung with conviction, as if it had been written yesterday, and with a great hammond organ solo. A movingly played version of The Living Years, with Paul’s piano and soulful voice to the fore, brings home the key message of the song – to really listen to the people close to you, and to say in the moment what is in your heart. A message never more relevant than now.

A wonderful version of Groovin’ gives Paul’s voice at it’s finest, with the influences of Otis Redding and Marvin Gaye permeating the stage. How Long, the Ace classic, written unbelievably in 1973, sees the audience singing perfectly the chorus of this great song. A fitting close to a fantastic first day, where we welcome back the festival experience.

The Cable St Collective open the second day of Underneath The Stars, with an intoxicating and melodic dance sound, driven by Highlife-influenced guitars and brass, and sparkling lead vocals. They impressively create a dance festival in front of the stage – a pretty amazing sight on the morning of the second day of any festival.

Midnight Skyracer hit the stage with a fabulous whirlwind of exhilarating bluegrass music. The band haven’t seen each other for a year and a half, and they are clearly loving playing together again.

Silent Woman from the Shadows On The Moon album, has its first live outing, resplendent with sublime harmonies and breathtaking electric mandolin lines. Instrumental song, Steaming Buzzard, has an intricate banjo introduction, followed by the fiddle, guitar and electronic mandolin all taking leads. All the instruments naturally complement each other, with the double bass driving the rhythmic pulse of the music.

I’m Gonna Sleep With One Eye Open, a traditional bluegrass song, mirrors Dolly Parton’s version, and is full of swing, with a big sound and blues feel, and a terrific dobro guitar solo. It goes down a storm. Midnight Skyracer’s set is an absolute highlight of the festival, and evidence of what a fine set of musicians they are. Catch them on their upcoming UK tour.

In an audience with Mark Radcliffe, the iconic broadcaster, writer and musician, regales us with a relentless badinage of entertaining stories, and remarkable insights about the experience of being a broadcaster. Touchingly he refers to Roy Wood as the UK’s unrecognised Brian Wilson, alongside a mischievous story about Roy’s teeth.

Damien O’Kane and Friends deliver an excellent set. The Close Of An Irish Day from the Areas Of High Traffic album is a set highlight. It’s a big anthemic song, sung brilliantly by Damien, with Peter O’Kane providing some fantastic staccato rhythms, playing deftly round the full extent of his drum kit.

Two linked banjo-led instrumentals, Phoebe’s and Daisy’s, dedicated to Damien’s two daughters, are another highlight. The first instrumental is very lyrical, and it sounds like there are two banjo players on stage, which is quite a tribute to Damien’s playing. The second instrumental picks up the pace, driven by Sam Kelly’s acoustic guitar and Damien’s banjo, both working in complete sympathy with each other.

Damien is joined by Kate Rusby on a lovely lilting ballad, where he unleashes a compelling and very melodic electric guitar solo. Damien is a very talented multi-instrumentalist, vocalist and songwriter, and it is well worth checking out his work, The Areas Of High Traffic album being a good starting point.

Martyn Joseph is one of our best troubadours, who speaks to the hopes of so many of us for a better world. Searching for America is a tour de force of a song, a love letter to America, searching for it’s soul. He segue’s the song quite magically into Bruce Springsteen’s Dancing in the Dark, and they become the one song.

Martyn’s song for the NHS, Nye, is a tender tribute to the vision of Aneurin Bevan, the founder of the NHS. He quotes Nye’s phrase “The purpose of getting power is to be able to give it away”, and asks all the NHS workers in the festival audience to stand up, which generates a spontaneous wave of applause and heartfelt thanks. A real moment of emotion and solidarity. Martyn deservedly receives a standing ovation at the close of his set.

Catrin Finch and Seckou Keita bring together the harp and kora, to create a sense of melodies floating and intertwining, laced with some incredible jazz style rhythms.

Listen To The Grass Grow, from the SOAR album, has an ethereal feel, with the two instruments in a dialogue, like two people in love in intense conversation. Other songs build a musical theme through the exchange of quick fire runs, to create some amazing soundscapes. Reflecting this beautiful music, the sun emerges again during their performance

Breabach, from Scotland, play an affecting song about missing your home, sung with stirring emotion by Megan Henderson with a very understated instrumental backing. A lovely song.

Knees Up witnesses all the instruments playing in soaring unison, against a driving rhythm from the double bass and guitar, and a fabulous shared vocal harmony. The final section of the piece sees all the musicians come to the front of the stage, as the double bagpipes bring the song home.

Ward Thomas and The Staves come to the rescue, at the eleventh hour, to finish off day two of the festival, with Honeyfeet and Saving Grace being unable to appear.

Country artists Ward Thomas begin their set, with a striking acapella version of Coldplay’s Yellow. Playing without their regular band, they perform a heart rendering version of Where The Sky Is. As Lizzy says from the stage, it feels an apt song for getting through the year we have just had.

A very strong reading of Cartwheels, from the album of the same name, brings out the deeply affecting emotions at the core of this very special song. A cover of Fleetwood Mac’s Landslide, with gleaming harmonies, speaks to the ability of Lizzy and Catherine to interpret and make a song completely their own.

The Staves, together with their exceptional band, bring the second day of the festival to a close. Best Friend, from the new album Good Woman, has great harmony vocals, gracefully flowing over a hard driving rhythm.

Careful, Kid, also from the new album, with flying high harmonies, has an intriguing use of ambient electronica that gives the song a really immersive quality. Blood I Bled, from the second album If I Was, is a song that challenges injustice and speaks to hope, and played live is just magnificent. The moving chorus of “If I was, If I am, If I did, If I have” is accompanied by some exquisite trumpet phrases, and an atmospheric marching beat.

Well done to both Ward Thomas and The Staves, for answering the call to help out Underneath The Stars, and for playing their hearts out.

Written by Gareth Allen, with thanks to Anne Robertson for her musical insights. You can find Gareth’s author profile here.