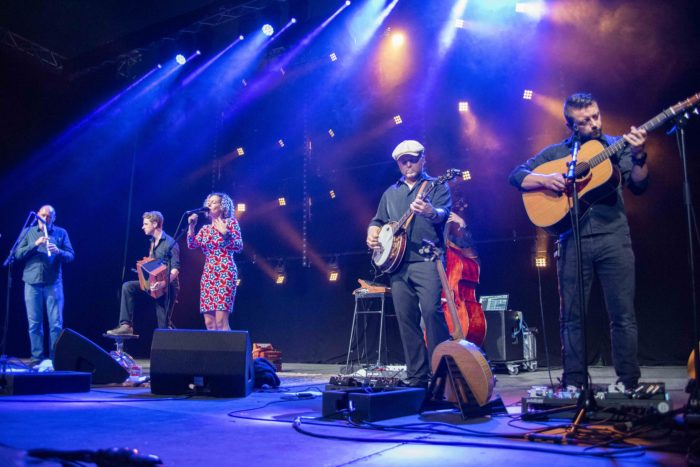 Underneath The Stars Festival

Three nights spent underneath the South Yorkshire stars as guests of the Rusby family at their now-annual folk shindig is tantamount to a mental detox. People pay tons of cash for serious and earnest professionals in stout armchairs to sort their lives out for them, whereas for the price of a weekend ticket and the glory of driving up the best stretch of the M1, you can recycle yourself into something altogether more useful to the world.

Several things strike you quickly about Underneath The Stars:

Festival MC Jack Harris had the honour of filling a large space on the stage in the main stage tent to open the 2018 UTSf (as it’s become abbreviated). Getting his set out of the way early doors so he could introduce his peers and indulge in a cocktail or two, he’s been slowly making his mark since his Wide Afternoon appeared some eighteen months ago. Along with Estbel, it was a subtle and crafted beginning. The latter, a superbly balanced, two male/two female quartet from Estonia and Belgium (Est – Bel, geddit?)  delivered a delightful set and sang wholly in Estonian. But “imagine it’s Gaelic and you’ll be alright,” was a most useful tip.

The return of the Kate Rusby & Sally Smith BFF partnership, in chat show form that went down so well in 2017, did a similar job this year. It was semi-planned with a few musical interludes where Sal added some very Mike McGoldrick whistle parts, as well as the duo sharing a pair of big knickers, curly wigs and getting the kids on stage. The chance to listen to a cassette recording of a fledgling Kate Rusby was irresistible. This could become a long running series or offer an alternative career path (it was miles better than bloody Loose Women).

The pick of the Little Lights stage was the force that is Grace Petrie, introducing herself as usual as a protest singer, fired up by her many fundamental –ists (leftist, femininst etc) and whose between-song banter is as entertaining as her material. Topical and passionate, humour and honesty and some finely-tuned songs are her watchwords; there’s a new album in the works too.

Much excitement was evident with the headliner of the opening night, Steve Earle and the Dukes. In hindsight, one of the picks of the weekend. Everyone knows Copperhead Road, but if that’s all, Friday ought to have started to widen your palette. If Tom Petty used to be able to fill Hyde Park, then Steve Earle deserves a vast audience. Not only is he musically spot-on but he’s also as cool as a full tent in a heatwave isn’t. An hour-plus of chilled-out country rock with a crack band was a perfect way to settle everyone into UTSf 2018. Cracking piece of scheduling there, Mr Joe Rusby.

It’s a healthy breakfast kind of festival, so after muesli and builders’ tea at the Once In A Blue Moon Café (can anyone conscionably drink coffee at Kate Rusby’s festival?), my Saturday began marching behind The Frumptarn Guggenband towards the main arena. They were very much the ever-circling skeletal family, macabre yet gaudy, made-up to look like the Grim Reaper, but dressed like the Grim Reaper attending a Pride event. Their energetic brass/oompah/samba rhythms earned them a following wherever they went.

Kizzy Crawford unveiled her trio for the first time in the Little Lights tent. After yesterday’s Estonian, we were treated to some cultural learnings in Welsh. Stand-out track, Shine, felt like it brought the beach to Barnsley, in an Ipanema-meets-Rhossilli kind of way. Later on the same stage, The Melrose Quartet helped us to add ‘gansey’ to our vocabulary, whilst moving us to tears with The Ballad Of Davy Cross – a song about the fragility of human life versus the sturdiness of knitwear.

The afternoon was no time for napping, with Ron Block and Damien O’Kane bringing America and Ireland together, bluegrass meeting green, green grass. Just to give the family-friendly festival a frisson, they peaked (so to speak) with The Mystery Inch, managing to play it down (so to speak) by including strains of TV themes from The A-Team and The Muppet Show. One of the weekend’s finest interludes was Martha Tilston’s set of songs from almost two decades at the fretboard. Fretting, however, is off the agenda once you’ve been treated to a Tilston life-laundry, as she dissects modern living and helps you to navigate through, and appreciate the “messy magic.”

“A much more accomplished songwriter once said that all great songs have universal themes. This one’s about growing up in Kirkwall.” Thus spoke Kris Drever of Lau, more or less summing up their set – humorous and eccentric, yet warm and personable. They manage sonic innovation and improvisation, pushing traditional notions of ‘folk’ to the most misty, sometimes craggy extremities of the genre’s soundscape. They treated us to an upbeat version of Winter Moon, counter-balanced by a more sparse Hinba, all augmented by their Heath Robinson-looking electronic noise machine named Morag.

USTf served us two more aces on the Main Stage front. If your own kids have sung in one of those junior ensembles where each individual keeps to their own time and key, then you might see ‘Youth Choir’ on the bill and start idly wondering if the beer tent is open. Booking The Barnsley Youth Choir and giving them such prominence epitomises the community spirit that we all benefitted from throughout the weekend. With members of the Children’s, Intermediate and Senior Choirs all participating, including a succession of enviously prodigious soloists, they were disciplined, polished and life-affirming.

The Ukulele Orchestra Of Great Britain didn’t so much close the Main Stage as ‘shut it down’, as the young folk apparently say. Harmonies, virtuosic plucking, the finest drollery from their absurd, sitting-down stand-up and a brief interlude of dancing all amounted to wide grins all around the packed tent. We rocked to AC/DC’s Highway To Hell and we danced to The Eurythmics’ Sweet Dreams so fervently that many people were starting to wonder why Dave Stewart had bothered with the synths in the first place and why he hadn’t just got himself a four-string mini-guitar thingy.

At some three-dayers, Sunday can feel gruelling. You want to enjoy everything, but you have a sleep deficit, a booze surplus and you’ve eaten your bodyweight in bread and potato products. At UTSf, Amythyst Kiah, provided a beautiful, soul-searching start to the day, bringing sounds reminiscent of Tracy Chapman and Joan Armatrading, especially with her version of Vera Hall’s Trouble So Hard (aka that song wot Moby sampled). Similarly, Maya Youssef’s assertion that “the act of playing music is the opposite of death” bore true, as we listened transfixed to her playing the traditional kanun, and giving us her visions from her album, Syrian Dreams.

Joanne Harris And The Storytime Band gave us tales, set to music, with accompanying projected illustrations. When you’re known for having one talent (in Joanne’s case, prose writing), it takes a hardy determination to put yourself out there in front of an audience doing something completely different (in this case, singing and playing the flute, as well as storytelling). There we all were thinking that this tale of a wild girl could make a splendid family TV animation, up to the point where the naked wild girl gave herself, heart and soul, to the young man, at which point it all got a bit complicated.

That wasn’t it for nudity, as Laura Cortese (fully clothed, before you ask) talked us through her teenage horror of her mother’s overwhelming desire to skinny dip, before her unconventional string quartet charmed us with Skipping Stone. You always want an exciting new discovery at a festival, and for many it was Jack Rutter who provided just that. He’s the sort of chap you would instinctively want to clone or take home (if either option wasn’t inherently weird). What prowess he showed in music, he matched with his skills as a raconteur. His love and respect for other people’s songs in turn made the audience joyful.

The benefit of having your own festival is that you can book yourself as a headliner. Fortunately, Kate Rusby warrants that status and her set was a celebration that we could all feel part of. Her usual backing band was augmented at times by Ron Block, Mike ‘The Floss’ McGoldrick and Sally ‘BFF’ Smith. We also had an appearance from Jason Manford, duetting on Falling Slowly from the film Once, and a caped crusader running down the central aisle as we all sang along to Big Brave Bill. From the quirkiness of Benjamin Bowmaneer or The Blind Harper, through the bounce of The Pace-Egging Song, to the poignant tribute to her Uncle Stanley of The Bitter Boy, we explored a full range of late-festival emotions. Standing at the end to sing The Blooming Heather with the whole Rusby clan on stage (including indomitable festival supremo, Emma Holling) was bittersweet. It was glorious, but it was over.

Primary conclusions to be drawn from 2018’s Underneath The Stars Festival:

You can find Underneath The Stars here.

Live photography by Mike Ainscoe. You can find more of Mike’s work on Louder Than War at his author’s archive. He can be found on Facebook and his website is https://www.michaelainscoephotography.co.uk

Live photography also by Brian Ledgard. You can find more of Brian’s work at https://www.bryanledgardphotography.com/