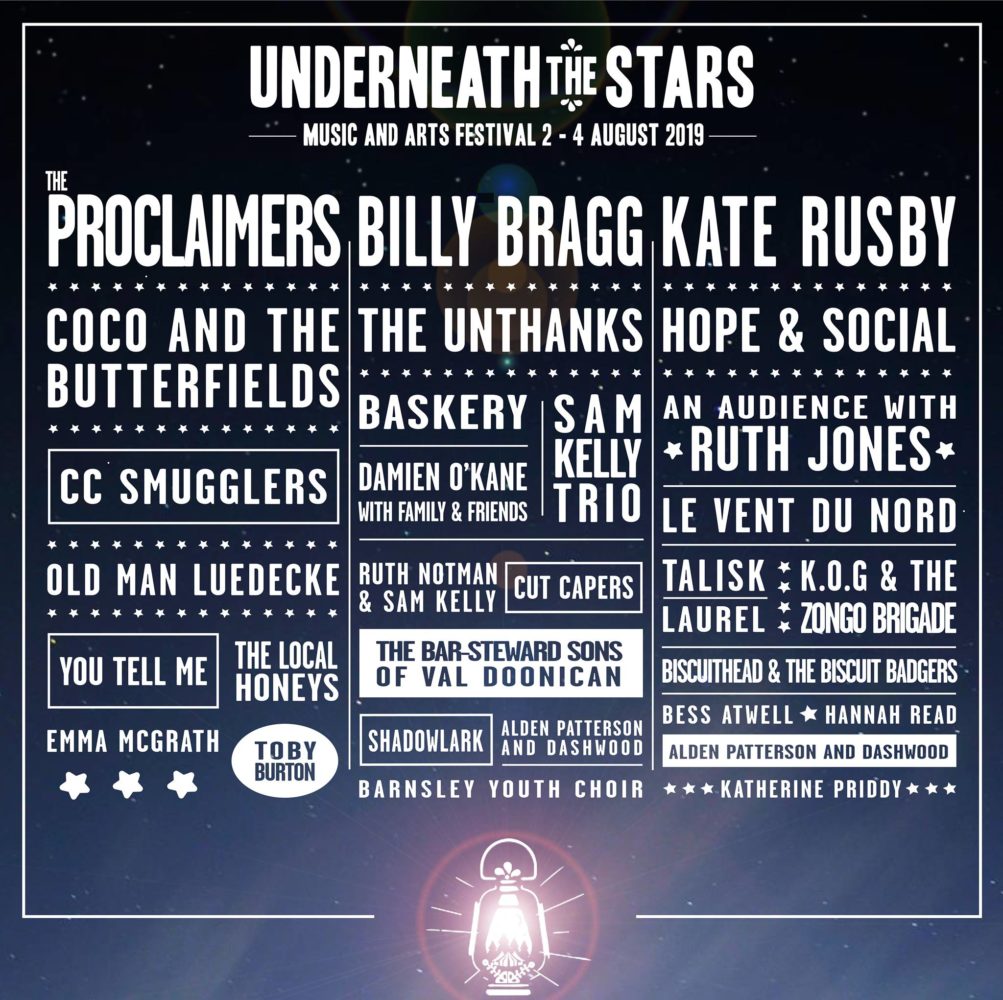 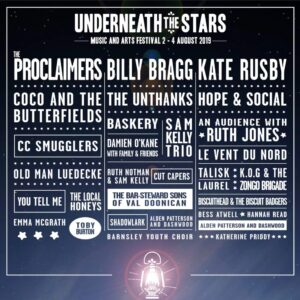 Underneath the Stars Festival

The 2019 Underneath the Stars Festival has sold out, and no wonder with its developing reputation for excellent and musically eclectic line ups, intimate and welcoming atmosphere, fabulous food choices, cultural happenings, and a big heart that embraces social justice. With fairy lights strung throughout the festival site at night, you really do feel you are underneath the stars.

The line-up this year is astonishingly good, and on Friday is headlined by the mighty Proclaimers. Charlie and Craig Reid have a great songbook to draw on, and their infectious warmth on stage and anthemic songs will without doubt fully involve everyone at the main Planets stage.

Appearing also on Friday, and highly recommended, is North London singer-songwriter Emma McGrath. This writer was lucky enough to catch Emma’s set in 2017, on the Den stage for new artists at the Cambridge Folk Festival. I wrote then that you could feel a sense amongst the audience that we were witnessing someone very special that we are going to hear a lot more of in the future. From the Silent Minds EP, the song Love You Better will give you a glimpse of what to expect.

Saturday brings us the quite wonderful Billy Bragg, who is a troubadour in the truest sense. Travelling towns and cities, sharing his insightful words set within great melodies that speak to our lives, living in both troubled times and times of hope and joy.

His music is constantly evolving and exploring new territory, as evidenced in his 2016 collaboration with Joe Henry, Shine a Light, which brought together songs recorded as field recordings across the great railway routes of the United States. Between the Wars is one of Billy’s most affecting songs, and his poignant playing of it tells you all to need to know about this great artist.

The Unthanks, on Saturday, are sure to be a firm favourite, bringing together the exquisite voices and musicianship of Tyneside sisters Rachel and Becky Unthank, and the arrangements and writing of Adrian McNally. The recent Lines trilogy of albums, with its themes of the Hull trawler disaster, the First World War, and the poems of Emily Bronte, demonstrates their incredible musical ambition. Definitely not to be missed.

And then there is the phenomenon that is the Bar-Steward Sons of Val Doonican, as recommended by our very own Mike Ainscoe, who will be covering the Festival with me for Louder Than War. Their version of hip-hop favourite Jump Around is apparently something to behold.

So to Sunday where a highlight, following on the theme that last year saw Andy Kershaw talk about his fascinating career, will be an Audience with Ruth Jones. Ruth is the award-winning writer of Gavin and Stacey, and is also a fabulously talented actor, and this should be a very engaging event.

The Underneath the Stars Festival would not be the festival it is, without Kate Rusby’s headlining set on Sunday. The festival is named after one of Kate’s songs and put together by the family production team that runs her record company and supports her live work. Kate’s set at last years Underneath the Stars Festival was full of powerful storytelling and spellbinding vocal performances, set to the most beautiful of musical arrangements played by a stunning ensemble of musicians. Kate’s deep empathy and emotional understanding of the joys and sadness that are a part of the human experience inhabits every one of her songs. We are lucky to have her.

Look out for Louder than War’s review of the Festival, and see you there.

All words by Gareth Allen. You can find more of Gareth’s writing for Louder Than War here