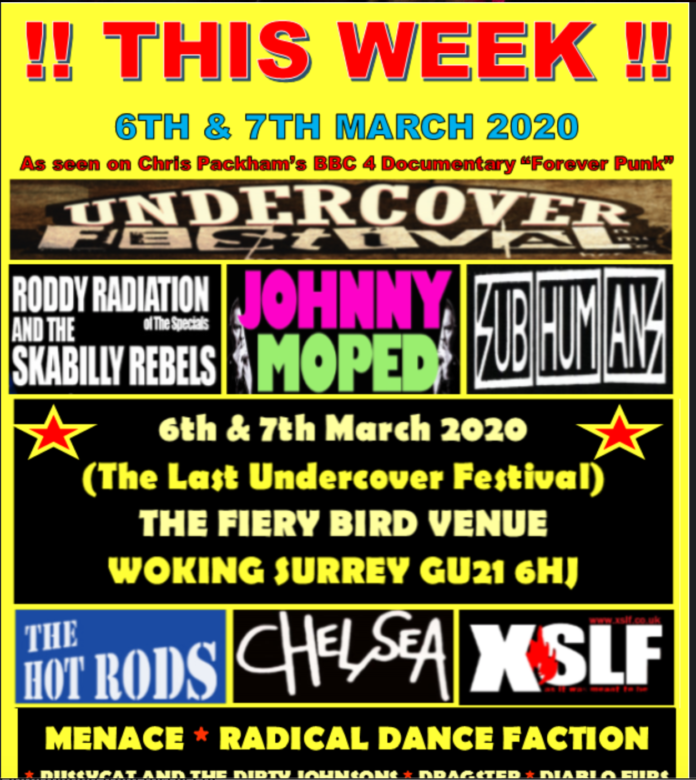 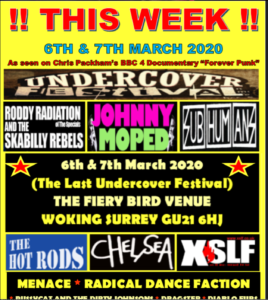 The final Undercover Festival comes back to its roots in Woking Surrey for an explosive finale on the 6th & 7th March 2020.

Now in our eight consecutive year in March 2020, back in Woking Surrey for our last ever Undercover Festival a small independent alternative music festival including punk, post punk, Ska and much more at The Fiery Bird Venue Woking Surrey.

We believe we have a reputation for being one of the friendliest small festivals out there, while we have downsized in venue size we still have an alternative music line up that any lover of alternative music will find more than appealing.

“It’s been somewhat of a nomadic existence for Undercover since we first emerged in 2013 from the ashes of the VLR stage of the much missed GuilFest.  Undercover back in the Woking area via 3 stints at Bisley, 1 visit to Brighton,  2 trips to the seaside in Margate, then one outing to Tufnell Park London, finally back at the Fiery Bird after last September presenting to you a veritable feast of alternative delights collectively called “Undercover Festival”

Plans are in place for an even better Undercover, we are putting the finishing touches to what we believe is a mouth-watering alternative music event with none of that X Factor schmaltz here”; said Festival Organiser Mick Moriarty.

Our message is come along and find out what the fuss is about.

Tickets are available online or paper tickets (remember them?) from All Ages Records in Camden, Banquet Records in Kingston Surrey, or at face value (plus gifts from) Sounds of the Suburbs RecordsRuislip.

Plus many other bands of ALL AGES to whet the appetite of any lover of alternative music.

As we say at Undercover

“See Ya Down The Front”

The HoT Rods touring in 2020 in memory of Barrie Masters, Eddie & The Hot Rods (Sat)

Pussycat and the Dirty Johnsons (Sat)

Line up subject to change at short notice