The Undercover Festival 2016 has announced its line up, and have also confirmed the festivals new location…

We took the opportunity to speak to organiser Mick Moriarty “Undercover Festival is back bigger and better with more stages and bands than ever before at our new home Brighton Racecourse. We are pleased to be able to move to Brighton, a city that is renowned for its appreciation of alternative “outside the box” music, and we are proud to add our festival to Brighton’s rich and varied culture.

Undercover is a 2-day festival of alternative music including Punk / Ska / Dub / Reggae / Alt / Acoustic + so much more.

The festival is one that prides itself on taking an independent and grassroots approach to things, and is always determined to be different from mainstream events; as the name suggests, it’s an indoor event but with two days of alternative action from bands you’d be highly unlikely to see on many other festival line-ups. 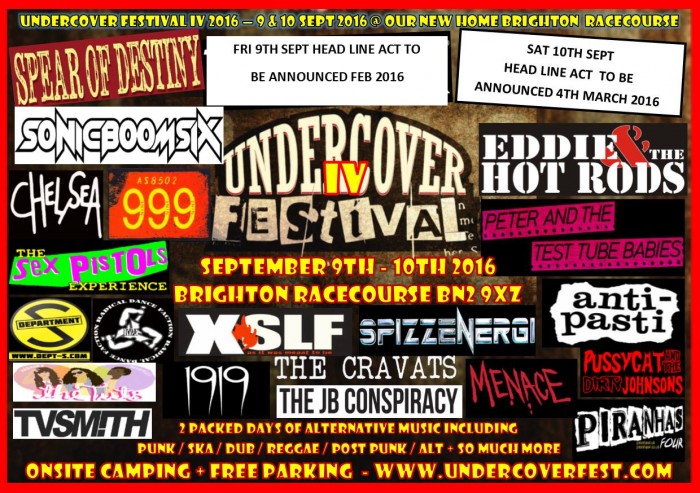 Mick added “We believe the usual run-of-the-mill festivals tend to book bands that in the main are broadly similar – and way too safe! We try for a line up and experience that is something different and appeals to a crowd not catered for elsewhere…Being a small independent grassroots festival is tough because media attention is always on the big boys. But we’ve got through to our fourth year and we’re going strong because what we have created really has struck a chord with people who like their music raw and full of the passion and energy that only acts like ours generate.”

Early Bird Tickets are on sale now via the festival Shop