Home News Undercover Festival 3 – Headliners for 2015 confirmed as The Damned and... 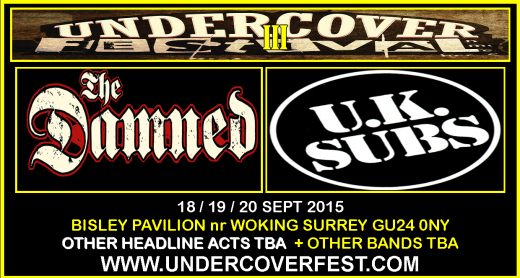 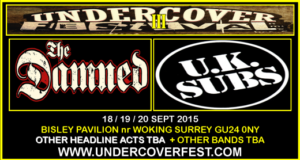 The Undercover Festival is firmly establishing itself as one of the most important festivals in the punk calendar; the festival organisers have today announced the dates for 2015 as:

In addition the headliners have been confirmed as The Damned and the UK Subs with a further headline band to be announced.

Other bands so far confirmed include Chelsea, TV Smith, XSLF, Dragster – a full list is on the festival website.

The festival which prides itself on running under the strapline – Punk / Ska / Dub / Reggae / Retro / Alt & Acoustic + what more can you ask for? has rapidly grown to be the premier alternative festival for the South East of England. The festival is set in the unique location of Bisley Pavillion, Bisley Camp nr Woking, Surrey.

Early bird tickets are already on sale and are selling very quickly – hardly a surprise at just £65 for the entire weekend. The early bird offer is due to end shortly, the price will then rise to £75, and will be £89 on the door.