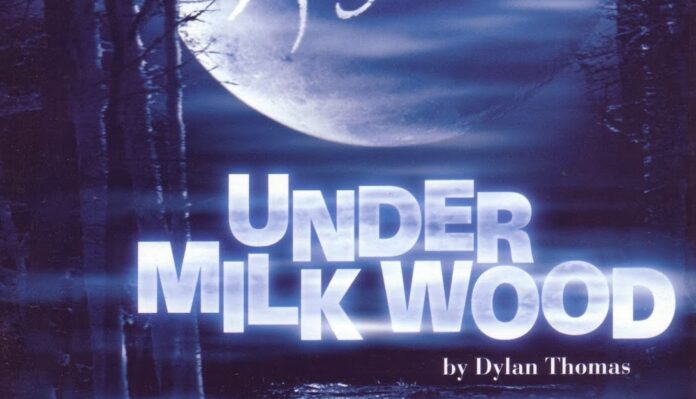 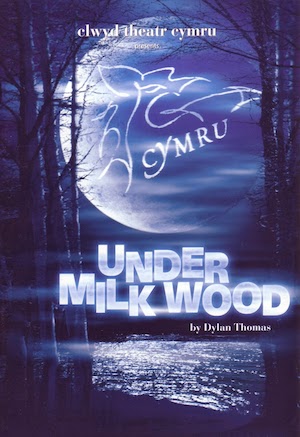 Sometimes luck can deal you a great hand and when it does the only thing to do is to go with it and enjoy the ride. When a call on the off chance for this sold out show saw us grab two returns, it was time to look forward to an enjoyable afternoon. We didn’t realise how enjoyable though as director Terry Hands has quite simply presented a brilliant production that brought much-needed sunshine into this storm-lashed corner of North Wales.

The Sir Anthony Hopkins Theatre had an unchanging but ideal set for this production, which enabled the fast moving narrative and inter-changeable scenes and characters to move with dexterity as they bring the events to life. The fictional village of LLareggub is set as a backdrop, but one in which the sun rises and sets ingeniously as the events of the day are played out. Clwyd Theatr Cymru staging of this classic is celebrating both the centenary of the birth of Dylan Thomas and 60 years since it was first broadcast by the BBC in January 1954. Tragically, Thomas himself had died two months before so Under Milk Wood had a massive impact at the time and remains a work of huge importance.

This all-Welsh cast all offer superb performances as each of them inhabit several of the characters with ease and readily identifiable traits. Owen Teale and Christian Patterson excel as the narrators, ensuring that we are always clear as to who is thinking what about who and where, not as easy as it sounds. There are so many brilliant characters in the production, with so many minor, yet fascinating thoughts and movements throughout the 24 hours in which it is set, that it is to the immense credit of the cast that all are delivered very strongly. What made it even better is that the cast are all clearly enjoying the performance as much as the audience and, at times, deserve huge credit for not collapsing into laughter as we all were.

Some memorable set pieces include the exchanges between Richard Elfyn’s Mr Pugh and the wife he fantasises about poisoning played by Sophie Melville, who also creates a marvelous Mrs Dai Bread Two among her other roles. Sara Harris Davies is also magnificent as a range of characters such as Mrs Organ Morgan and a nosey Mrs Willy Nilly, steaming open other people’s secret love letters and a hilarious exchange as Mrs Dai Bread One with Mrs Dai Bread Two. The sight of Steven Meo as a lusting yet frustrated Sinbad Sailors is a memorable one while Katie Elin-Salt as Mrs Ogmore-Pritchard is joyful in her relentless nagging of her two dead husbands. Ifan Huw Dafydd ( a ringer for Jet Black ) is masterful as Captain Cat and the philandering Mr Waldo, often perched on a rocking chair above the stage.

Under Milk Wood is essentially an everyday account of the lives of ordinary folk whose gossip and trivia is brilliantly recorded by the genius of Dylan Thomas. However, it must be remembered that it was originally intended as a radio broadcast not a stage play so seeing Caryl Morgan as Mary Ann Sailors shouting while the rest of the cast cringe, or Kai Owen as Evans the Death, forever concerned with his mortality, puts the narrative in context perfectly. However, the sadness within the laughter is perfectly captured when Simon Nehan, as the music and Eisteddfod-obsessed Rev Eli Jenkins, listens to Polly Garter singing of her deceased lovers before proclaiming “Praise the Lord, we are a musical nation”

Our time in LLareggub is all too brief and it’s just left to offer a well-deserved ovation for this production. Under Milk Wood is superb Welsh literature and this is superb Welsh Theatre.